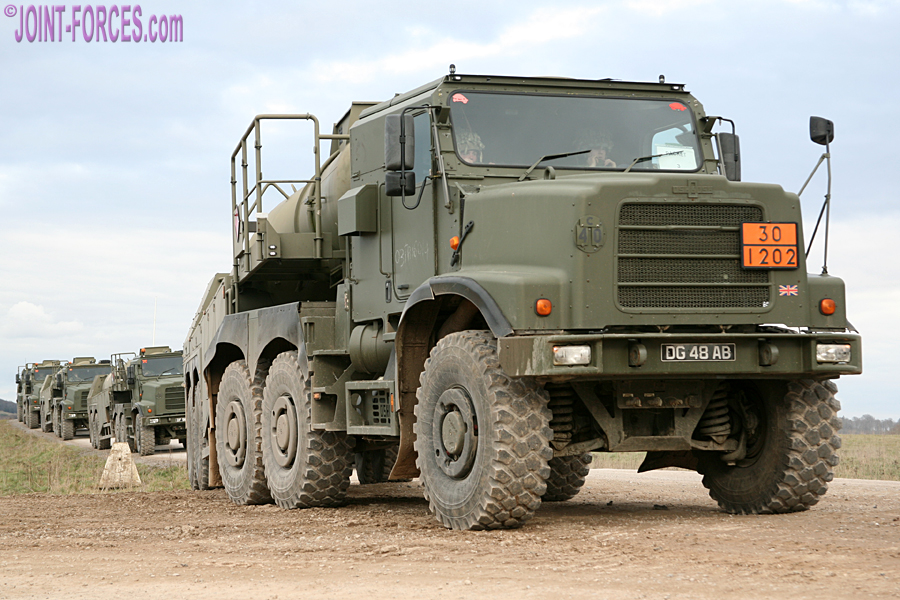 In this mini-series we look back at the now mostly over fifteen years old and well-travelled Oshkosh Tankers used by British Armed Forces, writes Carl Schulze.

To briefly recap, in the 1990s the UK Ministry of Defence launched a programme to replace several different kinds of in-service tankers. Initially called the Future Fuel Vehicle (FFV) programme, the name was changed in 2001 it was converted from a Private Finance Initiative (PFI) to a more conventional procurement and named Wheeled Tanker Programme.

The Wheeled Tanker Tractor: The 6×6 Wheeled Tanker Tractor is based on the tractor truck of the Medium Tactical Vehicle Replacement (MTVR) 7-tonne truck family, which is in service with the United States Marine Corps and the US Navy. In addition to tractor truck variants, the US fleet also includes cargo trucks, dump trucks and a wrecker. Development of the MTVR family took place in the late 1990s and the first vehicles entered service with the USMC in 2000, gradually replacing the 5-ton trucks of the M809 and M939 Truck Series.

The UK Forces Wheeled Tanker Tractor has a kerb weight of 12,050kg, is 6,980mm long, 2,550mm wide, 3,365mm high and has a wheelbase of 4,343mm. By folding down parts of the crew cab the height can be reduced to 2,489mm. According to information provided by Oshkosh Truck Corporation, the tractor/tanker semi-trailer combination can be transported inside a C-130 Hercules transport aircraft as well as in C-17 Globemaster III, both are in service with the RAF (though the last of the Herc fleet will shortly be cast) **. The 248x76x9.7mm formed channel chassis frame components of the tractor truck are manufactured from heat-treated carbon manganese steel and they are bolted together with Grade 8 bolts and huck bolts. The engine is mounted to the front of the chassis and the frame has a minimum yield strength of 758Mpa. The permissible Gross Combined Weight Rating of the vehicle is 40,000kg (legislative).

The Tractor is powered by a 6-cylinder Caterpillar C12 ADEM 2000 EURO III four-stroke turbocharged after-cooled diesel engine that develops 445hp at 1,700rpm. The engine is coupled to a six speed, 6F1R, Allison HD4560P electronically controlled automatic transmission which is followed by a single speed Oshkosh 30000 Series transfer case with planetary differential. The truck can reach a top speed of 85km/hr and is operated in full time all wheel drive. With a single tank filling of 400 litres it has a road range of 500km.

The standard crew cab of the vehicle is made of corrosion-resistant aluminium panels that are welded together; the cab can be armoured, but we will cover this in Part 3. The windshield, roof, sidewalls, door frames and rear wall feature hinges and can be folded down. A circular hatch is situated in the roof. Inside the cab, seating is provided for the driver and up to two passengers and provisions for two bunks are also incorporated. The instrument panel is of modular design and includes Metric/Imperial colour band gauges. The electrical system of the vehicle runs on 24 volts and incorporates a 150amp 24-volts alternator and four 12-volt 625 CCA batteries. A NATO slave start receptacle allows the vehicle to be jump started in case the battery is run flat.

The Shepard integral power steering of the tractor truck offers a steering gear ration of 18:1. Instead of classical axles the Wheeled Tanker Tractor Truck uses the TAK-4 system that was developed by Oshkosh; axles have made way for control arms to which the wheels are mounted and which are suspended by coil springs. The TAK-4 system offers outstanding mobility when the vehicle is operated off-road. This capability is further increased by a Central Tyre Inflation System or CTIS, manufactured by Dana, that features pre-sets for use on highways, cross country, in mud/sand/snow, when the vehicle is fitted with armour, and for emergencies. A run flat function continuously checks the air pressure of the tyres and adjusts it at 15 seconds intervals. In the case of a punctured tyre the system therefore ensures that the pressure is maintained. Michelin 16.00R20 XZL tyres are mounted on the two-piece bolted 508x254mm steel rims.

The vehicle can ford water obstacles up to a depth of 1,500mm and can climb grades of up to 34%. The curb-to-curb turning radius of the tractor is 22.5m. The vehicle can be operated in a temperature range from –46°C to +49°C. The dual circuit service brake system of the vehicle features air actuated drum brakes and incorporates a Bosch ABS. The parking brake incorporates spring brakes on the 2nd and 3rd axle.

The fully oscillating fifth wheel of the Wheeled Tanker Tractor truck is manufactured by Holland Neway and can accommodate 89mm kingpins; it can tilt 40° forward, 25° rearward and 5° to each side. The vertical fifth wheel load is given as 14,515kg. Some Wheeled Tanker Tractors were fitted with a special Winterisation / Waterproofing Kit which was installed at the factory during production and included a fuel-fired heater that heats the engine coolant and transmission oil pan. This version also includes batteries for use in climates of NATO C2 category (down to –46°C / humidity tending to saturation) and venting to increase the fording level. The tractor was designed for a 70% off-road mission profile.

Common Semi-Trailer Technology: All three types of tanker semi-trailer procured under the UK Wheeled Tanker programme feature an SAE 89mm kingpin with a design height of 1,796mm. The two BPW Model 10110 E36 Eco Plus non-driving axles of the semi-trailers are each rated for 10,000kg and feature air suspension; Michelin 16.00 R20 XZL tyres are used. To the front on the left side of the liquid tanks is situated a spare wheel mount and a boom with hoist has been mounted for lowering and lifting the spare. The brake system of the trailers includes air operated BPW S-Cam drum type brakes as service brakes and in addition to this a BPW S-Cam spring brake on the first axle serves as parking and emergency brake.

Close Support Tanker Semi-Trailer: The bulk of the originally procured semi-trailers were of the Close Support Tanker type and a total of 218 semi-trailers were procured. Together with a Wheeled Tanker Tractor the semi-trailer becomes the Close Support Tanker or CST combination. The CST semi-trailer features a single compartment, tank with three lateral and two longitudinal baffles, that consists of cylindrical and conical sections with domed ends. It is made of hot-rolled AISI 304 stainless steel and its shell is 4.6mm thick. Up to 20,000 litre of diesel or jet fuel can be transported in this tank. To the front, on top of the tank, is situated a manhole with a diameter of 249mm and a hinged fill cover. This manhole is surrounded by a 500mm diameter tank flange. The standard equipment of the tank includes a contents gauge as well as an overfill protection system.

The Alfons Haar pump module is mounted behind the tank to the rear of the semi-trailer. It includes a self priming FPOS 100/1308 A142 R vane pump with a pumping capacity of 1349.5 litres per minute, two ground earth cable reels and cables, an Alfons Haar MKA 2290 fuel meter and two hose reels with hydraulically powered rewind. On the hose reels are stored 15-metre hoses that feature terminating 50.8mm Unisex couplers to which fuel nozzles can be attached; these belong to the on-board equipment of the semi-trailer and convert it into a massive mobile fuel station. When the fuel servicing system is operated the brakes are automatically applied by an interlock system. This semi-trailer has a gross weight of 26,900kg and is 10,389mm long.

The tank of the TAR trailer can hold 15,000 litres of jet fuel in its single compartment tank. This tank has been constructed of cylindrical and conical sections with domed ends and features two lateral and two longitudinal baffles. Like the tank of the CST, it is made of hot-rolled AISI 304 stainless steel and its tank shell is 4.6mm thick. To the front on top of the tank is a similar manhole to that of the CST. For measuring, a contents gauge with external reading display has been fitted.

To the rear of the TAR trailer is mounted an Alfons Haar pumping module; its longer housing and the shorter tank are the immediate identifiers between the TAR and the CST. The self-priming FPOS 100/1308 A142 R vane pump incorporated in it has a pumping capacity of 1349.5 litres per minute. Like the hose reels of the CST, those of the TAR feature a hydraulic power rewind but they are much bigger and feature 30-metre long hoses to allow two helicopters to be refuelled in the field. Again these hoses feature 50.8mm terminating Unisex couplers at their ends. Two fuel meters, one MKA 2290 and one MKA 800, also belong to the pump module. The semi-trailer is 10,500mm long and has a gross weight of 23,300kg.

The third tanker trailer variant is the CST (W) for water, which we will cover in part three along with the later ILET (Interim Light Equipment Trailer) and the armoured cab option.

**Note: Following publication of this article WO Airportability JADTEU has confirmed, through Twitter and with images, that the combination is also airportable inside A-400M Atlas.