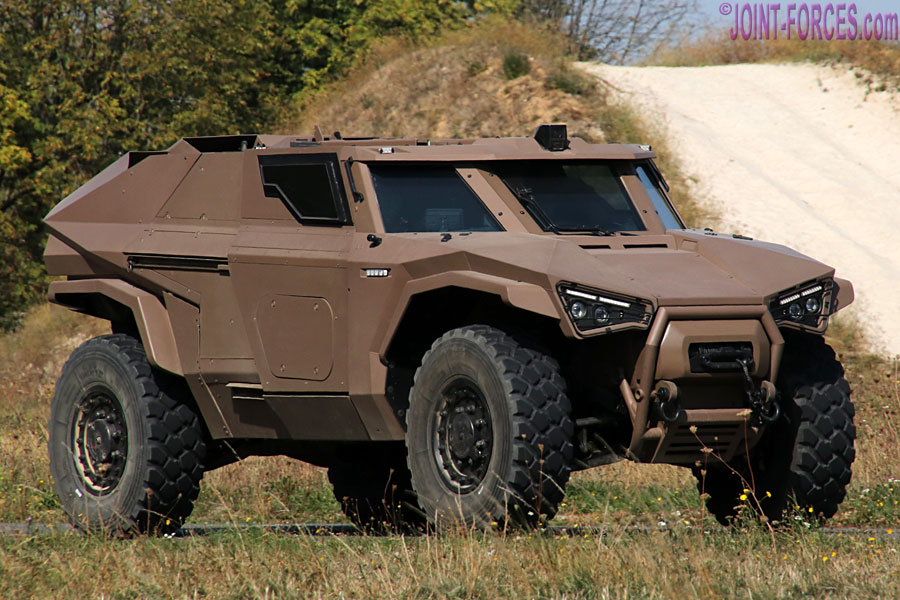 The Arquus SCARABÉE, or Scarab in English, is a private venture armoured light reconnaissance vehicle intended as a VBL replacement, writes Bob Morrison.

The original Panhard VBL (Véhicule Blindé Léger or Light Armoured Vehicle) is now 35 years old and although well proven by French Forces on both combat and peacekeeping operations in numerous theatres, even the recently upgraded VBL Ultima version is unlikely to meet future needs for a recce vehicle to work alongside the next generation French Army EBRC Jaguar and VBMR Griffon 6×6 armoured vehicle fleet.

In June 2018 French manufacturer Arquus, formerly Renault Trucks Defense and owner of the Panhard and ACMAT brands, unveiled their new light reconnaissance vehicle to a select few at the Eurosatory defence expo and the following year at the Paris Air Show the SCARABÉE (Scarab) was introduced to the public as a static exhibit. It had been intended that this private venture vehicle would be put through its paces at Eurosatory 20 in Paris this June, but the COVID-19 pandemic forced the expo to be cancelled. However on a hot September day, when virus spread was comparatively low, a socially-distanced company event was laid on at the Satory test track on the outskirts of Versailles which allowed the accompanying photographs to be taken.

The French Armed Forces have a future requirement for a VBAE or Véhicule Blindé d’Aide à l’Engagement, possibly best translated as Armoured Engagement Support Vehicle, to keep up with its new 6×6 armoured vehicles and SCARABÉE has been privately developed by Arquus with this very much in mind. By the time the VBAE programme formally commences, Arquus hopes to have a fully proven solution to hand but because several other armoured vehicle manufacturers will no doubt also chase this requirement the company is very wary about revealing too much detail to its potential competitors; we therefore have no accurate technical specifications to bring you at present.

Although the SCARABÉE bears a passing resemblance to the Panhard CRAB, unveiled at Eurosatory 2012, it is actually a totally new design created by a dedicated six-strong team of Arquus engineers in late 2017 and early 2018. SCARABÉE is also both considerably smaller and lighter than CRAB, being only around 1900mm tall to top of hull and tipping the scales at no more than 8,000kg GVW – of which 2,000kg is available for payload. In standard configuration the vehicle can transport four troops in a diamond seating arrangement, with the driver centrally positioned with 180° vision, and it is anticipated that a Remote Weapon Station such as the Arquus HORNET will be fitted to suit customer requirements.

As befits a next generation vehicle which is expected to enter full service by 2030, if selected for VBAE, and which would probably remain in service until 2050, SCARABÉE is hybrid-powered with a 300hp diesel engine and 75kW electric motor; both positioned to the rear on easily accessible slide-out cassettes. In boost, or ‘bug-out’ mode both power sources would pull together and in overwatch the electric motor would allow silent repositioning.

Not only does the vehicle have permanent 4-wheel drive but it also has 4-wheel steer if required and its party trick is the ability to travel partially sideways like a crab; this ability actually has serious uses as it markedly increases manoeuvrability when working in combined spaces or negotiating obstacles and tackling severe off-road conditions. When moving off-road the ground clearance can be increased to 500mm but when travelling at speed on roads or if being transported by helicopter it would be dropped to, a still very acceptable, 400mm.

The prototype photographed here has sliding doors, making it easy to get in and out in tight conditions; such as when being transported by air or if working in urban confines. SCARABÉE has also been designed to allow it to be inserted by parachute, on a pallet, with airborne troops or air-landed by transport aircraft supporting Airborne and Special Forces; it is also feasible for this light recce vehicle to be inserted by LAPES (Low Altitude Parachute Extraction System) if a suitable airfield is not available.

In standard configuration SCARABÉE is lightly armoured with composite materials but where threat levels are higher additional ballistic and mine protection measures can be added to the crew compartment, which is a ‘survival pod’ situated between the wheel stations to give additional protection from landmines. The tyres, which are Michelin XZL 365/80R20, can accept runflats so no spare it fitted and although not on the demonstrator it is expected that a CTIS (Central Tyre Inflation System) would be standard for in-service vehicles.

Describing their new baby, Arquus says: “Capable of engaging the adversary with its own weaponry, the SCARABÉE is also able to operate in synergy with other vehicles within a dedicated Task Force, thanks to its communication and vetronic systems. The first born of Arquus, the SCARABÉE is a perfect illustration of the DNA and the history of the brands on which Arquus was built. The SCARABÉE is the worthy successor to the armoured vehicles that have forged the reputation of Panhard, Renault Trucks Defense and ACMAT for almost a century. The SCARABÉE thus combines mobility, protection and firepower, elements that have been central to the history of cavalry and armour for decades, from AML and EBR to ERC and VBL. Like its predecessor, the VBL, this light armoured vehicle is well suited for reconnaissance and illumination missions, including behind enemy lines. The SCARABÉE has very high-level information and communication systems on board, which allow it to fulfil the roles of a reconnaissance vehicle, or a versatile cavalry vehicle. Thanks to its mobility, speed and stealthy figure, the SCARABÉE is an extremely difficult target to spot, identify, engage and hit.”

Footnote: Arquus specifically requested that I did not photograph some design aspects of the rear suspension and steering detail so in a few of the accompanying photographs some areas have been pixellated and shadows darkened to obscure specific aspects ~ the alternative todigital manipulation would have been to only publish photographs of SCARABÉE from the front.