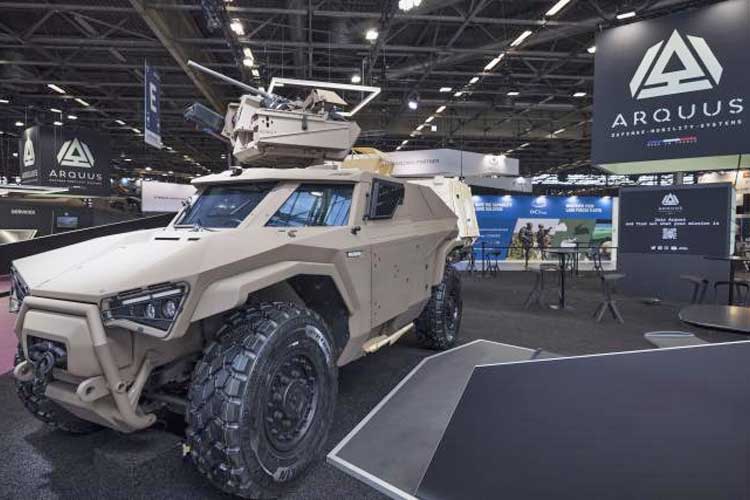 Commercialised since IDEX 2021, true showcase of Arquus’ innovative know-how, the Scarabée is revealed in a new swinging doors version.

Press Release, Versailles, 28 July 2022: The initial sliding doors represent a unique innovation in the military field supported by the Scarabée project, as well as the hybridisation and survival cell. From an operational perspective, these doors allowed for open-door operation with a direct 180-degree view of each side of the vehicle.

This feature, integrated into a scouting vehicle, allowed for great versatility and better interaction of the onboard staff with the environment. However, the feedback of the operational staff shows that the swinging doors provide better protection for disembarked soldiers. The Arquus teams have therefore worked on a swing door version of the Scarabée.

Efficient and innovative design procedures: The initial requirements specifications included some constraints that immediately gave direction to the work to be done:

A meticulous integration requires a surgical implementation. Instead of starting with a CAD view that was too perfect for a previously used prototype, a 3D scan of the vehicle was performed. The engineers Charles and Michaël designed parts that fit perfectly with the real vehicle. The use of assembly methods from the automotive industry results in a greater efficiency. The redesign of the Scarabée ‘s door system would not have been possible without the excellent coordination between engineers and prototype technicians.

Technical innovation coupled with operational gains: Maintaining the level of protection implies integrating the door in such a way that guarantee a perfect seal at the joints. Also, for reasons related to both design and security, it was decided to keep a model without handle. The Scarabée retains its smooth appearance and does not offer any grip to a hostile crowd.

The doors are equipped with a system of cylinders, allowing to manage the effort to be provided according to the inclination of the vehicle. The opening system is adaptive and proportional: the driver can control the speed. The combat lock system has been retained and allows the door to be locked manually from inside the vehicle. A door opening system from the outside has been designed for emergency situations.

Integration of the swinging doors has made possible to gain height on the passenger compartment for the driver’s comfort. They benefit from a 90° opening, facilitating the access to the vehicle and the protection of soldiers behind the door.