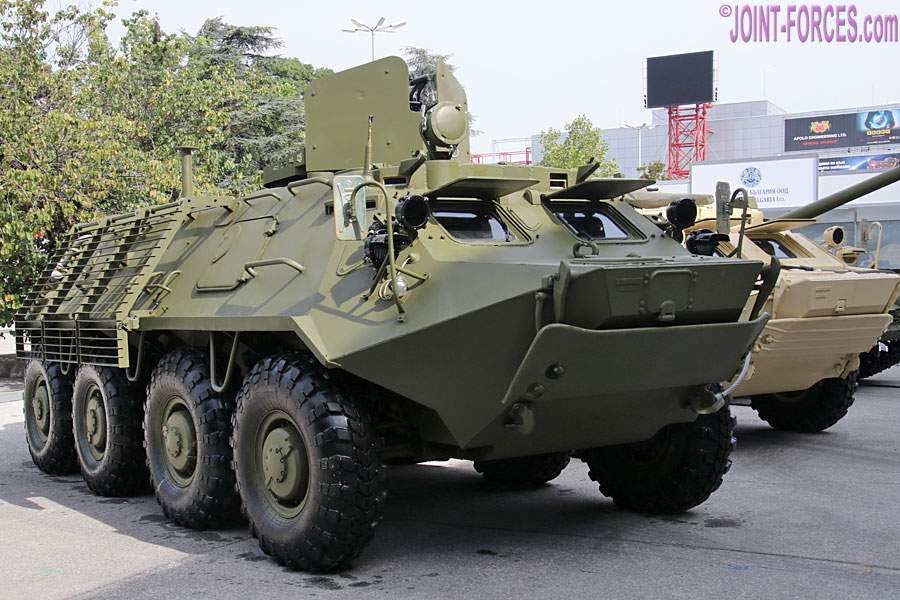 In 2018 the Bulgarian government announced its intent to procure a new 8×8 Mechanised Infantry Vehicle to replace the legacy BTR60-PB fleet, writes Bob Morrison.

At the start of October 2020 the tender bids from the two remaining of four companies competing for the Bulgarian 8×8 armoured vehicle requirement were opened* and shortly afterwards at the HEMUS 2020 defence and security expo in Plovdiv (where most of the accompanying photos were taken) word spread that GDELS and Patria had been down-selected for Phase 2 evaluation and the other two had been unsuccessful.

On Monday 5th October Finnish manufacturer Patria announced via a Press Release that their AMVXP or AMV-XP (Armoured Modular Vehicle – XP) was one of the pair of 8×8 multi-role armoured vehicles selected by the Bulgarian MoD. Spanish-based GDELS (General Dynamics European Land Systems) was the second manufacturer chosen but when we asked them for details an official spokesperson told us: “GDELS is not planning to release any press release or official comments.” We were, however, able to pick up sales brochures from both company stands for reference.

GDELS is offering PIRANHA 5 (aka PIRANHA V) which is the fifth generation of the originally Swiss-designed MOWAG Piranha. This vehicle has entered service with Denmark and Romania and is under production for Spain (as Dragón) and Switzerland. Measuring 8,000mm by 2,800mm wide by 2,400mm to top of hull, the basic infantry variant has a GVW of 33 tonnes of which available payload is 14.5 tonnes. The version proposed for Bulgaria would be powered by the Scania DC13 Euro III engine through a 7F2R ZF automatic gearbox giving a top road speed of 100km/hr and an amphibious speed of 4km/hr. Drive is either 8×4 on-road or 8×8 off-road and range is given as 1,000km.

Patria is offering the latest version of their AMV 8×8, the XP model offering ‘eXtra Payload, eXtra Performance, eXtra Protection’, which is on order with Slovakia and for the last year has been involved in trials in Japan; earlier AMV versions are in service with several nations including Poland, as the KTO Rosomak. Measuring 8,400mm by 2,800mm wide by 2,400mm to top of hull, the basic infantry variant has a GVW of 32 tonnes and a maximum payload of 15 tonnes. Although neither engine nor gearbox make is mentioned, specifications suggest the vehicle offered by the Finns to Bulgaria will also be powered by the Scania DC13 Euro III engine through a 7F2R ZF automatic gearbox and top road speed is given as >100km/hr with an amphibious speed of 6-10km/hr. Range is given as 600-1,000km.

The two vehicles ruled out before the end of Phase 1 were the French VBCI from Nexter and the German Boxer from ARTEC. The French company had a presence at HEMUS 20, but only displayed models on the indoor stand they shared with John Cockerill Defense rather than a full-size demonstrator. The German consortium did not appear to be present at the expo.

A third full-size wheeled infantry fighting vehicle, the Otokar ARMA 8×8 from neighbouring Turkey, was also present at HEMUS 2020. An original submission for the Bulgarian programme, this vehicle did not make it through to the first phase selection of four invitees. However its Turkish manufacturer believes there is still a place for this vehicle with the Bulgarian mechanised infantry battalions, who urgently require 90 wheeled armoured vehicles with 30mm turrets plus 60 more vehicles for supporting roles to replace their legacy BTR fleet from the 1960s; a fleet which is almost as old as the UK’s FV430-series tracked APC fleet.

Word started to spread at HEMUS 2020 that both of the accepted Phase 2 bids for the 8×8 contract had exceeded available budget and, although field evaluation of the AMVXP and PIRANHA 5 demonstrators seen here will progress over the next few months, it is not beyond the bounds of possibility that the current requirement might be cancelled and a new programme initiated. In that case, assuming regional politics does not get in the way, the ARMA 8×8 might just get a second chance. Now in service with the United Arab Emirates, as the Al Jasoor RABDAN, the ARMA 8×8 is a fully developed platform.

* Bulgarian MoD News Release, 02 October 2020: [auto-translation] The price offers of the two companies – General Dynamics and Patria, admitted to the next stage in the procedure for the implementation of the project for combat armoured vehicles of the Land Forces, were opened today, October 2, at the Ministry of Defence. The opening of the offers was attended by the Deputy Minister of Defense Anatoliy Velichkov, the Commander of the Land Forces, Major General Mihail Popov, representatives of the companies, as well as directors of directorates from the Ministry of Defense.

The interdepartmental working group will evaluate the submitted price proposals. Field tests of the proposed machines are to be carried out to check the compliance of the declared parameters with the set tactical and technical requirements for the mechanised unit (armament and mobility) and the communication and information systems of the armoured combat vehicle. With the participants who have successfully passed the field tests, negotiations will be held to improve the bids, after which they will be ranked in descending order.

The Interdepartmental Working Group will prepare a report to the Minister of Defence on the results of its activities, containing a ranking of the participants, as well as a proposal for selection of a contractor or for termination of the procedure.

On 6th October the Pentagon announced: Secretary of Defense Dr. Mark T. Esper met with Bulgarian Minister of Defence Dr. Krasimir Karakachanov at the Pentagon today. Secretary Esper noted that Bulgaria is a frontline NATO Ally and expressed his appreciation for Bulgaria’s commitment to the Alliance.

Secretary Esper and Minister Karakachanov signed a 10-year ‘Roadmap for Defense Cooperation’, affirming the mutual defence commitment as strategic partners. The roadmap establishes a framework for the continuous development of Bulgaria’s military readiness and capabilities over the next decade through sustained defence cooperation.

Footnote: A combination of UK quarantine restrictions (following my earlier visit to Arquus at Satory) and reduced flight availability into Plovdiv limited my visit to HEMUS 2020 to the last day, when two of the above vehicles had unfortunately been moved from their stands in preparation for onward transportation – hence the covered turret and low-loaders.