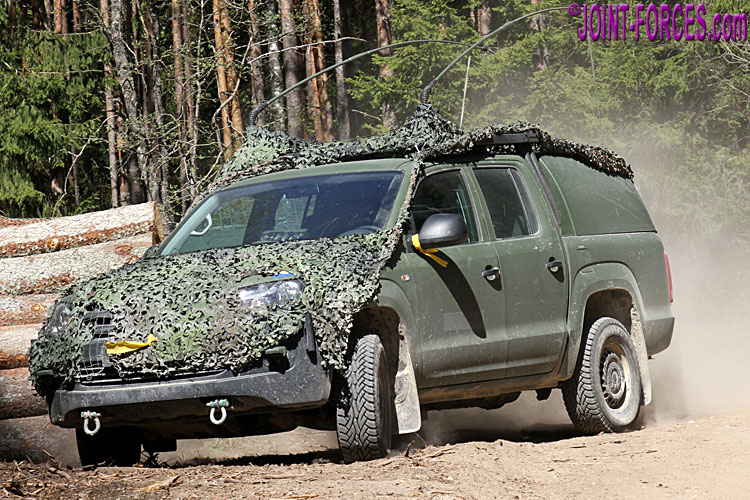 For two decades the Royal Netherlands Armed Forces primarily used the Geländewagen until 2014, when they introduced the Volkswagen Amarok LMPV, writes Bob Morrison.

First proposed for military service at Eurosatory 2012, by Rheinmetall MAN Military Vehicles as the Amarok M Light Multi-Purpose Vehicle, this militarised version of Volkswagen’s Argentinian-designed and Hanover-assembled 4×4 pick-up was procured by the Dutch Ministry of Defence (MinDef) in September 2013.

Entering service across all branches of the armed forces in 2014/15, with 1,667 being procured through the Dutch Volkswagen dealer Pon, the 1,138-strong Dutch Army Amarok fleet is scheduled to remain in service until at least 2024 (according to the 2018 NL Defence White Paper). We first photographed the Amarok in operational Dutch service in both Estonia and Lithuania in 2017, where it was serving with the Royal Netherlands Army contingent of the NATO eFP (enhanced Forward Presence) mission to the Baltic States. More recently, we had the opportunity to photograph several examples tasked with providing Host Nation Support to the US Army during the opening phase of the now cancelled DEFENDER-Europe 20 deployment.

The following Rheinmetall Press Release from June 2012 outlines the basic features of the Amarok M, which I believe at the time Rheinmetall were looking to pitch at a forthcoming Bundeswehr requirement later filled by the Nissan Navara, but that is a story for another day:-

Düsseldorf 11 June 2012 : Outstanding mobility both on and off road, flexibility and reliability – these are the chief features of the lightweight all-terrain vehicles in service with armed forces around the globe.

Rheinmetall MAN Military Vehicles (RMMV) has now expanded its product portfolio to include a commercial off-the-shelf vehicle in the below 3.5 t class. RMMV is displaying its new Amarok M Light Multi-Purpose Vehicle (LMPV) for the first time at this year’s Eurosatory.

The Amarok M is a light multi-purpose vehicle that can be readily configured to meet individual customer requirements. Different equipment kits enable it to perform a wide range of missions. During the development process, RMMV placed great emphasis on meeting the twin military requirements of maximum modularity and ergonomic design.

¤ The vehicle interior is spacious enough to seat up to four fully equipped soldiers.

¤ At a total vehicle weight of three tonnes, the Amarok M can carry a payload of up to 1.37 tonnes (with the basic cab).

All-wheel drive, an off-road anti-blocking system, an advanced, high-performance diesel or petrol-fuelled engine (90 to 132 kW, Euro 5), and a choice of eight-gear automatic or six-gear standard transmission combine to assure high mobility whether on hard surfaces or off road. An engine output of up to 180 HP (depending on the configuration) delivers a maximum speed of 180 km/hr as well as 1.26-tonne payload (with a double cab), or 1.37-tonnes with a basic cab. As an alternative to a loading area with a capacity of 2.5m² (double cab) or 3.57m² (basic cab), the chassis can be modified in accordance with customer requirements for a variety of different missions.

According to the Dutch MinDef, “The Volkswagen Amarok pick-up truck is intended for passenger transport and transport of personal equipment and cargo in peace management (exercises) and for national tasks. The off-road vehicle is indispensable for the mobility of Defence.

“The Amarok is a civilian vehicle. Because it is produced in larger numbers than military vehicles, Defence saves on purchase costs. Savings are also made on maintenance. Defence will now outsource this to dealers of the importer, Pon, both inside and outside the Netherlands. The Armed Forces no longer have to train their own technicians. Pon’s extensive dealer network guarantees quick breakdown assistance in the commonly used exercise areas in Germany, Norway and Spain, among others.”

Official MinDef sources state that all Amaroks are double-cab versions but the rear structure differs; 1,389 have a hard top, 144 have a canopy and 134 have an open cargo tray. Seating is for driver and three passengers. Although the base vehicle is civilian, a number of modifications have been made to militarise it:-

Powered by a 2-litre in-line four-cylinder diesel engine producing 103kW, the Amarok has a top road speed of 160km/hr and a range of 878km. It measures 5300mm long by 2090mm (without mirrors) wide by 1800mm high and weighs 2290kg empty or 3040kg with 750kg of load. It is 4×4 with electronic stabilisation and anti-slip and assistance programmes for climbing and descending hills.