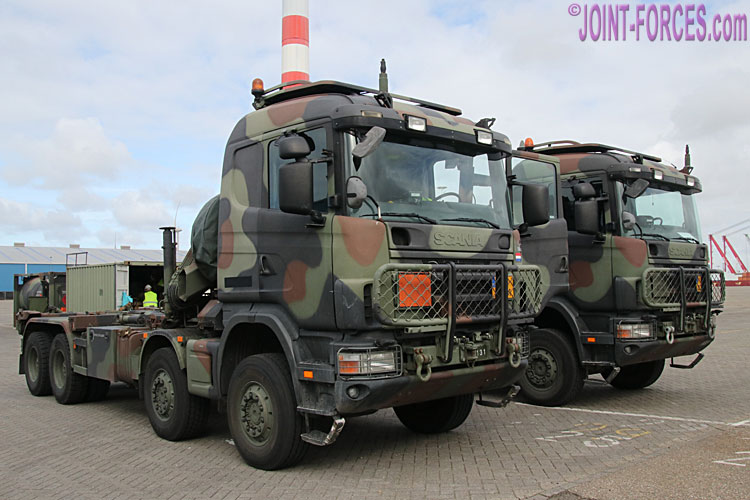 It had been intended that a DEF20 Media Day, to showcase the unloading (i.e. disembarkation of vehicles) of the Military Sealift Command vessel USNS Benavidez and the transport tasks of 104 [UK] Logistic Support Brigade, would take place in the port of Vlissingen-Oost on Saturday 14th March but the COVID-19 pandemic put paid to that.

Both US Army Europe (USAREUR) and the Netherlands Ministry of Defence (MinDef) media offices invited JOINT-FORCES.com to cover planned events in the southern Dutch port that weekend – though UK MoD once again overlooked us – and I hoped to cover the Host Nation Support element in addition to the disembarkation and forward transportation aspects. Having previously covered DEF20 vehicle disembarkation at Antwerp in Belgium I was aware that it was the host nation’s job to top up the fuel tanks of military vehicles coming ashore from the Ro-Ro carriers and heading onwards to Germany, so I was keen to photograph this if possible.

As luck would have it, by the time I had flown across to Amsterdam from London and then driven my hire car down to Vlissingen on the morning of the 13th the Americans had announced the decision that no more US troops would be landing on the European side of The Pond. In response, and with their own country on the verge of lockdown, the Dutch MinDef started to pull their logistics vehicles and troops out of the Temporary Military Village on the dockside but fortunately I arrived on the scene just in time to grab the accompanying snaps of the Scania PLS trucks from 130 Clustercompagnie ‘Asterix’.

Part of the Bevoorradings-en Transporttroepen Commando (B&TCo) or Supply & Troop Transport Command, which is subordinate to the Operationeel Ondersteunings Commando Land (OOCL) or Land Operational Support Command, 130 Cluster (Distribution is possibly the closest English equivalent) Kompagnie ‘Asterix’ is one of seven operational companies which can be broadly compared with their British Royal Logistic Corps (RLC) equivalents. Their main role as part of B&TCo, which was established in April 2014, is to provide ammunition, fuel, food and water for all Dutch Land Forces missions, exercises and deployments. The primary means they use for transporting bulk supplies is a 550-strong fleet Scania R124 CB 8×8 HZ420 PLS (Palletized Load System) all wheel drive trucks. Similar in concept to British Army DROPS (Demountable Rack Off-load and Pick-up System) trucks, these Scania trucks built in Zwolle entered service 2004/5 and have just had the OSD (Out of Service Date) extended to late 2029.

As I had suspected, the Koninklijke Landmacht (Royal Dutch Army) had indeed set up a refuelling point on the dockside at Vlissingen for the American vehicles, and for those British Heavy Equipment Transporters from 104 Log Sup who would have transported tracked armour not destined for onward movement by river barge. This facility had been disassembled by the time I arrived at the port but I was at least able to photograph a few of the Scania trucks from 130 Clusterkompagnie before they left the Temporary Military Village. Hopefully these photos of PLS trucks and loads should be of interest to some of our readers.