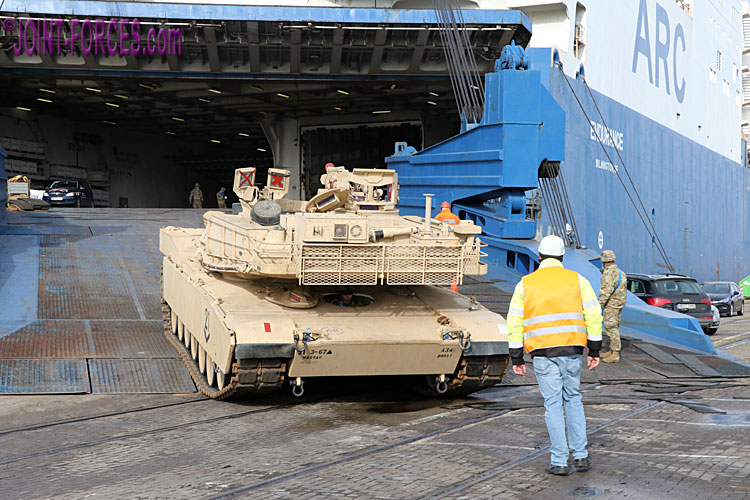 On Thursday 20th February vehicles assigned to the first US armoured formation, 2ABCT of 3ID, bound for DEFENDER-Europe 20 arrived in the Port of Bremerhaven, reports Bob Morrison.

Over the next few weeks six giant seagoing Ro-Ro (Roll-on / Roll-off) vessels will dock in Europe’s North Sea ports to deliver vehicles and equipment for many of the 20,000 US-based troops who will cross the Atlantic to participate on DEFENDER-Europe (DEF20) and several linked NATO exercises in the late spring.

The first of these vessels to arrive, carrying mostly armoured vehicles plus ISO containers for 2ABCT – 3ID (2nd Armored Brigade Combat Team of 3rd Infantry Division) for onward transportation by road and rail, was the Motor Vessel ARC Endurance. ARC (American Roll-on Roll-off Carrier) is “the leading US-flag Ro-Ro carrier operating liner services in the international trades. ARC provides port-to-port and end-to-end transport of heavy vehicles, helicopters and other equipment for the US government and its various agencies”. The company states it is “a proud participant in the US Government’s Voluntary Intermodal Sealift Program (VISA), and is committed to meeting the needs of the Department of Defense in peacetime or in time of national emergency. All ARC vessels are under contract in the Maritime Security Program (MSP)”.

ARC Endurance while moored in Bremerhaven Docks on Friday (21st) – ISO containers for 3 ABCT which had been stacked on an upper deck, partly as a sacrificial layer to help defeat anti-shipping missiles, had overnight been craned off and stacked on the dockside awaiting line-haul

A single MSP sealift ship like ARC Endurance has nine vehicle decks which allows it to preposition around 1,250 individual items – tracked and wheeled vehicles plus trailers, flatracks and ISO containers etc. – to equip an entire Armoured Brigade Combat Team of a little over 4,000 troops; most personnel will be flown across the Atlantic to link up with their vehicles at holding areas further into Germany. The armour being unloaded when we were allowed onto the dockside on Friday primarily included, in sequence above, M1A1 AIM main battle tanks from: 3rd Battalion, 67th Armor Regiment; 3rd Battalion, 15th Infantry Regiment, and 2nd Battalion, 69th Armor Regiment.

The standard Infantry Fighting Vehicle of 3ID’s 2ABCT is the M2A2 ODS / M2A3 Bradley. Many of these vehicles had already been offloaded from ARC Endurance by the time we arrived on the dockside but I did managed to snap one, above, from 2-69 rolling down the stern ramp.

The ABCT’s reconnaissance formation, 6th Squadron, 8th Cavalry Regiment, uses the M3A2 ODS version of the Bradley and these had also been offloaded onto the dockside (above). The Bremerhaven stevedores and Army drivers had worked through Thursday night to ensure a speedy turnaround of the vessel and the vehicle lanes on the dockside were filling fast.

The brigade’s armoured artillery assets, these days usually categorised as Fires in US military parlance, are provided by 1st Battalion, 9th Field Artillery Regiment who use the M109A6 Paladin 155mm self-propelled howitzer. These had also been offloaded along with their supporting M992A2 Field Artillery Ammunition Supply Vehicles or FAASV.

Combat Engineer support for the brigade is provided by 9th Brigade Engineer Battalion and on the dockside I spotted two of their M60 Armoured Vehicle Launched Bridge systems, complete with upgraded MLC85 scissors bridges which measure 19.2 metres when extended.

Other armour spotted in the lanes included M88A1 Hercules Recovery Vehicles, from 703rd Brigade Support Battalion, pictured above, and M1068 Command Vehicle variants of the M113 APC, from the Brigade Headquarters and Headquarters Company, plus an Armoured Ambulance version which shares a similar high roof layout with the M1068 and the earlier M577.

As can be seen from even this brief look at its armoured vehicle complement, the US 2nd Armoured Brigade Combat Team ABCT from Georgia-based 3rd Infantry Division is fully self-sufficient with sizeable combat support and combat service support units necessary to sustain the operations of its MBT and AIFV combat assets.

Author’s footnote: I have done my best to include two views of each of the main vehicle types to assist our military modeller viewers, but as the media facilty took place during live port operations where safety was a primary concern and there were tight restrictions on where I could go it was simply not possible to undertake a full walk-round.

Update, August 2020: We caught up again with some of this 3rd Infantry Division armour on Drawsko Pomorskie Training Area in Poland, where part of the modified DEFENDER-Europe exercise continued after a delay caused by the COVID-19 outbreak in Europe:-