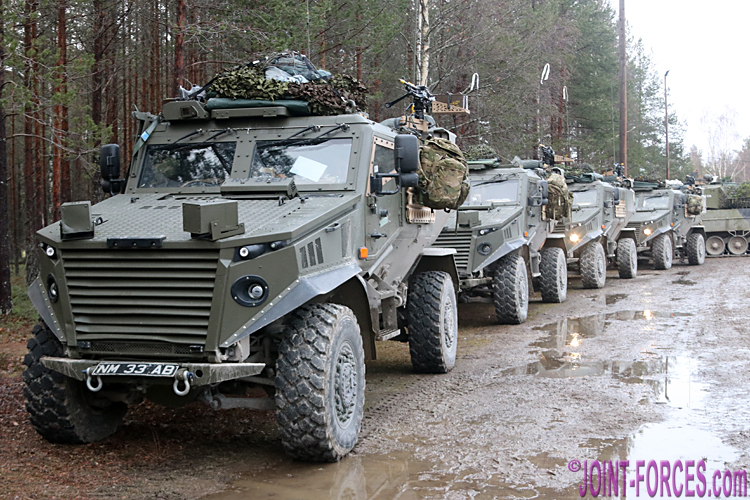 In the 1970s the British Army decided that tracked, rather than wheeled, armoured infantry vehicle were the way ahead and initiated the MCV-80 (Mechanised Combat Vehicle for the 1980s) project which resulted in the WARRIOR Infantry Fighting Vehicle being fielded to partially replace the FV430-series Armoured Fighting Vehicles; introduced in the 1960s, many of these are still in service today as the upgraded FV430 Mk3 BULLDOG. Wheeled armoured personnel carriers, usually described as Mechanised Infantry Vehicles or MIV, are faster to deploy over greater distances than tracked vehicles, and are easier to maintain but, other than the lightly armoured SAXON APC ‘battlefield taxi’ introduced in the 1980s primarily to transport Territorial Army to Germany to support the British Army of the Rhine, UK Defence Procurement has been very slow in introducing wheeled armour (but that is another story).

Initially during Operation HERRICK, the British combat involvement in Afghanistan from late 2002 through to 2014, the only protected infantry vehicles available to British Forces were the CAV-100 Land Rover Defenders, nicknamed SNATCH Land Rovers, which were small Internal Security patrol vehicles designed to protect primarily against pipe bombs and 9mm pistol rounds encountered on the streets of Northern Ireland during Operation BANNER. With nothing else in the way of wheeled armoured vehicles on the inventory in any great numbers during the first decade of the millennium, other than eventually the hastily procured and ultra-heavy, therefore not particularly manoeuvrable, MASTIFF 6×6 and RIDGBACK 4×4 family, British commanders in Afghanistan (and on Operation TELIC in Iraq) had little choice but to initially use SNATCH. However mounting fatalities in this small 4×4 eventually prompted the raising of an Urgent Operational Requirement (UOR) for a completely new and very manoeuvrable wheeled vehicle better suited to protecting troops in an asymmetric warfare environment. FOXHOUND was the result and in June 2012 the first batch was deployed to Afghanistan.

By the time that FOXHOUND entered service (click this link for the first article in a three-part series) Op TELIC was over and Op HERRICK was in drawdown so the British Army now had a capable, albeit rather small, Light Protected Patrol Vehicle or LPPV fleet available. Fortunately after Op HERRICK the FOXHOUND escaped the red pen of the MoD bean-counters, who at times appear to be ten times faster at selling off military assets than procuring badly needed new ones, and consequently it was transferred from UOR stocks to the core fleet. As this compact 4×4 can only transport four infantry, plus two crew, rather than a full infantry section of eight plus two crew, it is not ideal for mechanised infantry but at least it provides its occupants with more protection than a softskin truck.

The MAN SV, a range of 4×4, 6×6 and 8×8 high mobility cargo trucks procured for UK Forces in March 2005, can also be used in the Troop Transport role if ROPS (Roll-Over Protection System) Enhanced Seating Kit modules are fitted on the load bed. On TRJE18 Anzio Company primarily travelled in Support Vehicle Cargo Light (SVCL) 6 Tonne 4×4 Euro 4 MAN trucks, on a scale of two vehicles per platoon with 14-seat modules in the back of each. These trucks were, of course, unarmoured and would have been next to useless if this had been an operational deployment rather than just a training exercise, plus they offered occupants in the rear scant protection from the extreme cold, but until the proposed UK MIV (probably BOXER) eventually enters operational service around 2012, around 27 years after the project commenced, they will be the only wheeled transport other than the FOXHOUND available for light role infantry.

Other examples from the MAN SV range, including cargo trucks with appliqué armour cabs and 6×6 Unit Support Tankers on the Improved Medium Mobility SX-series rather than the HX-series chassis, were used to support the two UK infantry companies in the field. As the MAN SV story deserves its own mini-series we will not go any further into this topic at the moment but Carl will bring us up to speed with a series of articles on the German-built workhorses in the not too distant future.

Incidentally, UK MoD photographers documented the epic British Army road move from home bases in England – via The Netherlands, Germany, Denmark and Sweden – to the TRJE18 staging base in Norway, but under current MoD image licence terms these photos can no longer be used as they were only made available for the specific “reporting of current news”. In our opinion this restriction on image use is a waste.

Above: In addition to having good off-road capability the FOXHOUND Protected Mobility Vehicle, seen here in Norway, is very manoeuvrable and can rapidly cover long distances on-road [©BM]

In Part 14 (we try not to do 13) of this series it is my intention to look at the Swedish-led battle group acting as North (Red) Forces on the most easterly of the three north-south axes.