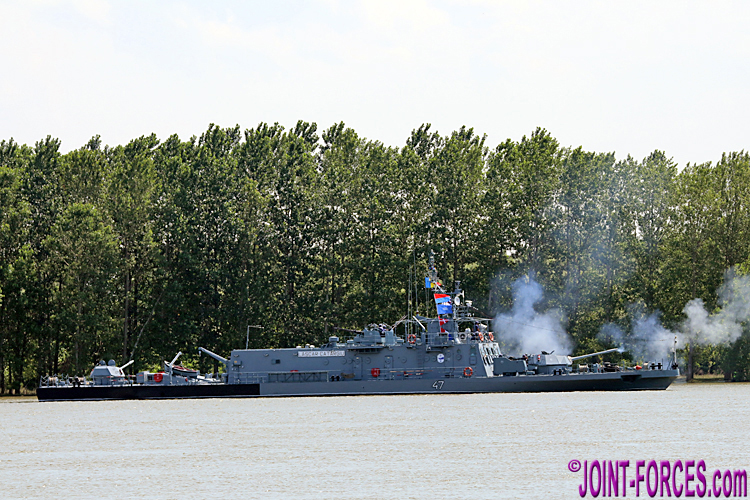 In a recent Kit & Camo feature on Romanian Navy uniform camouflage I promised to take a brief look at the River Danube Monitors of the Romanian River Flotilla, writes Bob Morrison.

Monitors, riverine gunboats, have fascinated me since boyhood when I first saw the old Lindberg Line plastic construction kits of the USS Monitor and CSS Virginia (previously USS Merrimack) from the American Civil War displayed in the window of the legendary Clyde Model Dockyard in Glasgow’s Argyll Arcade.

Although this type of shallow draft gunboat was reasonably widely used from the mid-19th to mid-20th centuries, including by the Royal Navy until just after WWII, and slightly later the United States converted Landing Craft to operate in the Monitor role during the Vietnam War, comparatively few Monitors are operated today. It was therefore a pleasant surprise when I discovered that the Romanian Navy (Forțele Navale Române) not only has a large River Flotilla of such vessels in operation on the lower Danube but a number of them were participants in the river assault and wide gap crossing phase of Exercise SABER GUARDIAN 2019 in June. Not only did I have the chance to photograph one of the three 52-metre Mihail Kogălniceanu-class and two of the five slightly smaller Rahova-class gunboats, plus one of the cannon-armed 32-metre River Patrol Boats, but I was also able to see them firing their main armament (blanks) in support of 307 Marine Infantry Regiment.

The five smaller Armoured Vedettes, also assigned to the Romanian River Flotilla’s Divizionul 67, are the Rahova, Opanez, Smardan, Posada and Rovine. Displacing 322 tonnes and with a draft of only 1.3 metres, this class of vessel measures 44.5 metres long with a beam of 8 metres. Armament consists of: one 100mm gun, in a turret ahead of the superstructure; one twin-barrel M1980 30mm air defence automatic cannon turret, positioned centrally towards the stern; two dual-role (air defence or ground support) ZPU-4 quadruple barrel 14.5mm heavy machine gun turrets, amidships either side of the superstructure and also capable of forward firing in support of marine infantry; two TAB-77 turrets, each with a 14.7mm heavy machine gun and coaxial 7.62mm machine gun, flanking the main gun turret; and two forward-facing 40-tube multiple rocket launchers (again probably the 122mm LAROM). Powered by three 1200hp engines, the top speed is a fraction less than that achieved by the Monitors, range is 500km and the ships can operate unsupported for three days. Full complement is 47 sailors.

According to the Romanian Ministry of Defence, the missions of Divizionul 67 and its eight Monitors and Vedettes include:-

The River Patrol Boats, which are assigned to Divizionul 88 Vedete Fluviale (88 River Vedette Division) ‘Amiral Gheorghe Sandu’ are the smallest of the armed vessels deployed on the Danube and as they do not have large calibre tank-type guns they are technically not monitors but they still pack a punch. Though primarily intended to provide air defence of key points or in support of river assaults by Marine Infantry, these vessels can also be used in the ground support role. Displacing 95 tonnes with a very shallow draft of just 900mm, these aluminium hulled ships are 32 metres long with a beam of 4.5 metres. Armament consists of: one twin-barrel M1980 30mm air defence automatic cannon forward and one ZPU-4 quadruple barrel 14.5mm heavy machine gun turret behind the superstructure. Two 450hp engines give a top speed of 25km/hr (13.5 knots) and range is given as 820km. Full complement is 17 sailors.

The missions of Divizionul 88 are almost identical to those of Divizionul 67, but as these patrol boats have minimal draft they are ideally suited to the lower stretches of the Danube, Europe’s second longest river after the Volga in Russia, and the shallow waterways of its delta on the Black Sea. They are also used in support of the combat divers from Romanian Naval Special Operations Forces (Forţe Navale pentru Operaţii Speciale ) Unit 164 and it is one of their teams who are seen alongside Lt Cdr Nicolae FILIP (150).

Notes: The literal translation of Vedete is Star but I have substituted Vedette, which is the English term for a naval launch used for scouting and surveillance, as that seems more appropriate. As the river assault during SABER GUARDIAN 19 was moving upstream, with the exception of a single image taken the previous day at the end of a rehearsal, it was not possible to photograph the port sides of the ships – sorry. At this point the Danube, which was in full flow following heavy rains over western Europe, is well over 500 metres wide so vessels were as much as 400 metres distant from the camera position sailing in the deep channel.