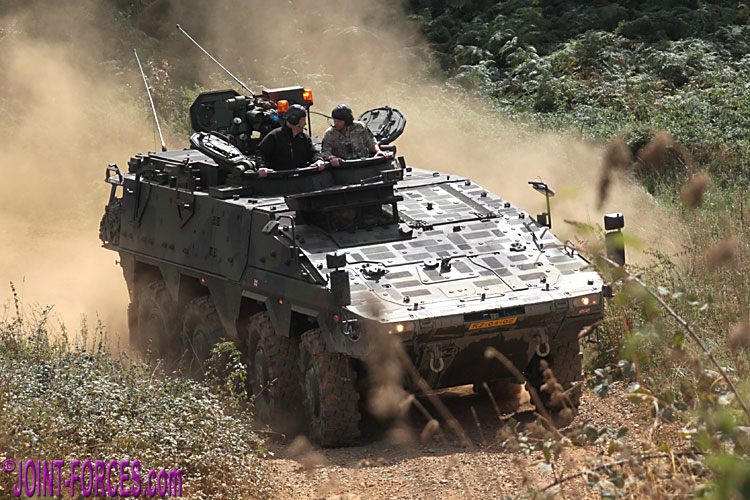 Over the Easter weekend, on Saturday 31st March to be specific, former UK Minister for Defence Procurement Guto Bebb formally announced that the British Army had rejoined the BOXER programme and would explore options to equip the Army with the 8×8 troop carriers to “modernise its vehicle fleet and meet the Army’s Mechanised Infantry Vehicle (MIV) requirement”. See MIV ~ UK Rejoins Boxer Programme for more.

Speaking at DVD 2018 on Wednesday the current Minister for Defence Procurement, Stuart Andrew, said: “A new 8×8 armoured vehicle is a key part of our British Army’s future, and today marks a big step towards equipping our soldiers with this brand-new troop carrier.

“British companies are stepping up to the plate yet again for a project which could support up to 1,000 jobs across the country, and it is great to give industry the green light to now pull together a full plan of action. I am looking forward to pressing ahead with negotiations in our pursuit of a vehicle which works best for the Army, the taxpayer and British industry.”

Although industry may have received a verbal green light from UK MoD, actual orders for the new MIV have not yet been placed and these will more than likely be Christmas presents for 2019 rather than 2018. If contracts are awarded by the end of 2019, what we would consider to be a true green light, Rheinmetall UK is confident that the first British Army unit should be fully operational with BOXER by the end of 2022, or very early in 2023, which they believe is “absolutely in line with Strike Brigade requirements”.

On Wednesday JOINT-FORCES.com asked a Rheinmetall UK spokesperson for a quick update on how, from the company’s perspective, BOXER was progressing. He told us: “MIV BOXER is on track with the MoD programme. At the moment we are expecting the formal Request For Proposal, having had a Draft Request For Proposal for the last few months and which we have been working through with the MoD through our partner ARTEC.

For more features and news articles on BOXER click this link or type BOXER into the Search Box. The UK MIV requirement is for a fast, long range armoured personnel carrier to equip the new Strike Brigades [© BM]