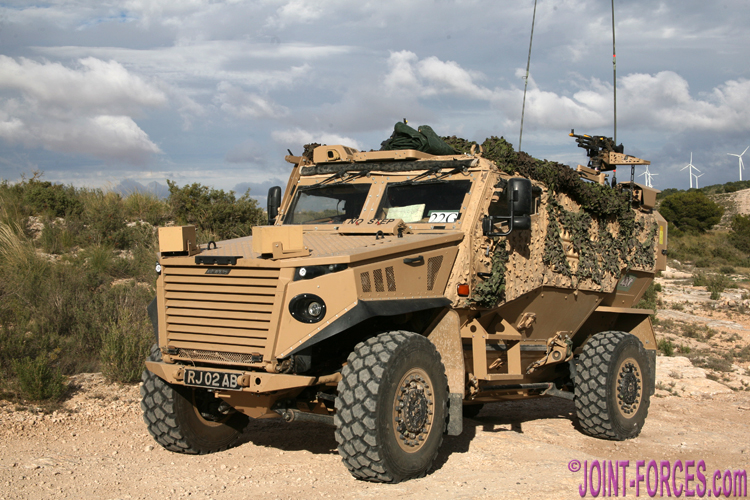 The FOXHOUND LPPV, produced in 2012 as an Urgent Operational Requirement for the British Army by Force Protection Europe, is currently in use on Operation TORAL, writes Bob Morrison.

In the thirty or so years prior to 2012 the British Army mostly had to rely on tracked armoured vehicles, the lightly armoured Saxon ‘battlefield taxi’ personnel carrier excepted, for undertaking mechanised infantry patrol duties as, unlike many of its NATO allies, the UK MoD had not adopted a dual approach and procured wheeled armoured vehicles as well. As a result of this short-sightedness, the only light armoured high mobility vehicle on the inventory in any numbers in the early years of Operations TELIC (Iraq) and HERRICK (Afghanistan) was the very lightly protected Land Rover CAV-100 Internal Security Vehicle, nicknamed ‘Snatch’ as its initial role in Ulster was primarily to snatch ringleaders during urban disorder.

The Snatch Land Rover, even though it actually saved a great many lives in ambushes, was much criticised in the mainstream media due to the number of soldiers’ lost in Iraq, and later Afghanistan, as a result of the escalating number and frequency of Improvised Explosive Device (IED) attacks. In response a number of expensive Urgent Operational Requirements were instigated as public servants in the Treasury and in Defence Procurement, as well as the Blair Government, belatedly attempted to cover their backsides.

The major problem UK MoD faced in the second half of the first decade of the new millennium was that the only off-the-shelf solutions available at the time which offered the level of protection required against IEDs were both too heavy for the terrain in Afghanistan’s Helmand Valley (drawdown in Southern Iraq was impending) and insufficiently compact and manoeuvrable for operating in and through its medieval-like villages of walled compounds.

A quantity of the 4×4 RIDGBACK variant of the 6×6 MASTIFF was procured from US manufacturer Force Protection Inc. in 2008 under the UOR process to provide a temporary solution but, although shorter, narrower and lighter than the 6×6 the 4×4 was still too large and too heavy for many infantry patrol tasks in Helmand. Industry was therefore invited to suggest ‘clean sheet’ solutions and in 2009 two proposed new designs which showed potential emerged.

The first FOXHOUND LPPVs were flown out to Camp Bastion in Helmand in the hold of a C17 transport aircraft on 2nd June 2012 [Crown Copyright/OGL: Sgt Andy Reddy]

Force Protection Europe, a British-based subsidiary of the producer of MASTIFF and RIDGBACK, teamed up with Ricardo Special Vehicles, the engineers responsible for the evolution of the Land Rover Defender WMIK conversions in the late 1990s, to offer their OCELOT concept. Supacat (now SC Group) who manufactured the in-service JACKAL 4×4 and COYOTE 6×6 vehicles offered their SPV 400 concept in conjunction with NP Aerospace, who had developed the Land Rover CAV 100 for Ulster in the early 1990s.

FOXHOUND LPPV at Patrol Base Wahid in Helmand, October 2012 – shortly after this drawdown of British troops from Southern Afghanistan was announced [Crown Copyright/OGL: Cpl Mike O’Neill]

In April 2010 orders to produce a pair of prototypes for full evaluation were placed with each manufacturer and within a few weeks invitations to tender for a production contract were sent out to both. Such was the urgency to procure a new Light Protection Patrol Vehicle or LPPV  – 2009 and 2010 were the peak years for fatalities and serious injuries on Op HERRICK in Afghanistan – that by September the MoD had opted for OCELOT and in November they placed an initial contract for 200 vehicles with Force Protection Europe and named it FOXHOUND.

Christened FOXHOUND by the MoD, to maintain the theme of naming vehicles after dog breeds, the OCELOT design was tweaked before being declared ready for bulk manufacture and the first examples equipped to Theatre Entry Standard (TES) would not arrive at Camp Bastion in Afghanistan until June 2012. Although by modern standards two years is a comparatively short time to take a military vehicle from rough prototype to operational deployment, by the time FOXHOUND arrived in-theatre British drawdown from Helmand Province was already on the cards and by the end of the year a full withdrawal and the termination of Operation HERRICK had been announced.

Update: FOXHOUND LPPV has now been re-designated as PMV or Protected Mobility Vehicle.