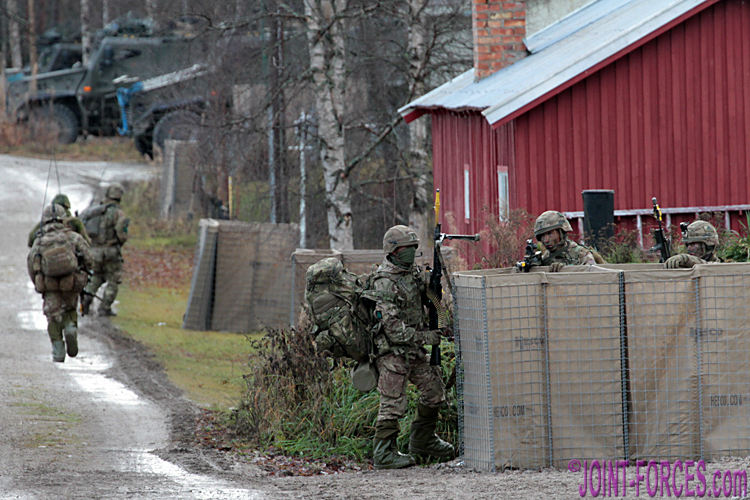 1 R IRISH moving into prepared positions in the hamlet of Elvål, north of Bergset [©BM]

The 4 Multi-National Brigade battle group component of South (Blue) Force, tasked with blocking the southward advancing North (Red) Force central brigade before they reached the key town of Bergset on the Telneset to Åkre axis, was UK-led and comprised of three infantry companies, two British forward with one Polish in reserve, plus Danish and Polish main battle tanks in support.

On 2nd November [2018] the local, Nord-Østerdal region, Norwegian Home Guard (HV) had formed a defensive line on the northern edge of the hamlet of Elvål, roughly five kilometres north of Bergset, at a key point where the Fv30 road crosses the River Tysla. Around 100 metres downstream from the bridge, which sappers had notionally dropped but which the Red Forces had the ability to replace using armoured bridgelayers if not halted by the Danish and Polish main battle tanks, there was also an ancient ford that the Home Guard were defending.

As TRIDENT JUNCTURE 18 (TRJE 18) was conducted on public land, primarily using forest plantations and farmers’ fields, instead of digging in and damaging fertile land the infantry occupied above ground trench-like positions formed from HESCO bastions filled with sand and aggregate and, where appropriate, crudely camouflaged on the enemy side with fresh foliage. The focus of the Home Guard defence when J-F arrived in Elvål on the morning of the 3rd, having approached from the north using our media accreditation ‘cloak of invisibility’ to pass through the advancing Red Forces, was the old ford and the village centre. Anzio Company of 1 LANCS (1st Battalion, Duke of Lancaster’s Regiment) had now taken up the forward defensive positions west of the bridge and a second 4 MNB infantry company, from 1 R IRISH (1st Battalion, Royal Irish Regiment), now occupied the positions to the east.

A Light Role infantry battalion transported primarily in MAN SV trucks Anzio Company of 1 LANCS was assigned to 4th Infantry Brigade at the time of TRJE18 but 1 R IRISH, a light protected mobility infantry battalion with FOXHOUND Light Protected Patrol Vehicles, was borrowed from 7th Infantry Brigade. Both battalions are part of the Adaptable Force and are components of 1st UK Division, which is intended primarily for domestic duties, overseas commitments and stabilisation operations. For the exercise in Norway the bulk of their vehicles were driven there by road, though a small number were also transported by rail through the Channel Tunnel to again prove a transportation system which fell into disuse when operational focus was more on Afghanistan and Iraq.

The six multinational Land Forces brigade-level battle groups taking part in the manoeuvres in Norway, which also incorporated two opposing Amphibious Task Forces, were selected and paired to allow NATO and Partner Nations to exercise light role rapid response, mechanised and armoured formations in as realistic an environment as possible to try to ensure all players (both at higher command level and out on the ground) could derive maximum benefit from the training. In the first few days of the live phase of TRJE18 the British-led 4 MNB exercised the concept of fast deployment of lightly equipped infantry to bolster the defences of a NATO ally under threat from advancing conventional (Red) forces, and in the second phase the Blue forces counter-attacked to allow the Norwegian mechanised infantry battle group facing them to go on the defence against fast-moving light role infantry with a heliborne capability; to enable the latter, 1 LANCS swapped their trucks for Slovenian Cougar and US Chinook helicopters.

In the next part of this series we plan to look at the primary wheeled transport used by 1 LANCS and1 R IRISH.