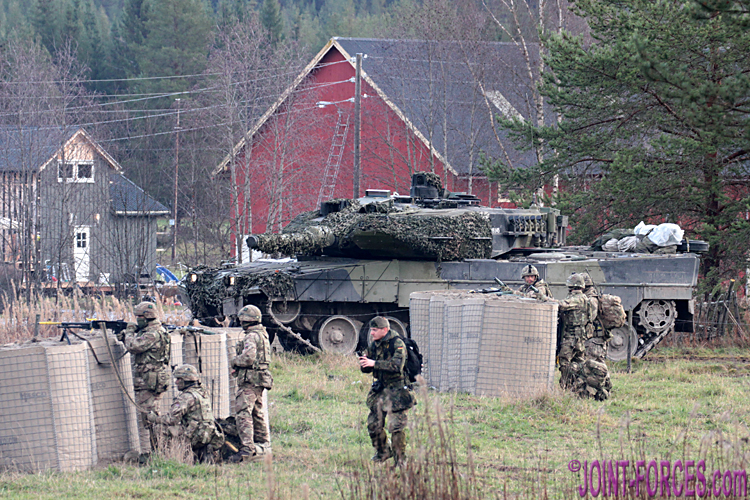 The primary British infantry components of the 4 Multi-National Brigade (4 MNB) Battle Group of South (Blue) Force, which was tasked with blocking the advancing North Force before it reached the key town of Bergset in the Rendalen Valley, were Light Role and Light Mechanised companies without their own supporting armour but attached Danish and Polish formations operated in this role.

As we will see in a later article, the Norwegian Home Guard was mobilised to form the initial defensive line north of Bergset and the two British infantry companies, transported in FOXHOUND LPPVs and MAN SV trucks, was sent forward to bolster them. Using troop trucks, or transport helicopters when available, and light protected patrol vehicles allows Higher Command to rapidly move forward light scales infantry faster and/or over greater distances than track-borne mechanised infantry but this increased mobility usually comes as a trade-off against armoured protection.

With the British manning trenches alongside their Norwegian volunteer colleagues and Red Forces bearing down, a squadron of Danish main battle tanks was brought forward and behind them Polish mechanised infantry, complete with their own tanks, lined up to launch a counter-attack after the Blue Force had given their opponents a tactical bloody nose.

The Danish tanks which stopped the advancing Red Force (i.e. Norwegian) armour were provided by 1st Tank Squadron (1. Kampvogns Eskadron) of 1st Panzer Battalion (1. Panser Bataljonen) of the Jutland Dragoon Regiment (Jydske Dragonregiment ) or I/JDR. The main battle tanks used by I/JDR during TRJE 18 were Leopard 2A5DK variants and during the crucial Battle For Elvål these came face to face with Norwegian Leopard 2A4NO tanks, which they successfully stopped.

Poland also operates the Leopard 2, in both A4 and A5 configurations, but for TRJE18 they deployed T-72M1Z main battle tanks from 1st Tank Battalion (1 Batalion Czołgów) of the 21st Podhale Rifles Brigade (21 Brygady Strzelców Podhalańskich) along with a company of Mechanised Infantry from 1st Podhale Rifles Battalion (1 Batalion Strzelców Podhalańskich) of the same brigade, which is Poland’s specialist mountain warfare formation, who travelled in BMP-1 Infantry Fighting Vehicles. Incidentally our Senior Correspondent Carl Schulze, who is our tank specialist, spotted that the Polish T-72s were actually running on rubber block tracks more usually found on the Polish-made PT-91 Twardy derivative of the earlier Soviet tank rather than the original all-steel tracks.

All images on this page were taken as the Danish Leopards probed forward to engage the Norwegian tanks and as the Polish reinforcements moved forward for a Passage Of Lines and subsequent counter-attack. In Part 11 of this mini-series I plan to focus on the British troops manning the trenches north of Bergset.