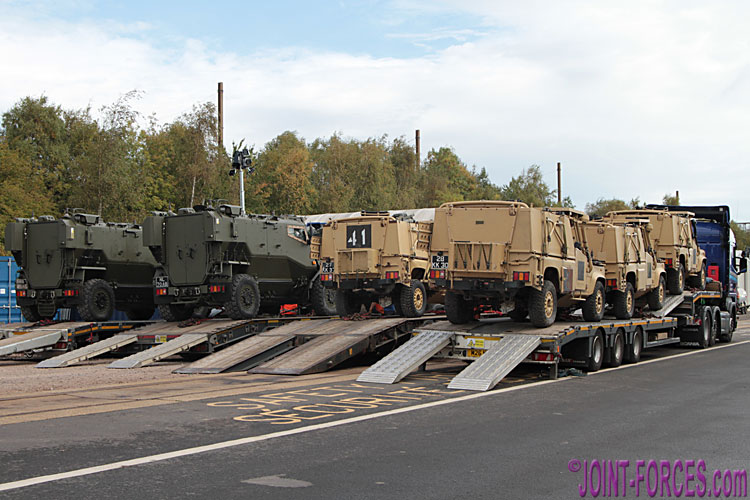 In a few days time troops from the 1 R IRISH (1st Battalion, the Royal Irish Regiment) Battle Group, part of 4 [UK] Infantry Brigade from 1st [UK] Division, operating in the Light Role as part of the British Army’s Adaptable Force, will commence a 2,500km road convoy march from their bases in England to Norway to participate in Exercise TRIDENT JUNCTURE 2018 or TRJE18. To validate rail transportation and logistics procedures the opportunity has been seized to transport a package of 30 of their vehicles, including FOXHOUND and R-WMIK+, by rail through the Channel Tunnel and then northwards across Europe to the 1 GNC (1st German/Netherlands Corps) logistic base established in eastern southern Norway.

We intend covering TRIDENT JUNCTURE 18, a triennial NATO high visibility defensive exercise, in some depth over the next month or so and therefore in this very brief article we will look solely at the railhead operation on Tuesday rather than concentrating on the ‘big picture’ for the moment. The accompanying images were taken over the course of four hours and the entire loading operation was controlled at the railhead by a single RLC (Royal Logistic Corps) Sergeant, supported by a couple of NCOs, with the vehicles being driven onto the flatcars by their own crews.

When the British Army of the Rhine was at its height during the Cold War it was common practice to move train-loads of armour around for exercises and the Army even had its own railway operation complete with a training school and tracks back in Hampshire. The so-called Peace Dividend following the fall of the Iron Curtain on the cusp of the 1990s and the resultant gradual drawdown of British Forces Germany slowly killed off 79 Railway Squadron RLC, which was finally disbanded in 2012 despite having done sterling work opening up the Baghdad-Basrah rail line in 2003 during Operation TELIC.

When Operation HERRICK in Afghanistan drew to a close and conventional operations again came into focus, especially following Russian expansionism in Ukraine, once again planners started looking towards rail transportation. Subsequently, during Ex. TRACTABLE 15 both tracked and wheeled armour was moved by train from Yorkshire to Salisbury Plain to validate the new Adaptable Force logistics procedures and earlier this year a package of vehicles was moved by rail during Exercise WESSEX STORM.

First of 20 FOXHOUNDs being backed off its low loader [© BM]

Normally when armour has to be moved abroad for exercises, for example such as for Exercise SAIF SAREEA III currently building up in Oman, it is transported by road to a port and then usually shipped out to the destination country aboard one of the Royal Fleet Auxiliary vessels, where it is then moved forward to the exercise area by road. Occasionally, such as for the recent Ex. QUICK RESPONSE 18 in Bosnia, light armoured vehicles will be transported by air on charted heavy transport aircraft, and even more rarely armour will be flown in the RAF C-17 fleet in support of active operations, but such air movements are very costly when compared to simply loading a train or two and then sending a whole vehicle fleet by rail.

Once vehicles are at the railhead (in peacetime armour is most likely to be brought in on contracted low loaders) it is a relatively fast and simple task to load them onto the train as long as this is pre-planned and everyone involved knows precisely what they are doing. On Tuesday the loading was scheduled to commence at 13:00 hours, with civilian low loaders arriving at the location in packets of three at regular intervals from 10:00 onwards and the military vehicles’ drivers then speedily unloading them and moving them into a holding area.

At 12:59 the RLC Sergeant in charge signalled the first FOXHOUND Light Protected Patrol Vehicle to proceed to the edge of the loading ramp and the operation to position the initial fourteen vehicles and two trailers on the first of two trains commenced. With each vehicle’s commander out on foot at the front guiding his driver from flatcar to flatcar, the train was carefully loaded with troops then placing wheel chocks and tying down strops under the guidance of experienced railway staff.

First FOXHOUND rolls onto the train – bang on time [© BM]

By 14:30 the first trainload was completed, with all vehicles secured, and railway staff were brake testing the train prior to moving it and replacing it with a second train. The last 16 vehicles, all FOXHOUND LPPVs, were by now lined up waiting to be loaded well ahead of schedule; it was expected that as all remaining vehicles were of the same type the second load would be even faster. A Land Rover is carefully moved from flatbed to flatbed [© BM] Last of the first four FOXHOUNDs with HUSKY behind [© BM] HUSKY was the tallest vehicle in the packet being transported [© BM] The four-wheel steering on FOXHOUND makes it very manoeuvrable [© BM]