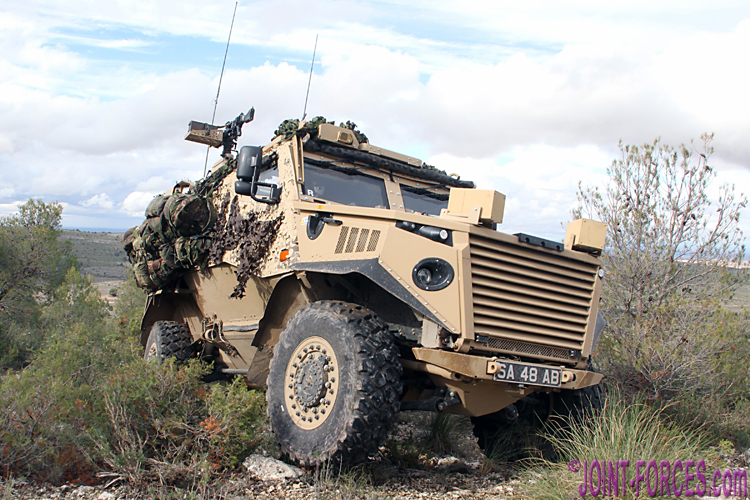 The FOXHOUND LPPV, produced in 2012 as an Urgent Operational Requirement for the British Army by Force Protection Europe, is now part of the Core Fleet, writes Bob Morrison.

FOXHOUND LPPV (Light Protected Patrol Vehicle) is now fully integrated into the Core Fleet available to the British Army, and RAF Regiment, for use by the six Infantry battalions assigned to the Light Protected Mobility role plus the two RAF Regiment squadrons (No. 1 and No.34) operating in the Light Armour role for airfield defence. At time of writing the 1st Battalion of the Royal Irish Regiment (1 R IRISH) has deployed a large number to Norway on Exercise TRIDENT JUNCTURE 2018, some by road and some by rail, and No. 1 Squadron of the RAF Regiment has deployed with more of these compact vehicles in the Airfield Protection role at Thumrait in Oman on Exercise SAIF SAREEA 3, plus operationally both the British Army and RAF Regiment are also using the vehicle in Afghanistan on Op TORAL.

Originally co-developed by Force Protection Europe or FPE, now part of General Dynamics Land Systems or GDLS, and Ricardo plc to meet a specific UK MoD UOR (Urgent Operational Requirement) for a highly mobile lightweight but blast and ballistic protected 4×4 vehicle to replace the over-matched ‘Snatch’ Land Rover Defender and the poorly performing Pinzgauer VECTOR, the FOXHOUND was a clean sheet design. Configured to take six troops – driver, commander and four dismounts – travelling in a protected pod, the LPPV needed to have a gross vehicle weight of no more that 7500kg (i.e. roughly twice the weight of Snatch) but the ability to transport a 2,000kg payload.

Required primarily for patrol duties in Afghanistan’s Helmand Province, where away from the main population centres and the national highway through the province good roads and bridges were almost non-existent, the proposed vehicle needed to have good off-road ability yet also had to be very manoeuvrable to travel through villages and hamlets where the narrow roads between compounds had evolved for horse and cart rather than heavy trucks. Additionally, what eventually evolved as FOXHOUND had to be more capable of protecting the occupants from bullets and bombs, particularly relatively crude yet powerful Improvised Explosive Devices or IEDs, to almost the same level as much heavier 6×6 or 8×8 conventional armoured vehicles.

Production batch FOXHOUND at its formal unveiling at DVD 2012 [© BM]

The solution to the protection problem was to locate all six personnel in a survival pod, constructed of a glass reinforced plastic composite, sitting inside the wheelbase and atop a protected ‘skateboard’ containing the power train; appliqué packages to cope with Explosively Formed Penetrator and Rocket Propelled Grenade threats can also be affixed. In theory, a landmine blast under any FOXHOUND wheel station might blow off that particular, and deliberately sacrificial, wheel but the V-shaped hull design should deflect the blast outwards and away from the occupants; troops sit on blast-attenuated seats inside the pod to reduce impact from the explosion and most personal kit is carried at the rear of the troop compartment to give more space in the protected pod area.

Opposite sides of production batch vehicle NL14AB at DVD 2012 [© BM]

For easy maintenance of the power train the crew survival pod can be hinged up and over to one side and pods are comparatively easily interchangeable at unit level; both open-topped recce & fire support and two-man cab logistic truck pods have been developed but neither has yet entered UK service. For a while it was presumed that up-armoured FOXHOUND variants might fill roles in the British Army’s MRV-P ( Multi-Role Vehicle-Protected) requirement but recent preliminary selection of the Oshkosh JLTV appears to have ruled this out.

The solution to the mobility requirement for Helmand Province was met by giving FOXHOUND selectable four-wheel steer, meaning its turning circle is less than 12 metres, and wheel travel was maximised by using torsion bar suspension rather than beam axles. A six cylinder, 3.2-litre Steyr diesel engine and six-speed ZF automatic gearbox gives a top road speed of around 110km/hr or 68mph.

For self-protection, FOXHOUND is fitted with two 7.62mm GPMG (General Purpose Machine Gun) mounts alongside the top cover roof hatches. The OCELOT marketed by GDLS has the option for a Remote Weapon Station instead, but this has not been taken up by UK MoD.