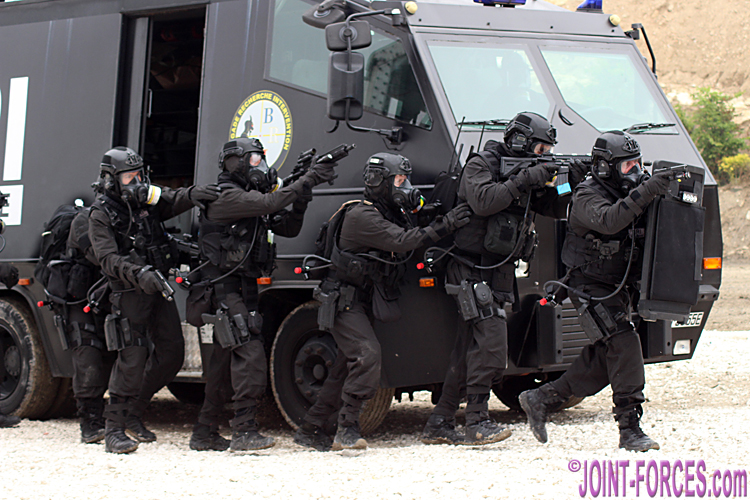 On a grey, muggy Parisian afternoon in June a gunman entered an office and took two occupants hostage… GSO and BRI were quickly on the scene to bring the tense situation to a swift conclusion with no loss of life, writes Bob Morrison.

Just 30 hours before this tense incident unfolded in Paris, JOINT-FORCES witnessed a combined team from the French National Police GSO (Groupe de Soutien Opérationnel or Operational Support Group) and BRI (Brigade de Recherche et d’Intervention or Investigation and Intervention Brigade) working alongside BSPP (Brigade des Sapeurs-Pompiers de Paris or Paris Fire-fighter Brigade) to conduct a counter-terrorist take-down close to Paris CDG airport. This was, of course, just a combined training exercise and dynamic display at the Villepinte expo park but it gave us a chance to see these elite units in action up close (though had I known in advance just how close that BRI-BAC DAGGER would slew to a halt I would have picked a different camera angle).

To set the scene: The BSPP, which is a French Army Engineer formation tasked with providing fire and rescue cover for the Paris region, was called forward to deal with an incident involving a now stationary public transport ‘bendy’ bus with multiple civilian casualties nearby. On arriving at the scene they encountered several armed terrorists holding a number of bus occupants hostage so they withdrew to a safe distance and awaited arrival of the National Police, who deployed a regional GSO team which had been on standby.

As the BSPP set up a clearing station (display area space limitations meant it was closer than would normally be desirable) to triage casualties the armed GSO officers, working in squads, moved forward behind armoured shields to extract the civilians furthest from the bus. As pairs of officers removed individual casualties, other pairs shielded their colleagues and covered them with pistols and assault rifles… then, as a GSO team approached the bus to try to recover two further casualties just behind it one of the terrorists stepped out momentarily brandishing a pair of cylinders seemingly containing toxic chemicals!

At this point BRI were deployed and officers donned full CBRN protective equipment, including respirators with individual bottled air supplies, in the back of their armoured crew bus. Built by the military vehicle wing of Renault, now part of ARQUUS, this boxy vehicle not only functions as transport and a mobile command post but also holds a team’s arms and specialist equipment.

BRI was originally formed in 1962 as a Prefecture of Police counter to organised crime, focusing more on surveillance of and intelligence-gathering on criminals than on post-crime investigation, but immediately following the Munich Olympic Games hostage crisis the Brigade Anti-Commando (BAC) was formed around a core of BRI officers. Today there are large autonomous BRI units in Paris and Marseilles, plus smaller regional units dotted around France, but BRI-BAC is the capital’s primary police counter-terrorism force on permanent standby to respond to major incidents.

While the GSO team had been recovering casualties some of their colleagues had deployed to high ground to observe and provide perimeter security but when the chemical agent was spotted they were speedily relieved in place by officers wearing light blue CBRN (Chemical, Biological, Radiation & Nuclear) protective suits and masks. Technicians from the Prefecture of Police Central Laboratory (LCPP) were also called forward to set up a mobile lab near the incident scene in what was rapidly evolving into a multi-agency response.

The first task for BRI-BAC was to recover the two remaining casualties closest to the bus, which they did by using one of incapacitated the DAGGER PVP light armoured vehicles as a moving shield and improvised ambulance. With this task successfully completed and the casualties handed over to the BSPP clearing station, the team prepared to back up the main assault force which had approached the bus from the terrorists’ blind side (the rear). Overhead a UAV (Unmanned Aerial Vehicle) provided the command team with a live video feed bird’s-eye view of the scene and a UGV (Unarmed Ground Vehicle) provided a worm’s-eye view.

Incident scene viewed from another angle at a later display [© BM]

When the action started, initiated by a stun grenade as BRI-BAC teams went in from different directions, it was all over in seconds. The terrorist with the chemical device and his accomplices had gone off to meet their maker or, possibly more likely, headed in the opposite direction and the hostages had been released and bundled clear of the scene, allowing the specialists to go aboard the bus to check for contaminants and clear up.

In a future feature we will look at another Homeland Security capability display at Eurosatory 2018, this time undertaken by the elite GIGN.