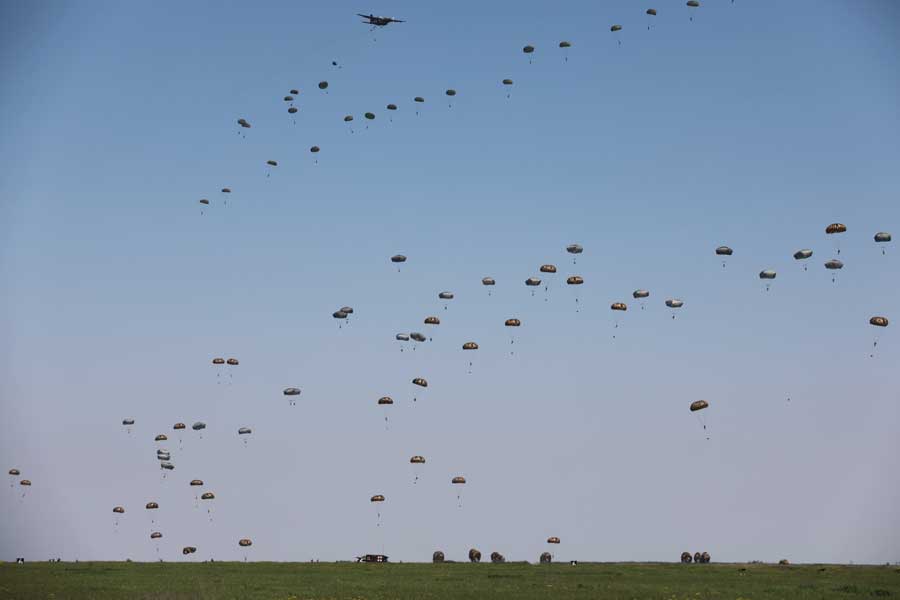 Although we were invited by USAREURAF (US Army Europe and Africa) to cover the Joint Forcible Entry (JFE) operation in Romania on Monday 10th May, current travel restrictions and a scarcity of flights at the moment prevented us travelling down from Nurmsi Drop Zone after the SWIFT RESPONSE 21 ~ Air Assault In Estonia on the evening of Saturday 8th. This was a real pity, as the Romanian JFE was a daylight jump in perfect weather rather than a night jump as in Estonia, but on the positive side remaining in the Baltics allowed us to cover the SWIFT RESPONSE 21 ~ Red Devils Live-Fire at Tapa on Tuesday 11th. However US Army photographers were on the ground in Romania and Specialist Jabari Clyburn penned the following News Story from Boboc:-

“Conducting military movements across European borders is key to the readiness of our NATO allies and partners,” said Maj. Gen. Joe Jarrard, Deputy Commanding General, US Army Europe and Africa. “SWIFT RESPONSE is a multinational exercise that stresses systems and proceedings between partners and allies to test multi-domain capabilities.

“The objectives of this exercise integrate Army airborne and land operations with joint air support and Special Operations against an opposing enemy force.”

SWIFT RESPONSE 21 took place in Romania, Estonia and Bulgaria encompassing over 7,000 paratroopers from ten different nations. The near-simultaneous Joint Forcible Entry operation ended in Romania on a sunny cloudless day. The clear blue sky was decorated with parachutes and aircraft from five different partner and allied countries. The synchronised effort was an apparent display of NATO’s interoperable capabilities.

“We need to talk to each other,” said Brig. Gen. Grzegorz Grodzki, Brigade Commander, Polish 6th Airborne Brigade. We need to communicate and understand each other. That’s the easiest way to understand interoperability. Exercises like SWIFT RESPONSE will raise our capabilities and readiness. It’s a great opportunity to become stronger.”

With such a large-scale event involving paratroopers from several different countries, the US doubled-down on its commitment to mitigate COVID-19 risk in the European theatre while continuing collective training. “The health, safety, and readiness of our Soldiers, Sailors, Airmen, allies, partners and host nations is a top priority,” said Jarrard. “We will follow all host nation requirements when entering, leaving and exercising within their countries to limit the spread and exposure to COVID-19.”

“It’s critical that we keep training,” said Col. Gil Ferguson, Deputy Commander, 82nd Airborne Division. “If we don’t train, we can’t perform. You can see several COVID-19 mitigation protocols that are in place here. Further, as the 82nd Airborne Division, we didn’t bring anyone to Europe that wasn’t double vaccinated.”

SWIFT RESPONSE is the first of a series of exercises associated with DEFENDER-Europe 21. DEFENDER-Europe 21 is a large-scale US Army-led exercise designed to build readiness and interoperability between the US, NATO allies and partner militaries. This year, more than 28,000 multinational forces from 26 nations will conduct near-simultaneous operations across more than 30 training areas in more than a dozen countries from the Baltics to the strategically important Balkans and Black Sea Region.

“This year, the focus of DEFENDER-Europe 21 will focus on building operational readiness and interoperability with NATO and a greater number of allies and partners over a wider area of operations,” said Jarrard. “This is a very important part of DEFENDER-Europe 21, and is one of the several linked, integrated and associated joint and multinational exercises that focuses on specific areas of operation each year in support of the US National Defense Strategy and NATO deterrence objectives.”