Home > Exercise News > KEVADTORM 21 ~ Into Action With The Eesti Scouts

KEVADTORM 21 ~ Into Action With The Eesti Scouts 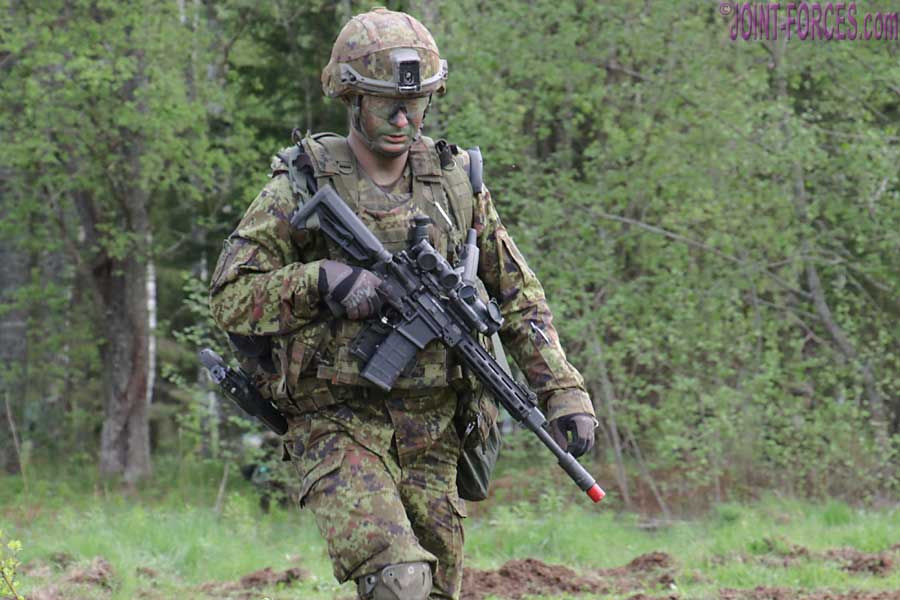 The Scoutspataljon, known as the Eesti Scouts, is the professional hub of Estonia's 1st Infantry Brigade - rifle is the new R20 RAHE [© Bob Morrison]

Following a week of unit level training and interoperability practise, the two brigade-level forces ~ Blue for 1st [EST] Infantry Brigade and Yellow for 2nd [EST] Infantry Brigade ~ clashed head-to-head on the forested Central Training Area near Tapa. One of the primary purposes of this exercise is to validate the primarily conscript 2nd Brigade as they near the end of the training cycle and to test them yesterday they faced an attack by the all-professional Scoutspataljon, aka the Eesti Scouts, supported by elements of the UK-led NATO eFP (enhanced Forward Presence) including Challenger 2 main battle tanks which worked alongside the Scouts’ CV9035EE infantry fighting vehicles.

After watching the Scouts and their Allies advancing to contact from the south, we circled the polygon (training area) and passed south through the emplaced Yellow Forces to a key river crossing protected by a minefield which Blue Forces had to overcome. The accompanying photos should give you a little taste of what we saw as an appetiser for the main feature I plan to pen at a later date once my Baltic assignment ends, as later today I head back out into the field.