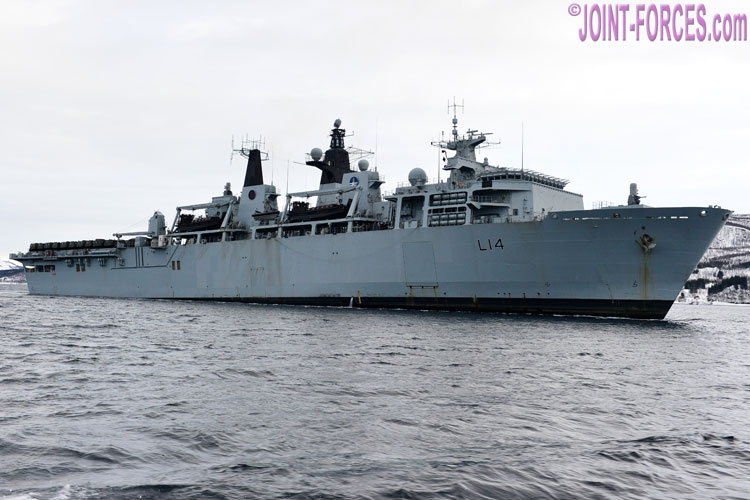 COLD RESPONSE is a biennial winter exercise, which this year has been taking place in an area stretching from the town of Narvik to Finnmark district in northern Norway, with the main activity in the district of Troms. The main aim of the exercise is: “to secure the Norwegian Armed Forces and Allies’ ability to conduct multinational joint exercises with a high-intensity combat scenario in demanding winter conditions” and “another important aspect of the exercise is to train the large amphibious capacities”.

The accompanying images were taken yesterday, 11th March, during a media tour of the RNLMS Johan de Witt Landing Platform Dock (LPD). The tour included a visit of the vehicle deck, a briefing on the Amphibious Task Group and a LCVP tour leading around HMS Albion, RNLMS Johan de Witt and RFA Lyme Bay. In addition to these three ships the Amphibious Task Group includes an escort of frigates, corvettes and minesweepers. Aboard the amphibious ships are two battalion-size landing forces; one British, formed around 45 Commando Royal Marines, and one multinational, formed around the Netherlands 2nd Marine Combat Group of the Korps Mariniers. The Dutch formation also features a company from the German Seebataillon and a Belgian Para-Commando company. There are about 1,100 sailors, soldiers and airmen of the Royal Netherlands Armed Forces deployed to Norway and the number of British participants was given as 2,000.