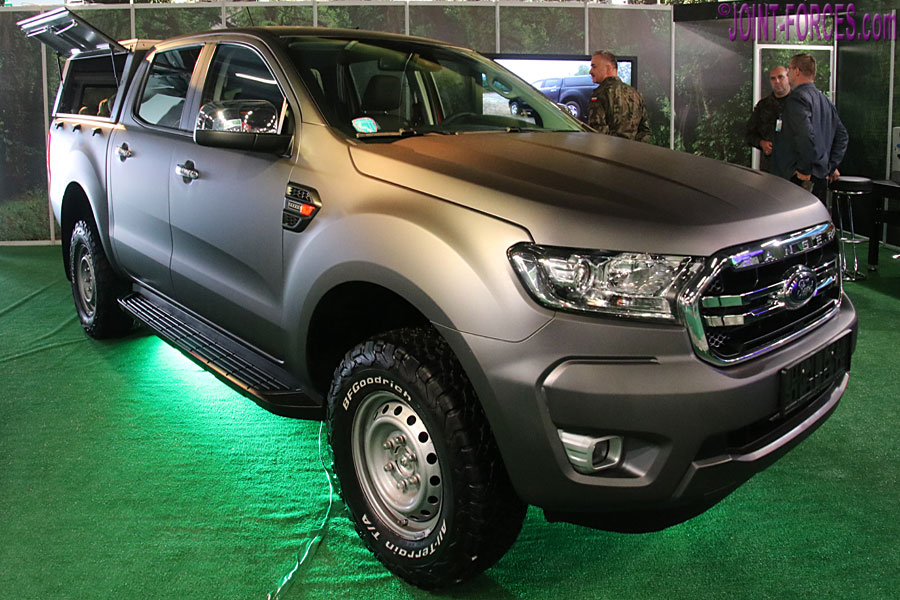 Originally it had been intended that the Nissan Navara would replace the Tarpan Honker, under Project MUSTANG, but after this decision had been taken the Japanese company decided to terminate European production at its Barcelona factory meaning the Ford Ranger XLT had to be proposed instead.

On 1st July the prime contractor, Glomex Military Supplies, announced: “In March this year, we won the Tender to supply more than six hundred all-terrain pick-up vehicles for the Polish Army. Our local branch, Glomex MS Polska, produced the winning Tender bid by offering modified Nissan Navara vehicles. However, at the end of May, the Japanese car maker announced that; due to the Coronavirus crisis, later this year it was closing the European factory where the cars were due to be manufactured.

“The possibility of securing Nissan Navara vehicles manufactured in South Africa was investigated, but unfortunately their specifications did not meet the requirements of the Polish Army. This forced us to negotiate an alternative solution for the Polish Ministry of Defence.

“Glomex MS Polska will now supply the Polish Army with Ford manufactured all-terrain pick-up trucks instead of Nissan. Specifically, the Ford Ranger XLT. Not only does it meet the original specifications including run flat tyres, metal underbody protection and aluminium hard-top roofing, but it also came in at a lower price than the Nissan original.”

On Friday 4th September, just prior to the MSPO defence expo, Glomex formally announced: “Our branch of Glomex MS Polska will start delivering Fords of this type to the Polish Army this year – a total of more than 600 units should be delivered.”

The vehicle displayed at MSPO 2020 in Kielce was, I was assured by one of the company’s Contract Specialists, to exactly the same specification as the batch being supplied to the Polish MoD but underneath the top film was a red demonstrator vehicle rather than a production batch example; the greyish olive colour, however, was said to be as close to the final MoD specification as possible. The purpose designed hard top over the rear cargo bed on the vehicle pictured here is identical to that being supplied and inside the BF Goodrich All-Terrain T/A tyres (on pierced steel wheels) were Hutchinson Runflats. As these vehicles are intended primarily for rear echelon, rather than frontline combat, duties they have not been heavily militarised.

According to details provided by the supplier, the vehicle is powered by a 2.0-litre EcoBlue TDCi engine through a six-speed manual gearbox with electronic ‘shift-on-the-fly’ 4×2 or 4×4 transmission. Gross Vehicle Weight is 3270kg giving a payload between 1076kg and 1140kg (presumably the latter figure is with hard top removed). Overall dimensions are 5282x2163x1815mm high, wheelbase is 3220mm and the loadbed measures 1613x1560mm wide. Approach and Departure Angles are given as 28° and 27° respectively with a 24° Ramp Break-over Angle and the Tilt Angle is 35°. Unprepared wading depth is said to be 800mm, though of course this would decrease dependent on the load carried.