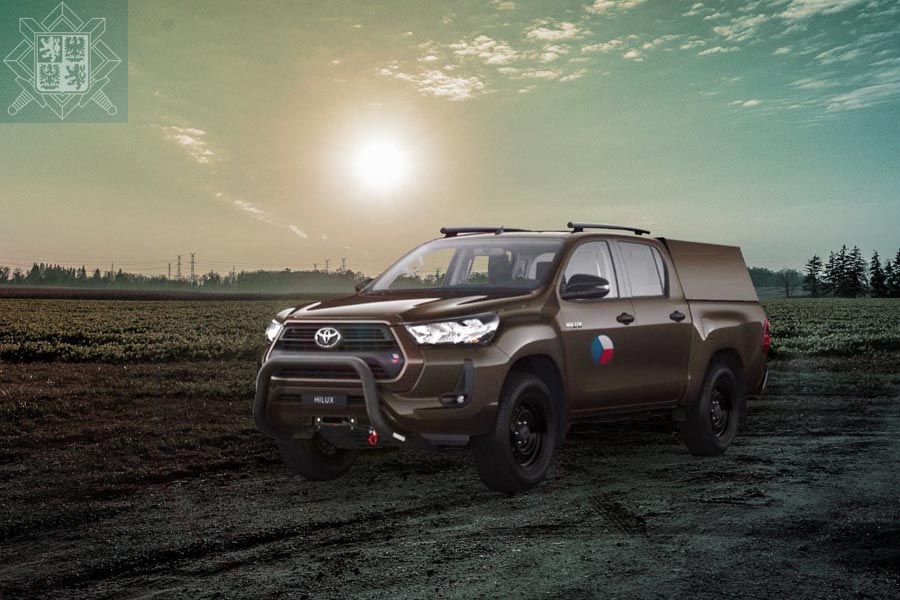 The Czech Army / Ministry of Defence has announced the replacement of its ageing Land Rover Defender* fleet with the Toyota Hilux.

“We are replacing our veterans! And with proven Hiluxes. We want lower operating costs, we want lower consumption, we want affordable service. We just want a versatile car that can handle it all. Proto Hiluxy!”

*Update ~ We have now discovered this press release by GLOMEX, which only mentions UAZ-469 replacement.

Press Release by GLOMEX, Prague, 06 November 2020: In an open tender by the Ministry of Defense of the Czech Republic for the supply of new multi-purpose off-road passenger vehicles for the needs of the Czech Army, the Czech company GLOMEX Military Supplies succeeded with the most economically advantageous offer in a massive competition of 10 companies. Over the next four years, it will supply the army with up to 1,200 modified Toyota Hilux pick-ups. These will gradually replace the old off-road UAZ off-road vehicles of Soviet production.

The results of the tender were announced by the Ministry of Defense at their press conference today. This is the second major success of the integrator GLOMEX Military Supplies in short time in tenders for the supply of off-road vehicles specfically adapted to the needs of the armed forces. This spring, the Polish branch of GLOMEX MS Polska succeeded in the tender announced by our northern neighbours. It will supply the Polish army with more than six hundred specially modified Ford Ranger XLT cars.

The President of GLOMEX Military Supplies ret. Army Gen. Josef Bečvář says: “In both tenders, we assured our customers that we are ready to supply cars in the required specifications, including special modifications at the most advantageous delivery and price conditions. This excellent success of our company, where I have been in top management since the beginning of 2019, is part of our corporate strategy focused on medium-sized projects of the strategic armament of the armed forces of Central European countries. I am convinced that we will be able to build on this success in other projects and confirm that we are a trustworthy and professional integrator which the armed forces can rely on even at the current problematic time. We earn this reputation mainly due to our experience, professionalism, responsibility, transparency, and reliable long-term partners.“

The Toyota Hilux cars, which will be supplied by GLOMEX Military Supplies, are powered by a 110 kW diesel engine. It is the latest version of the Double Cab with space for up to 5 people after the facelift which was introduced by the manufacturer in mid-2020.