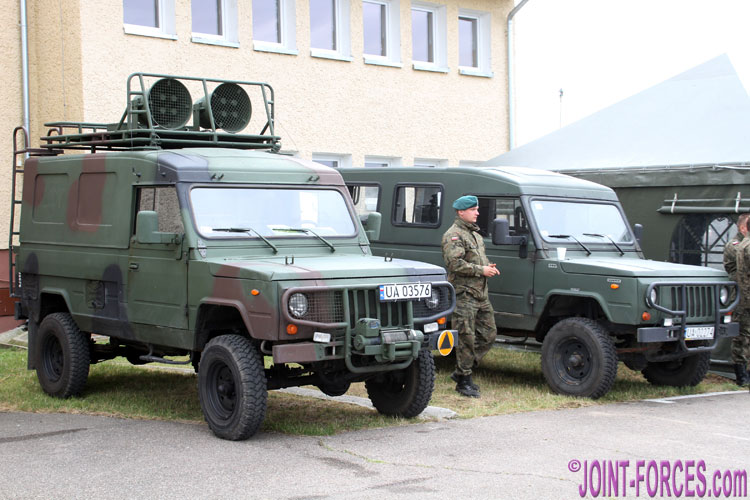 Way back in 1996, when British Forces Germany started using the Drawsko Pomorskie Training Area in North-western Poland for the UHLAN EAGLE exercise series, I had my first encounter with the rather quirky looking homegrown TARPAN HONKER and was surprised by its capability and performance. This vehicle design is now 30 years old, i.e. of roughly the same generation as the UK MoD pre-Wolf Land Rover Ninety and One-Ten models, and although upgraded midway through its service life it is no longer up to modern expectations.

In 2013, when the oldest examples of the TARPAN HONKER were 25 years old, the Ministry started investigating the future replacement of its ageing LMV (Light Multi-purpose Vehicle) 4×4 fleet and in July 2015 it invited tenders for the supply of 841 softskin vehicles in the 3,500kg GVW category, plus 41 armoured variants. At this point it is possibly worth explaining that the Tarpan was a wild horse which roamed the Eurasian Plains very much like the North American Mustang.

Under Poland’s 2015 Project MUSTANG these proposed new vehicles would have been required to replace part of the ageing fleet of HONKER and legacy UAZ 469 medium and light utility vehicles. At that time it was specified that the softskin versions, capable of seating up to nine like the HONKER, would need to be supplied in both soft top and hard top variants.

Poland also has a small fleet of Hum-vees [© BM]

It has been reported that twenty different manufacturers, suppliers and consortia responded offering a wide range of vehicle types ranging from established softskin models such as Ford Ranger, Geländewagen, Land Rover Defender, Toyota Land Cruiser and Toyota Hilux, plus the HONKER 2000, through to the AM General Hum-vee, Navistar SOTV and Panhard PVP in addition to a number of conceptual designs. In June 2017, after two years of evaluation and with only one of the seven submitted vehicles still being in the running, the stalled programme was terminated.

A new programme then commenced, only for this too to be cancelled in May 2018 after just one consortium offered a solution; it is believed that this bid was based on the DINO variants (see below) produced by Team Concept. Unfortunately, the projected cost of the proposed package was reportedly over twice what the Polish Treasury had allocated for the new vehicles, hence cancellation and the launch of a third attempt to find a solution.

The latest, August 2018, Polish MoND requirement is for 900 initial vehicles, 849 softskin and 41 armoured, with an option for an additional 812; first deliveries are required next year. All should be in the 3,500kg class, meaning they can be driven on an ordinary driving licence, with the unarmoured vehicles being able to seat six troops plus the driver with a payload of 1,000kg; the armoured vehicles should carry 4+1 and have a 600kg payload capacity. With the exception of the armoured variants, final supply of which must be by 31st October 2022, all initial contract vehicles must be in-service by 31st October 2021.

To meet the specification, proposed vehicles must be diesel-powered, be all-wheel drive, have 220mm minimum ground clearance and have an unprepared fording depth capability of 500mm. The armoured version must also offer occupants ballistic and mine protection to STANAG 4569 Level 1. Manufacturers must have previously delivered a minimum of 25 vehicles, so that rules out conceptual designs this time, and bids must be received by 28th September.

It will be interesting to see which vehicle, if any, is chosen this time around to replace the HONKER as recent European and North American legislation, not to mention the military switch away from medium utility to protected vehicles, has badly impacted on the availability of off-the-shelf vehicles in the <3,500kg GVW class. While certain pick-up truck and SUV (Sports Utility Vehicle) models can be, and are, militarised comparatively easily it is unusual for these to be able to transport more than four, or five at a push, burly soldiers.

Looking back at the TARPAN HONKER, this vehicle evolved in the mid-1980s out of an earlier state-manufactured pick-up truck, also called the TARPAN, produced by the Poznan-based FSR (Fabryka Samochodów Rolniczych or Agricultural Vehicles Factory) mostly for public service and public utility use during the Communist era. As mentioned above, the name Tarpan, which loosely translates as Mustang, derives from the extinct species of wild horse used by Tartars and Cossacks. The model name HONKER comes from a noted operation by Polish 2nd Corps during the final battle to capture Monte Cassino in World War Two.

Bulk manufacture of the HONKER commenced in 1988, with the majority of production earmarked for Poland’s Armed Forces, and FSR continued to make the vehicle until the Poznan factory was bought by Volkswagen in the mid-1990s. Production was then shifted to the Lublin truck manufacturing facility, owned at the time by Daewoo, but when the South Korean motor company fell into financial difficulties at the turn of the millennium manufacturing rights were transferred to the engine manufacturer. Since then a succession of other companies have acquired the rights and, although production quantities were low, design development continued.

The same vehicle photographed in 2002 from the opposite diagonal [© BM]

To some extent the in-service versions of the HONKER bear a passing resemblance to the long wheelbase Series III Land Rover and its Defender 110 successor, and at 4625mm long by 1870mm wide it is reasonably comparable to the latter. The Polish LMV is, however, much taller than its British equivalent (Polish Military Police Defenders have a heightened roof to give similar internal space) and as its ladder chassis is flat rather than bulged it has a better breakover angle and much greater ground clearance, other than beneath the axle differentials. The wheelbase of both vehicles is similar, with that of the HONKER only being about 50mm (2″) longer, and their GVW is identical, though as the Polish vehicle’s body extends to near full width but the Defender has protruding wheel-arch ‘cheeks’ there is slightly more more room in the back of the former.

The four primary HONKER body styles are: soft top with windowed canopy and rear bench seats; hard top or van; windowed hard top troop carrier or station wagon; and hybrid hard top with two side windows in the rear compartment. There is also an ambulance with a shelter body on a truck cab chassis. All variants, with the exception of the truck cab, have three doors.

The homegrown DINO, which we photographed at EUROSATORY 2018 before it was positioned on its stand, appears to meet the basic requirements but could be ruled out as a HONKER replacement on both cost grounds and because it is conceptual. For more on DINO, including a video clip of the variants in action, see this TEAM CONCEPT page. Most militarised SUVs, like this Bundeswehr Nissan Pathfinder, are too small for more than four or five troops [© BM] Another SUV to be militarised is the Volkswagen Amarok, here in Dutch service – note poor ground clearance [© BM]