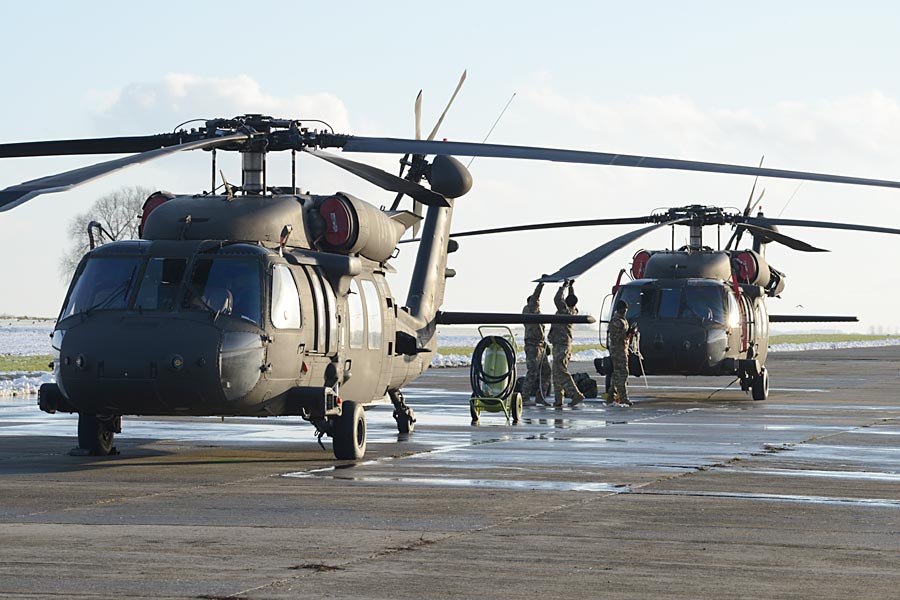 Library image of the crew of a US Army UH-60 Black Hawk helicopter from the 1st CAB, 1st Inf Div, securing blades at Chièvres Air Base in Belgium, 30 January 2019, at the start of the unit's last ATLANTIC RESOLVE deployment [US Army: VIS Pascal Demeuldre]

US Army Europe and Africa has this afternoon issued an update on the seventh ATLANTIC RESOLVE Aviation Rotation.

Press Release: Wiesbaden, 16 February 2021: The seventh aviation rotation in support of ATLANTIC RESOLVE will begin their training efforts in April.

The 1st Combat Aviation Brigade, 1st Infantry Division, from Fort Riley, Kansas, will replace the 101st Airborne Division’s Combat Aviation Brigade in April 2021. This is the unit’s second rotation in support of ATLANTIC RESOLVE. In February 2019, approximately 1,800 soldiers were deployed to Illesheim, Germany, where they developed their skills as a brigade while training alongside our NATO allies and partners.

“The brigade is excited about our rotation back to Europe. We look forward to strengthening our long-standing partnership with our allies and partners, reaffirming the United States commitment to NATO,” said Col. Bryan Chivers, 1st Combat Aviation Brigade commander.

The brigade will support US Army Europe and Africa’s ATLANTIC RESOLVE mission, with personnel in several nations, training alongside allies and partners to demonstrate the United States’ commitment to peace and stability in the region. “Our Soldiers are well-trained and ready to support this mission, and our European partners,” said Chivers.

The aviation rotation will deploy with approximately 1,800 personnel, 50 UH-60 and HH-60 Black Hawks, 10 CH-47 Chinooks, 25 AH-64 Apaches and 1,800 wheeled vehicles and pieces of equipment. Their equipment is scheduled to begin arriving in late February at the ports of Alexandroupoli, Greece, and Dunkirk, France. The majority of equipment and personnel will be stationed in Germany, with a forward presence in Latvia, Romania and Poland.

Prudent COVID-19 precautionary measures like the use of masks, social distancing, and rotational shift work will be taken to ensure the health and protection of participating armed forces and the local population. The brigade will conduct screening, testing and quarantine requirements at Grafenwöhr Training Area before moving to forward locations alongside allies and partners

Since April 2014, US Army Europe and Africa has led the Department of Defense’s ATLANTIC RESOLVE land efforts by bringing units based in the US to Europe for nine months at a time. The deployment of ready, combat-credible US forces to Europe in support of ATLANTIC RESOLVE is evidence of the strong and unremitting US commitment to NATO and Europe. Through bilateral, joint and multinational training, ATLANTIC RESOLVE builds readiness, increases interoperability and enhances the bond between ally and partner militaries.