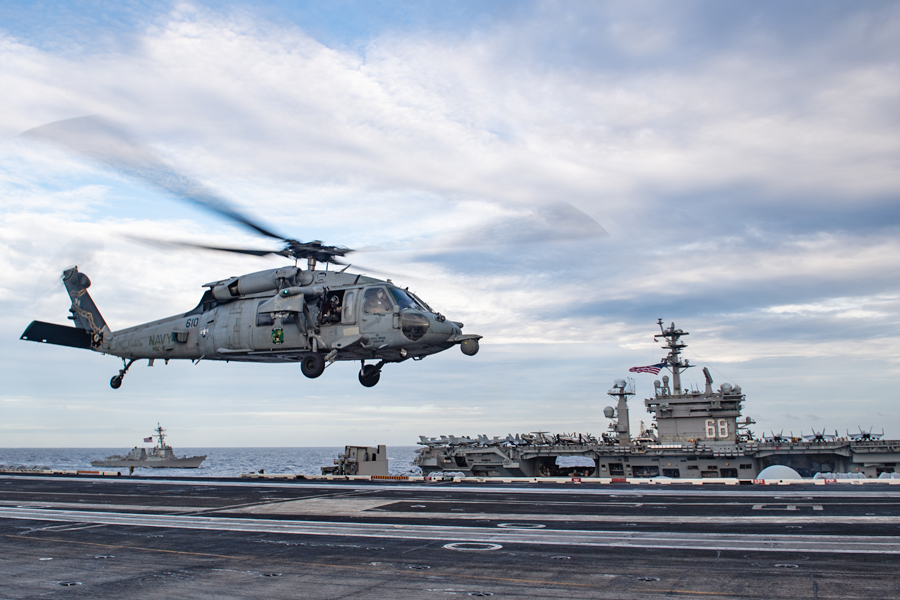 The US Navy Theodore Roosevelt and Nimitz Carrier Strike Groups have conducted dual carrier operations in the South China Sea.

The ships and aircraft of the two strike groups coordinated operations in a highly trafficked area to demonstrate the US Navy’s ability to operate in challenging environments. As a part of dual-carrier operations, the strike groups conducted a multitude of exercises aimed at increasing interoperability between assets as well as command and control capabilities.

“Training with Carrier Strike Group Eleven in the South China Sea is a tremendously valuable opportunity,” said Rear Adm. Doug Verissimo, commander, Carrier Strike Group (CSG) Nine. “Through operations like this, we ensure that we are tactically proficient to meet the challenge of maintaining peace and we are able to continue to show our partners and allies in the region that we are committed to promoting a Free and Open Indo-Pacific.”

Carrier Strike Group Nine and Carrier Strike Group Eleven last conducted dual-carrier operations on June 21, 2020, in the Philippine Sea. The last time the US conducted dual-carrier operations in the South China Sea was in July 2020, when the Ronald Reagan and Nimitz carrier strike groups twice operated together in the South China Sea.

“Working cooperatively alongside Carrier Strike Group Nine improves our collective tactical skill while ensuring regional stability and security,” said Rear Adm. Jim Kirk, commander, Carrier Strike Group (CSG) 11. “We are committed to ensuring the lawful use of the sea that all nations enjoy under international law.”

This exercise falls into a long history of the US Navy operating in the Indo-Pacific. Dual carrier operations, like this one, are not new and are intended to maintain US readiness and combat-credible forces to reassure allies and partners and preserve peace in the region.

7th Fleet is the US Navy’s largest forward-deployed fleet and employs 50 to 70 ships and submarines across the Western Pacific and Indian Oceans. USS Theodore Roosevelt departed San Diego for a scheduled deployment to the Indo-Pacific on Dec. 23 while USS Nimitz departed Bremerton, Wash., April 27 for COMPTUEX and deployment following an onboard restriction of movement period that began April 1.

The Theodore Roosevelt and Nimitz Carrier Strike Groups are on scheduled deployments to the 7th Fleet area of operations. As the US Navy’s largest forward-deployed fleet, the 7th Fleet routinely operates and interacts with 35 maritime nations while conducting missions to preserve and protect a Free and Open Indo-Pacific Region.