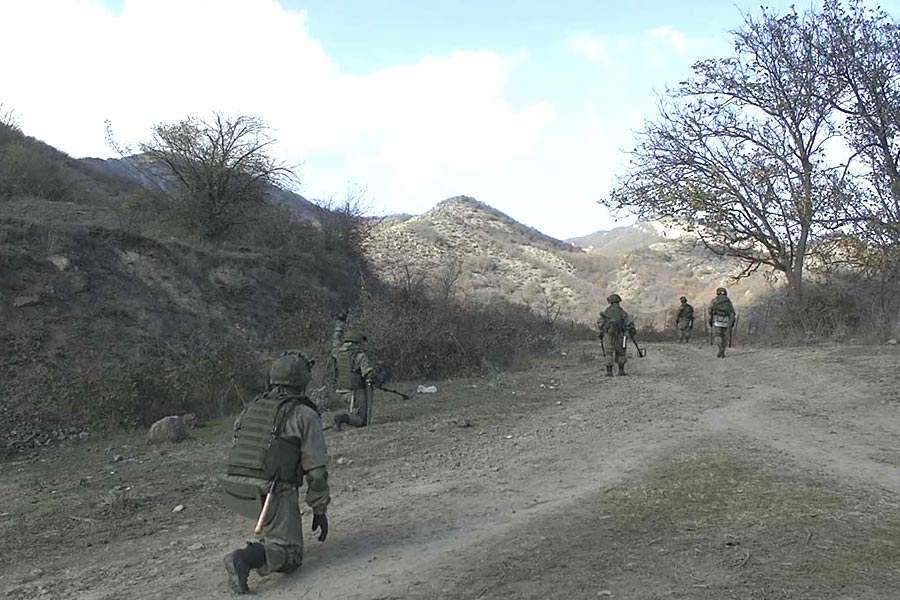 Russian International Mine Action Centre sappers have cleared about three kilometres of the Shusha-Lysogorsky highway in Nagorno-Karabakh.

Press Release, 30 November 2020: [auto-translated] Servicemen of the International Mine Action Centre of the Russian Ministry of Defence continue to work on engineering reconnaissance and mine clearance in the area of responsibility of the Russian Peacekeeping Forces in Nagorno-Karabakh.

Russian engineering units are involved in engineering reconnaissance and demining of terrain and public roads on the routes between peacekeeping observation posts, near settlements and social infrastructure.

The specialists of the Centre carried out engineering reconnaissance and clearing explosives from the Shusha-Lysogorsky road section, about three km long. During the day, more than 100 explosive objects were found, which were taken to a specially equipped landfill and destroyed. In total, during the peacekeeping operation in Nagorno-Karabakh, engineering units have cleared more than 24 hectares of terrain and more than eight kilometres of roads, and more than 750 explosive objects have been found and neutralised. Ammunition that cannot be evacuated to the landfill is destroyed on site after ensuring safety.

The servicemen participating in mine clearance are equipped in modern protective sapper suits and are armed with modern means of searching for explosive objects – mine detectors IMP-S2 and searchers INVU-3M.

Featured, Mine Clearance, Nagorno-Karabakh, Russian Armed Forces, Russian International Mine Action Centre
You may also like