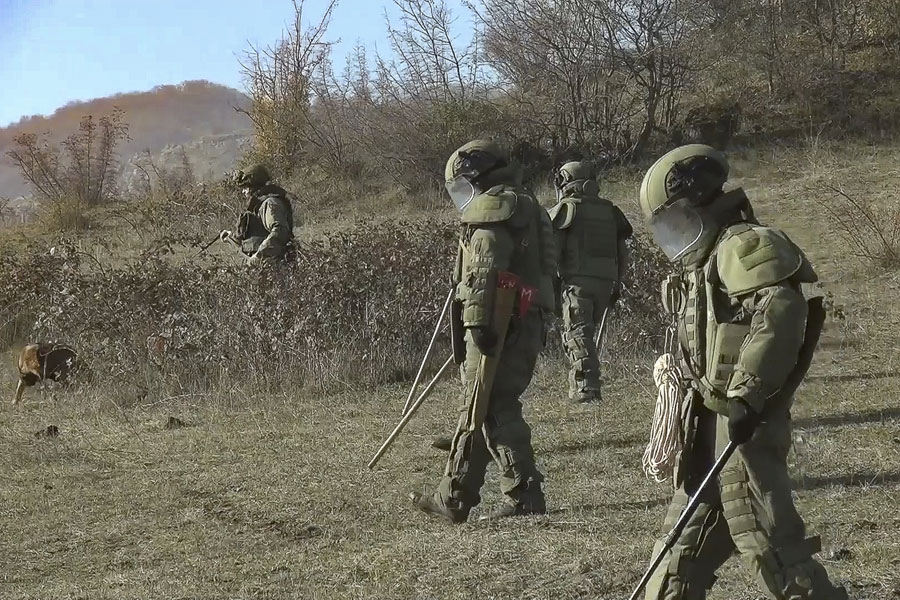 Russian peacekeepers have started de-mining the southern outskirts of Stepanakert, the capital of strife-torn Nagorno-Karabakh.

Press Release, 04 December 2020: Military personnel of the International Mine Action Centre of the Russian Defence Ministry continue to work on engineering reconnaissance and mine clearance in the area of responsibility of the Russian peacekeeping forces in Nagorno-Karabakh.

During the day, Russian peacekeepers cleared a large area of land on the southern outskirts of the capital of Nagorno-Karabakh, Stepanakert, of explosive objects. During an engineering survey of the area, 10 cluster munitions were found.

Detected explosive objects, abandoned or non-exploded ammunition are taken to a specially equipped landfill and destroyed. Ammunition that cannot be safely evacuated is destroyed on site with the necessary security measures in place. In total, engineering units in Nagorno-Karabakh have cleared more than 45 hectares of terrain, more than 14 kilometres of roads, and more than 1,120 explosive objects have been found and neutralised.

The Russian peacekeepers provide the security of the return of the citizens to their places of permanent residence, the humanitarian aid, the restoration of civil infrastructure facilities. With the assistance of Russian peacekeepers, the restoration of vital engineering communications continues in the areas affected by the war. More than 2,000 metres of power transmission lines, seven power transmission towers, 1,600 metres of a gas pipeline, 1,200 metres of communication lines, and one transformer substation were restored per day.