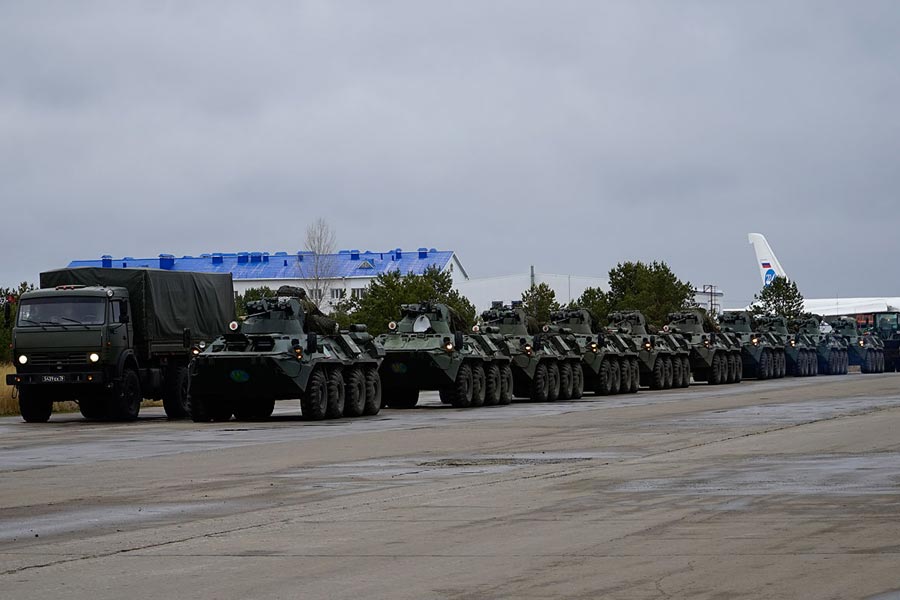 Russian military transport Aircraft continue to transfer units to participate in the Peacekeeping Operation in the Nagorno-Karabakh conflict zone.

Russian MoD Press Release, 12 November 2020: [auto-translated] Aircraft of the Russian military aviation transport continue to carry out the transfer of units to participate in the Peacekeeping Operation in the zone of the Nagorno-Karabakh conflict.

The Ministry of Defence of the Russian Federation continues the transfer of Russian peacekeepers to the area where missions are performed in the zone of the Nagorno-Karabakh conflict. Another two Il-76 aircraft of the military transport aviation of the Aerospace Forces of Russia flew from the Ulyanovsk-Vostochny airfield to Armenia. On board the aircraft are armoured personnel carriers, materiel and personnel of the peacekeeping unit.

Since November 10, the Il-76 and An-124 planes have delivered to Armenia more than 750 military personnel, as well as more than 110 pieces of equipment – armoured personnel carriers, off-road trucks and logistical support.

In order to carry out peacekeeping tasks, prevent possible incidents and ensure the security of Russian military personnel, continuous interaction with the General Staffs of the armed forces of Azerbaijan and Armenia has been organised. Direct communication channels have been established.

For reference: To control the ceasefire and hostilities, a peacekeeping contingent of the Russian Federation is deployed in the zone of the Nagorno-Karabakh conflict in the amount of 1960 military personnel, 90 armoured personnel carriers, 380 units of automobiles and special equipment.

The core of the Russian contingent will be subdivisions of the 15th Independent Motorised Rifle Brigade (peacekeeping) of the Central Military District.

Source: Dept of Information and Mass Communications of the Russian Federation MoD