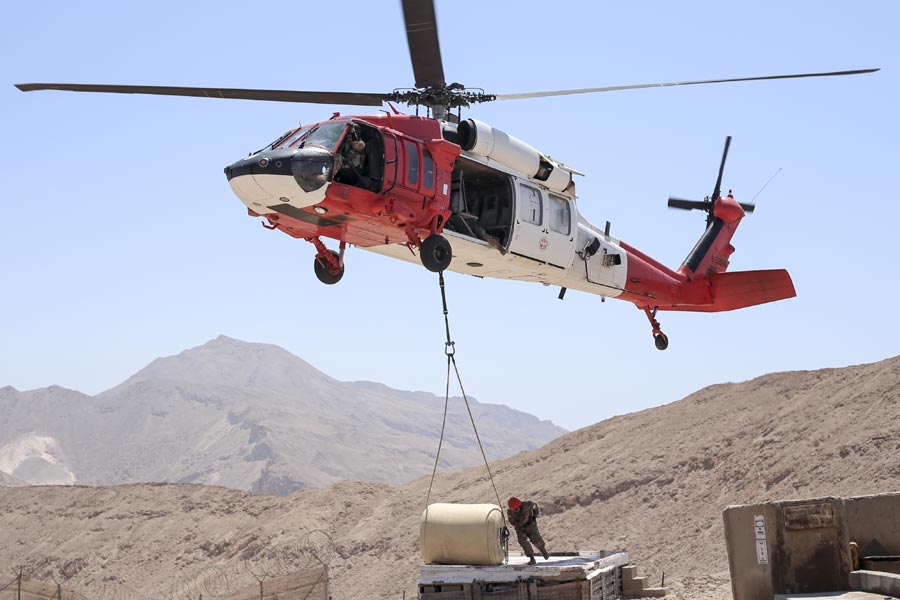 Library image of a UH-60 Black Hawk helicopter delivering a water blivet at a Multinational Force and Observers remote site in the Sinai, 12 September 2019 [US Army: Capt Mark Scott]

The Acting US Secretary of Defense has issued a statement concerning today’s crash of a Sinai MFO helicopter and the loss of eight peacekeepers.

US DoD Statement, 12 November 2020: Statement by Acting Secretary of Defense Chris Miller on Helicopter Crash in the Sinai Peninsula

The Defense Department is deeply saddened by the loss of six US and two partner nation service members in a helicopter crash in the Sinai Peninsula operating with the United Nations [sic] Multinational Force and Observers (MFO).

Yesterday we recognised the sacrifice of millions of American veterans who have defended our nation for generations, and today we are tragically reminded of the last full measure our uniformed warriors may pay for their service.

I extend the Department’s condolences to the families, friends and teammates of these service members.

UPDATE: The Defense Department is deeply saddened by the loss of five US and two partner nation service members in a helicopter crash in the Sinai Peninsula operating with the United Nations [sic] Multinational Force and Observers. (This statement was updated at 5:24 p.m. EST and reflects updated reporting from the Multinational Force and Observers on the number of US service members killed.)

Editor’s Comment: The MFO (Multinational Force and Observers) is an international force established on the Sinai Peninsula in 1981 following the signing of the Egypt–Israel Peace Treaty in March 1979 and the subsequent failure of the United Nations to establish a peacekeeping mission after threats of a Soviet veto on behalf of Syria. The mission of the MFO is “to supervise the implementation of the security provisions of the Egyptian-Israeli Treaty of Peace and employ best efforts to prevent any violation of its terms.” Unconfirmed reports suggest the two non-US victims may be Czech and French.

Featured, MFO, Multinational Force and Observers, Peacekeepers, Sinai
You may also like