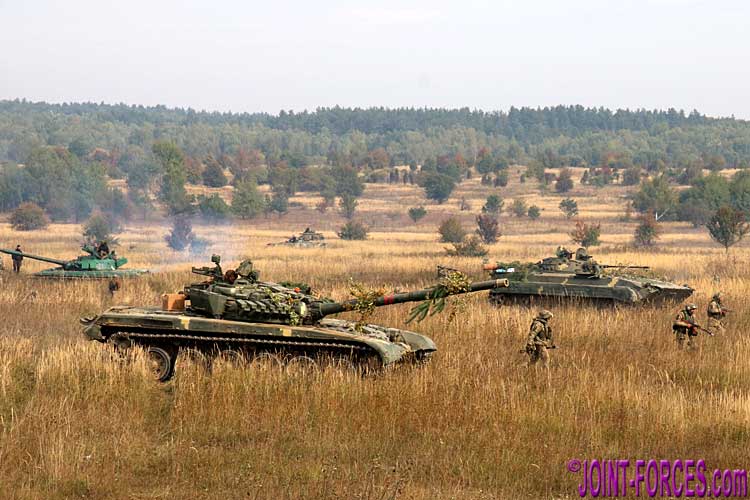 Over the last couple of days we have been in the field with Ukraine’s 10th Mountain Assault Brigade at the International Peacekeeping and Security Center, writes Bob Morrison.

On Tuesday we were able to watch a platoon of Mountain Assault troops first negotiating its way through an improvised checkpoint and then conducting a house clearance operation in a small village with the aim of detaining a High Value Target, before we watched a CBRN decontamination unit at work and then photographed a helicopter medevac taking place.

Yesterday, Wednesday, we joined the Ukrainian Army’s dedicated OpFor (Opposition Forces) unit on the frontline as 10th Mountain Assault Brigade, which earlier in the exercise had been operating on the defensive phase of RAPID TRIDENT 2019 counter-attacked with two battalion battle groups. Using mostly BMP Infantry Fighting Vehicles and a combination of T-64 and T-72 main battle tanks, supported by simulated artillery fire from the brigade’s 122mm towed howitzers, the battle groups broke cover and advanced several thousand metres to over-run the first line of OpFor defences. It was an impressive sight.

In the not too distant future, once back in the UK and after clearing the backlog from a busy September, we intend to bring a more detailed feature on RAPID TRIDENT 2019. We have also picked up a recent MRE, packed in March 2019, from the batch issued to troops in the field on this exercise, which we plan on taste testing for our Rations section along with earlier US Meals Ready to Eat picked up in Yakima and Norway over the last 10 months.