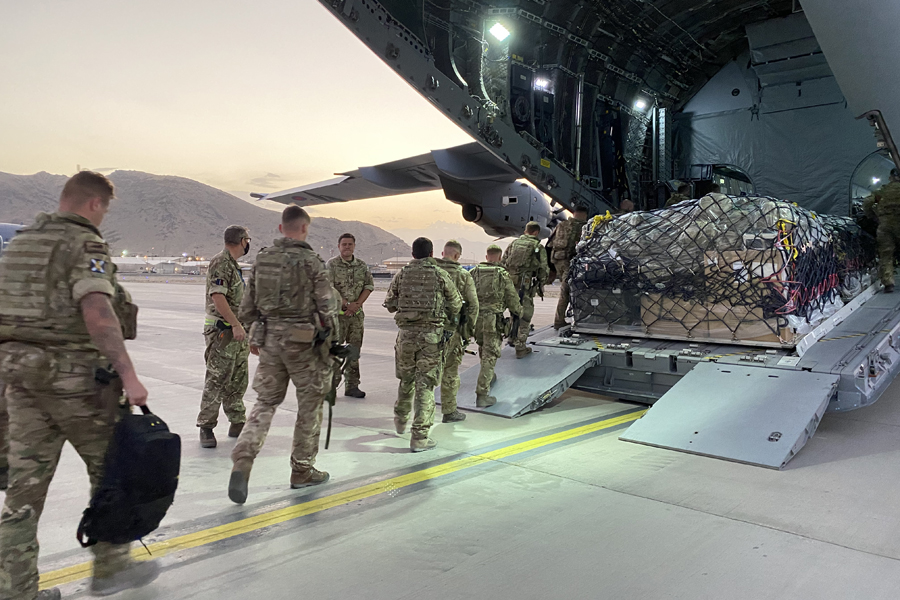 Operation TORAL draws to an end as UK transitions to new phase of support to Afghanistan but some UK personnel will temporarily remain.

UK MoD Press Release, Whitehall, 08 July 2021: As Operation TORAL, the UK’s contribution to NATO RESOLUTE SUPPORT, draws to a close, a small number of UK military personnel will temporarily remain to support the transition to a new phase of UK Government support to Afghanistan.

Operation TORAL has been the UK’s mission in Afghanistan since the end of UK combat operations in 2015. In line with the orderly and coordinated withdrawal of NATO Forces which began on 1 May, the Prime Minister confirmed earlier today that the UK has now withdrawn the majority of our personnel from the country.

A number of troops will remain to offer diplomatic assurance to the international community in Kabul as we transition to the end of the NATO mission. This is consistent with the continued diplomatic presence and retaining a bi-lateral relationship with Afghanistan.

The Secretary of State for Defence, Ben Wallace MP, said: “Operation TORAL is drawing to an end, but our enduring support for the Afghan Security Forces and Afghan Government has not.

“We owe a huge debt of gratitude to all those who have served in Afghanistan over the past 20 years, particularly those who lost their lives. Their efforts have helped prevent international terrorism and set the country on the path to peace. We hope the deal struck last year will form the basis for progress.

“We will now continue this important work as we transition to a new phase in Afghanistan.”

Since 2001, 457 members of the UK Armed Forces have sadly lost their lives in Afghanistan, with more sustaining life-changing injuries. The country owes them a huge debt of gratitude, and their sacrifice must never be forgotten. Over 150,000 UK personnel have served in the country, and their efforts have not been in vain. UK Armed Forces have helped deny terrorists a safe haven from which they could plan and launch attacks on the UK and its Allies. There has been no international terrorist attack mounted from Afghanistan in the past 20 years.

Alongside NATO Allies, we have trained 5,000 ANDSF cadets, including 330 women, at the Afghan National Army Officer Academy (ANAOA). The ANDSF have led security in Afghanistan for the last six years and are countering security threats across the country.

The logistical withdrawal of UK Armed Forces from Afghanistan has been conducted by elements from across the Armed Forces. The Royal Air Force has flown more than 50 flights, covering more than 100,000 nautical miles. This includes the return of RAF Puma Helicopters, which have transported 126,000 passengers and moved 660,000kg of freight during their deployment in Afghanistan.

Brigadier Oliver Brown, outgoing Commander of Operation TORAL, said: “The men and women who have served as part of Op TORAL should be immensely proud. They have trained thousands of Afghan troops, helped prevent international terrorism and created the conditions for the Afghan Security Forces to succeed.

“The logistical effort to draw the Operation to a close quickly and safely has been an excellent demonstration of the Armed Forces’ extraordinary professionalism.”

Most of the soldiers who have departed Afghanistan are from the 3rd Battalion, the Royal Regiment of Scotland. These soldiers have led the Kabul Security Force (KSF), which provided force protection for coalition mentors, including a Quick Reaction Force in Kabul. The Regiment marked the drawdown of Operation TORAL with a flag lowering ceremony on 24 June, attended by General Miller, Commander of RESOLUTE SUPPORT Mission.

The withdrawal of British forces does not mean the end of our commitment to Afghanistan and we will continue to use diplomatic and humanitarian levers to support Afghanistan’s development and stability. The UK has already provided £3.3 billion of aid funding since 2002, which has helped improve the rights of all Afghans, including:

Through our Afghanistan Multi Year Humanitarian Response Programme, we will continue to provide urgent lifesaving assistance to immediate humanitarian need. The UK is also a substantial contributor to the Afghanistan Reconstruction Trust Fund, which continues to fund infrastructure development, resilience to climate change, and rural development.

The Government also remains committed to the many interpreters and other locally employed staff who risked their lives working alongside UK forces in Afghanistan. Through the Afghan Relocations and Assistance Policy (ARAP), we will continue to relocate them to the UK and support them in building their lives here.