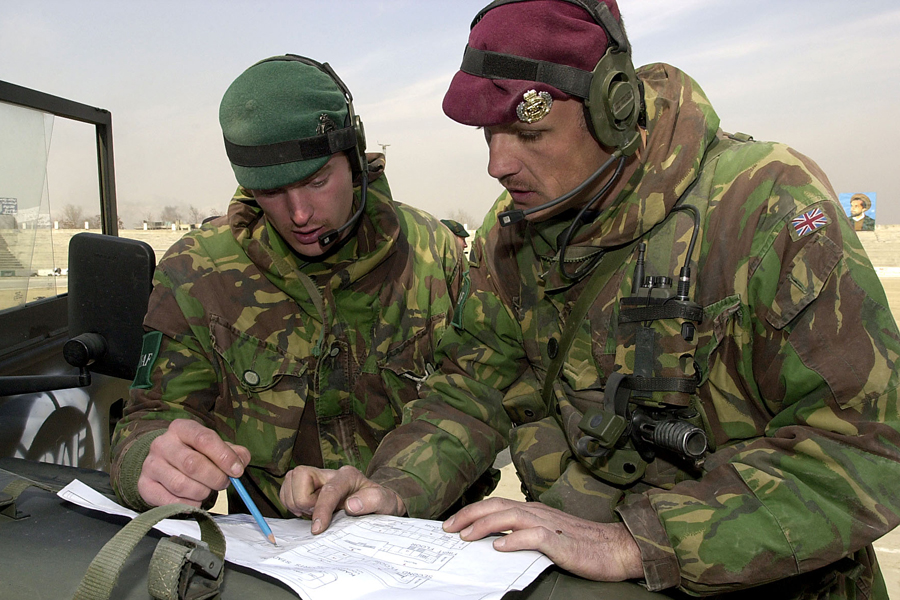 Library image from February 2002 of British troops deployed in Afghanistan on Operation FINGAL under the auspices of the International Security Assistance Force (ISAF) to assist the interim administration with security and stability [Crown Copyright: Cpl Mark Ballantyne]

600 additional UK military personnel will deploy to Afghanistan on a short-term basis to provide support to British nationals leaving the country.

Press Release, Whitehall, 12 August 2021: Additional UK military personnel will deploy to Afghanistan on a short-term basis to provide support to British nationals leaving the country, the Defence Secretary has announced.

The additional deployment of approximately 600 troops is in light of the increasing violence and rapidly deteriorating security environment in the country. In parallel, the number of staff working at the British Embassy in Kabul has been reduced to a core team focused on providing consular and visa services for those needing to rapidly leave the country.

UK troops will provide force protection and logistical support for the relocation of British nationals where required and assist with the acceleration of the Afghan Relocation and Assistance Policy (ARAP). This will help to make sure interpreters and other Afghan staff who risked their lives working alongside UK forces in Afghanistan can relocate to the UK as soon as possible.

Defence Secretary Ben Wallace MP said: “I have authorised the deployment of additional military personnel to support the diplomatic presence in Kabul, assist British nationals to leave the country and support the relocation of former Afghan staff who risked their lives serving alongside us.

“The security of British nationals, British military personnel and former Afghan staff is our first priority. We must do everything we can to ensure their safety.”

The additional military support announced today will arrive in Kabul over the coming days. Sir Laurie Bristow, the UK’s Ambassador to Afghanistan, will continue to lead a small team in Afghanistan which will relocate within Kabul to a more secure location. This team will focus on helping remaining UK nationals to leave the country, and the continued roll out of the Afghan Relocations and Assistance Policy (ARAP) and working with international partners to support the Afghan Government.

Editor’s Comment: In the light of the deteriorating situation in Afghanistan following the rapid withdrawal of Coalition Forces, even a visually challenged bank robber with his balaclava on backwards should have been able to see this one coming!