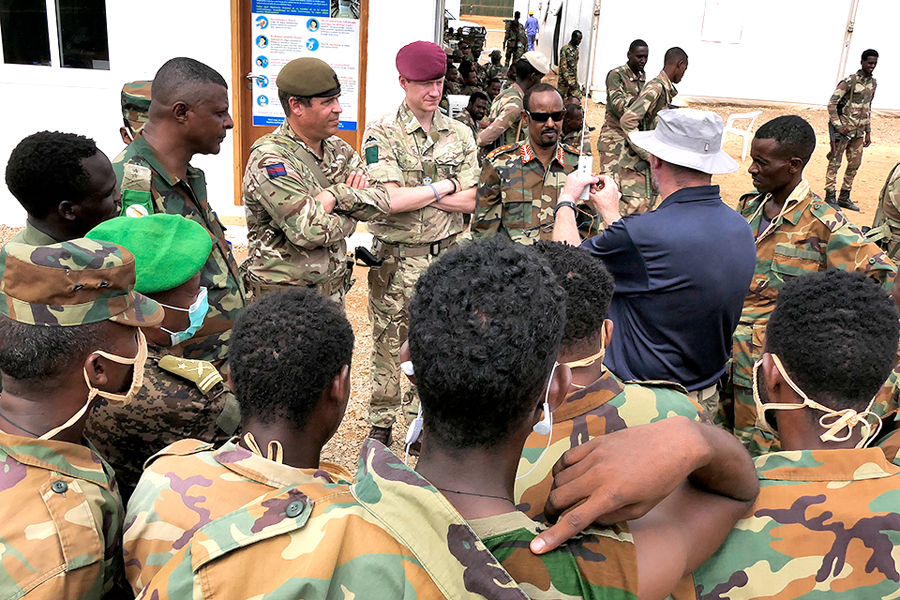 The UK government has reinforced its support to the Somali National Army through three different training programmes in Baidoa.

The British military in Somalia, deployed on Operation TANGHAM, has been running several new training programmes for the Somali National Army in Baidoa, the capital of the Southwest State in Somalia. This includes the Collective Training programme, where over 100 Somali National Army personnel will undergo intensive training on defensive operations, basic command and control, shooting, tactics, communications, first aid, human rights, all to enhance their efforts in fighting Al Shabaab.

The UK military deployed under Operation TANGHAM are also running a joint a key C-IED (Counter-Improvised Explosive Device) course, which remains a major challenge in Somalia. Working in partnership with SNA and African Union Mission to Somalia (AMISOM), the training featured skills on route sweeping in search of IEDs and detonation.

Twenty Somali National Army soldiers in the South West will also be undergoing two-week staff officers course on logistics, planning and executing operations. The course will culminate with the students planning a major operation with assistance and advice from the Mentoring team.

The British Ambassador to Somalia, Kate Foster, said: “The UK is helping to develop a strong professional army to help promote long-term peace and conduct effective operations in the region to counter Al-Shabaab. We are proud to be supporting Somalia to strengthen its effort in this collective fight.”

In January 2021, the British Army trained its 500th Somali soldier in essential infantry skills, underlining the UK’s commitment to Somalia’s long-term security, with plans to train five more companies comprising around 600 troops in 2021.

The UK Minister for Africa, James Duddridge MP, visited Somalia earlier in the year, announcing £1.6 million to counter the threat from roadside bombs, and a further £3.37 million for the Somali Security Forces engaged in joint operations with the AMISOM.