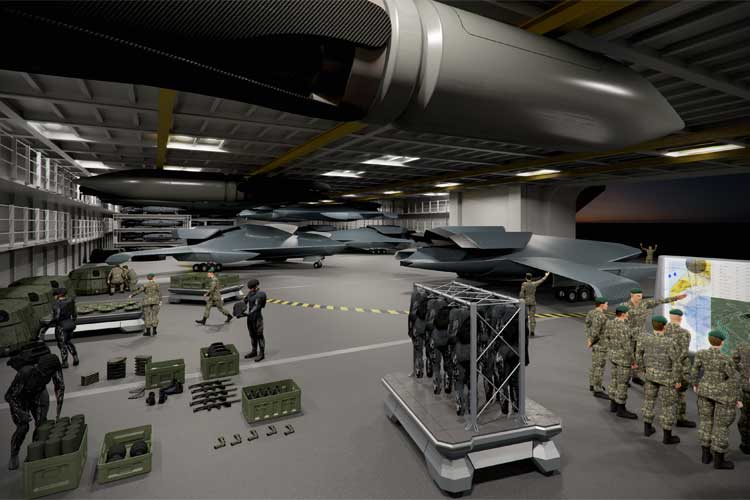 Royal Navy News Release, 26 August 2019. This is the futuristic vision of the Royal Marines dreamed up by Britain’s best and brightest young engineers, told to harness present and future tech to imagine how the Royal Navy’s elite troops might go into action in the future.

Young engineering graduates from the UK Naval Engineering Science and Technology forum (UKNEST), representing nearly a dozen leading defence, technology and engineering firms, were asked to plan a mid-21st Century assault by Royal Marines on an enemy missile site perched on a clifftop.

They came up with a string of ideas – many previously confined to the realm of science fiction:

The graduates spent a day at the Commandos’ Training Centre at Lympstone near Exeter to understand what it takes to become a Royal Marine, some of the current equipment used and the challenges faced on real-life operations.The engineers were then given the raid scenario and thrashed out ideas, looking at what troops would be equipped with, how to get them ashore from ships over the horizon, how the Marines would neutralise a protected target, how they might protect themselves and distract the enemy.

Graduate Chad Swaby came up with the idea of contact lenses with thermal imaging ability and artificial intelligence which can differentiate between civilians, enemy soldiers and hostages – from the way they move.“We can use that information to let Royal Marines know who they need to target and who they need to save,” he added. “The whole event has been a great opportunity for us to see what commandos do, what they have to go through. It’s helped me to understand what I need to give the marines to help them succeed on a mission.”

Major General Matt Holmes, Commandant General Royal Marines, said: “The Marines form over 40 per cent of Britain’s special forces and are seen as the tip of the spear. Our objective has been to envisage radical capabilities to make us more agile and lethal, while being able to operate in a complex digital and networked future environment.

“We can’t say how much or how quickly the reality of these visions will come to fruition. But what we can say is that if only 20 per cent of these ideas come to reality then we will be at the cutting edge of tomorrow’s technology.”

Major Matt Perks, the Royal Marine behind the brainstorming project, said: “This was one of those inspiring projects that captured peoples’ imagination. The Royal Marines have always prided themselves on thinking differently, but we know we don’t have all the answers when it comes to designing the Future Commando Force, so working with these incredibly talented young engineers was a chance to push the conceptual boundaries of amphibious warfare in ways we hadn’t considered. The results have been spectacularly innovative.”

The ideas and equipment the engineers came up with have been incorporated in a short film depicting how the raid on the missile battery might be carried out.

Examples of new equipment the Marines might carry. The aim is to make their Bergen rucksacks lighter and more versatile, with dual use options. Royal Marine Commandos must be at home in any environment from the Arctic to the desert. Commandos are trained to use a variety of high tech equipment to enable them to operate for long periods of time without being detected and when the time comes strike the enemy where it hurts with lethal weaponry.

You see the Marines preparing for the raid and being briefed in the hangar of HMS Queen Elizabeth, the flagship of the Royal Navy. Ekranoplans are at the far end of the hangar and you see a Sycamore Stealth Pod slung from the underside of the hangar ceiling. A successful raid depends on a clear understanding of the situation. A commander must prepare his strike team, and using information from Space, through to gathering intelligence on the ground, Royal Marines will take convert information, fusing big data and sophisticated intelligence to plan their strike accordingly.

Here you see the Ekranoplans, protected by the Force Protection ‘Escort’ Drones. Marines are launched from the rear of the aircraft carrier deck before skimming across the surface of the waves at 300 knots using Ekranoplan wing-in-ground-effect technology (the name Russia gave to the first usable wing-in-ground-effect machines that skim the water’s surface on a bubble of air, thus allowing huge speeds with low drag and minimal power). These stealthy craft operate below the enemy’s air defence systems and can carry both Marine squads and cargo.

This scene looks down on the Marines scaling the cliff. While the enemy believe the main attack is from above, the Marines are outfoxing the enemy and using the element of surprise to attack from the least expected direction. As the Marines scale the cliffs assisted by their bionic crawler extensions, the ‘ghost drones’ are slaved to their ascent and move up the cliff at the same pace, keeping a camouflage protection in place. Other Marines are using short range flight extensions on the back of their Bergens to gain quick access to the top of the cliff to form a solid position while helping to cover the Marines scaling up. Marines unload from their Ekranoplans, already with their crawler gear on, with ‘grunt drones’ overhead carrying their gear, and armed escort drones also in support. Other ghost drones swarm in a cluster to form an adaptive camouflage cloak to cover the Marines assembling on the beach.

Here the Marines are assaulting the enemy’s protected anti-aircraft missile battery. A successful raid depends on surprise and overwhelming firepower from rail guns and speed of light weapons with fire support from heavily armed drones. Holographic images help to confuse and deceive the enemy and hide the main thrust of the assault, enabling the Commandos to push through to the control centre and permanently disable the enemy’s air defence system.

The emblematic Commando dagger. This is a defining feature of the elite Royal Marines. However much technology is improved, the ethos of the Royal Marines has always focused on a tough, determined band of men and women prepared to exert overwhelming force, even if it means fighting hand-to-hand.

With the enemy’s air defence disabled, F35s launched from Queen Elizabeth strike at the enemy’s critical infrastructure. The Royal Marine Commandos are resupplied with ammunition and lightweight vehicles by sycamore drop pods. Re-focused and re-armed the Commandos race to their next objective or slink back into the shadows ready to ambush the all too late enemy reinforcements.

Some of the tech being tested by today’s Royal Marines as well as other innovations will be on show at next month’s DSEi defence and security show in London.