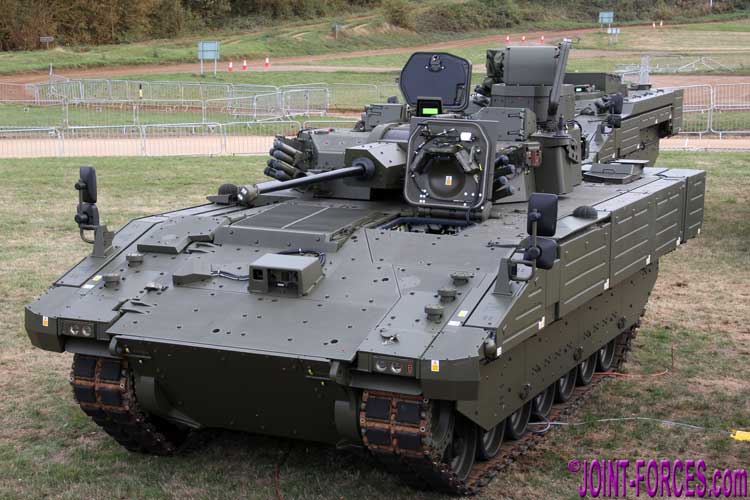 The 589 AJAX vehicles will serve mainly as a reconnaissance vehicle at the heart of the British Army. Its six variants will replace the British Army’s CVR(T) fleet, which has been in service since 1972, with deliveries beginning this year and continuing until 2024. AJAX will deliver best-in-class protection and survivability, reliability and mobility, and a wealth of high-tech reconnaissance systems.

The Secretary of State for Defence Ben Wallace MP said: “AJAX will provide the British Army with improved flexibility, manoeuvrability and battle-winning capability and advantage. Its advanced reconnaissance systems will allow British soldiers to see things first, weigh up their options and take decisive action before their adversaries.”

UK Government Minister for Wales Kevin Foster MP said: “UK Defence spent £960m with Welsh industry last year supporting around 6,300 private sector jobs. This investment in businesses such as General Dynamics makes Wales one of the most competitive places in the world from which to innovate, build business and deliver security.”

General Dynamics UK’s Merthyr Tydfil facility undertakes the assembly, integration and test of AJAX vehicles on-site, with all engineering tasks undertaken at its Armoured Fighting Vehicle Centre of Excellence in Oakdale. At a second Oakdale site, the company also delivers and supports the Bowman Tactical Communication System for the British Army, employing a further 490 personnel.

The £4.5bn in contracts placed with General Dynamics Land Systems for the demonstration, manufacture and in-service support of AJAX support 4,100 jobs in the UK across more than 230 UK-based businesses, 22 of whom are based in Wales, including Kent Periscopes in St. Asaph.

General Dynamics UK currently has 70 graduates and apprentices in its workforce, with a further intake in September. In addition, the company engages actively with local primary and secondary schools, encouraging interest in STEM (Science, Technology, Engineering and Mathematics) careers. General Dynamics has been in the UK for 57 years and employs more than 1,500 highly-qualified people across multiple locations, including Oakdale, Merthyr Tydfil, Royal Leamington Spa and Hastings.

The company has also successfully delivered the Cougar-based Mastiff, Ridgback and Wolfhound fleet and Foxhound vehicles for the British Army, as well as a wealth of avionics systems for aircraft and helicopters, including the Eurofighter Typhoon.

Editor’s Comment: As no images of AJAX, or its variants, were made available with this official UK Ministerial Press Release we have had to use our own library images of pre-production vehicles.