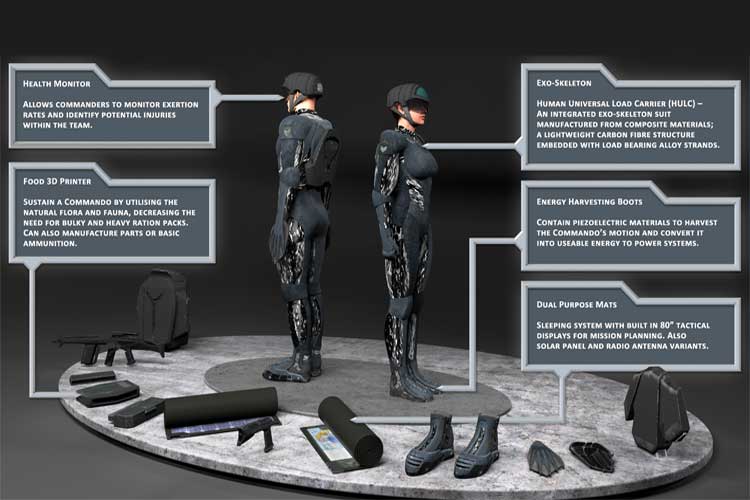 This is the futuristic vision of Royal Marines equipment dreamed up by Britain’s best and brightest young engineers told to harness present and future tech.

This page expands on the futuristic Royal Marines equipment envisioned in the Royal Navy’s How Bionic Commandos Might Fight Future Wars Press Release of 26th August 2019.

Human Universal Load Carrier (HULC) – An integrated exo-skeleton suit manufactured from composite materials; a lightweight carbon fibre structure embedded with load bearing alloy strands. The HULC provides a weight-bearing frame allowing the Royal Marine Commandos to transport heavy loads of various equipment, for extended operations, greatly increasing their strength and endurance. Nano-fibre pressure sensors woven into the Future Combat suit transfer the Commando’s motion into low power signals to drive motion. The HULC suit is actuated by a nickel hydroxide material, which responds to the low power signals to morph shape, and can exert and withstand forces thousands of times greater than its own weight.

Combat Skin – The ‘fabric’ of the Future Combat Suit will be constructed from a synthetic polymer. Kevlar strands woven into the combat skin will provide protection equivalent to modern body armour. A Nano-LED mesh embedded in the polymer incorporates an adaptive camouflage system in the Combat Skin, allowing Commandos to control their appearance and melt seamlessly into their surroundings. The polymer fabric will also contain controllable micro-pores to regulate the Commandos’ temperature in extreme conditions.

Battlefield Perception Helmet – The future Commandos helmet provides complete battlefield situational awareness to each Royal Marine Commando. A visor display provides a range of information views to the marine, from simply an enhanced and sharpened view of the real world in front, to tactical overlays, squad health displays to monitor exertion rates and identify potential injuries within the team, combat information, low light, thermal and other enhancements and integrated feeds from other Royal Marines assets.

Energy Harvesting Boots – Sturdy and durable, the future Commands boot will contain piezoelectric materials to harvest the Commando’s motion and convert it into usable energy to power the HULC, Combat Skin and other systems, such as radios.

The students were also asked to look at the more mundane aspects of a Royal Marine’s life, and how to improve it. One crucial idea was how to make their Bergen rucksacks lighter, more comfortable and how some of their kit could be made dual-use.

Magnetic Bergen Rucksack– The iconic Royal Marine Bergen rucksack will continue to provide capacity to transport all the equipment Commandos require to survive and fight on operations. The Bergen will be magnetically attached to the Future Combat Suit, the magnetic coupling will be designed to act as an energy damping system, allowing a weighted Bergen to move on the Marine’s back, reducing strain and shock when being carried over challenging terrain.

* The image of Royal Marines yomping became one of the iconic images during the Falklands War where they marched at speed for 56 miles in three days carrying in excess of 100lb loads after their helicopter transports were sunk on the Atlantic Conveyor cargo ship.

Portable 3-D Food Printer – Developing on from current fledgling 3-D printing technology, future portable printers will be able to manufacture food on demand. The printer will be able to ingest natural flora and fauna to synthesise ration packs to sustain the Royal Marines, allowing them to survive even if their supply lines are cut.

Gecko Unit (with flight attachment) – An optional system available to Commandos undertaking vertical assault missions, the Gecko unit will integrate with the Future Commando Suit. Webbed, oversized gloves and feet will be electrically charged making them ultra-sticky, enabling Royal Marines to scale any surface. There is also a short range flight attachment on the Marine’s Bergen with micro turbo jets to give Marines the ability to cross minefields, obstacles or scale small cliffs.

Dual Mode Rifle – The future Royal Marine Commando will combine both conventional rounds and a directed energy (laser) weapon system. The rifle will be linked to the Commando’s visor display, with target motion analysis algorithms providing precision fire solutions straight to the marine for increased accuracy at range.

Future Royal Marine Commandos will deploy into theatre from the Royal Navy’s surface fleet in stealthy ‘Ekranoplans’ – the name Russia gave to the first usable wing-in-ground-effect machines that skim the water’s surface on a bubble of air, thus allowing huge speeds with low drag and minimal power – transforming the way troops are brought ashore.

With a sleek arrow head and low-drag profile the Ekranoplans will be able to deploy from the Queen Elizabeth Class aircraft carriers far out at sea, away from hostile forces. Dynamic fan drives are housed in an angular pod top and aft of the main body. Powered by a hybrid drivetrain comprising a compact gas turbine and dual carbon batteries, the fans will boost the Ekranoplan up to speeds of 300 knots (more than 20 times the current speeds). The vehicle can swiftly cover large distances from the carrier strike group, before switching to its batteries and water-jet propulsion system for low speed, silent manoeuvring as it approaches its insertion point to deploy the embarked team of Royal Marine Commandos. An active camouflage system embedded in the Ekranoplan’s hull provides enhanced stealth capabilities to the vehicle.

Force Protection ‘Escort’ Drones – Force protection is provided to the Ekranoplan landing craft by autonomous Escort Drones. These diamond shaped flyers are controlled via a neural network slaved to an Ekranolplan command system. The Escort drones have a modular payload system and can be fitted out with weaponry, sensors and communication systems to support and protect Royal Marine insertions.

Personnel ‘Ghost’ Drones – A smaller variant of the Escort Drone, Ghost drones accompany Royal Marine Commandos into the field on operations. Their small size and low signature level allow them to remain covert alongside the marines. The drones are equipped with multi-spectral sensors which feed directly into a Commando’s helmet visor display. This provides the commandos with real time ‘eyes and ears’ on the ground, greatly enhancing their situational awareness. The Ghost Drones are equipped with a ‘decoy dog’ system, this holographic projector is capable of projecting three dimensional images (human, canine or otherwise) to distract and disorientate adversaries and provide the Commandos a significant tactical advantage.

Sycamore Stealth Pod – Capable of being fired from an electro-magnetic rail gun mounted on a Royal Navy ship, Sycamore Stealth Pods enter high altitudes at high supersonic speeds giving them ranges of more than 100 miles. These bullet shaped projectiles are not intended as munitions, they can carry supplies and are large enough even to fit a Royal Marine Commando. Two sets of contra-rotating blades open during the pod’s decent, bringing them to earth quietly for covert insertions. The rotating blades power a generator, with the energy generated being stored to act as a power source. This power source also allows the pod to operate in gyro-copter mode for extraction from the combat zone.

[All graphics are Crown Copyright]