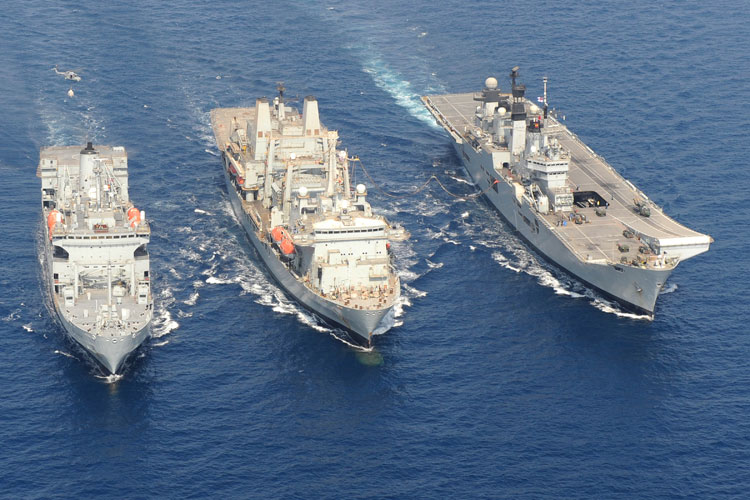 The UK MoD has today announced four shipbuilding firms and a British consortium have been selected to compete for the RFA Fleet Solid Support ships contract.

News Release, 30 November 2018: A syndicate of British firms, along with four international shipbuilding companies, have been selected to compete for the Fleet Solid Support ships contract, Defence Minister Stuart Andrew has announced. The crucial vessels, which will deliver ammunition, food and supplies to UK forces across the globe, will work alongside the Royal Navy’s fleet of warships and will be an important part of the UK Maritime Task Group.

The British consortium is made up of leading manufacturing and engineering companies Babcock, BAE Systems, Cammell Laird and Rolls-Royce. They join Italian firm Fincantieri, Spanish company Navantia, Japan Marine United Corporation, and Daewoo Shipbuilding and Marine Engineering of South Korea as the five successful firms who have been invited to submit a tender for the competition.

Defence Minister Stuart Andrew said: “The widespread interest in this competition shows that our Royal Navy and Royal Fleet Auxiliary remain among the most prestigious in the world.
“These support ships will be vital for supporting our formidable Queen Elizabeth Class carriers and will ensure our warships can deploy in a range of challenging environments and across huge distances, wherever they are in the world.”

The five companies, which were selected from eight interested firms, will now develop bids before a final decision is made regarding the winning bidder in 2020.

The Fleet Solid Support ships, up to three of which will be procured through international competition as they are not warships, will be fitted with specialist and classified equipment at a British shipyard before entering service with the Royal Fleet Auxiliary from 2026. Shipyards across the United Kingdom will be able to bid for this work in 2022.

As part of the Royal Fleet Auxiliary, the vessels will be civilian-manned and carry self-defence weapons only.

Footnote: The two current Fleet Solid Support Ships operated by the RFA are Fort Austin and Fort Rosalie. The third Fort-class ship, RFA Fort Victoria, is larger and an oiler rather than a stores ship.