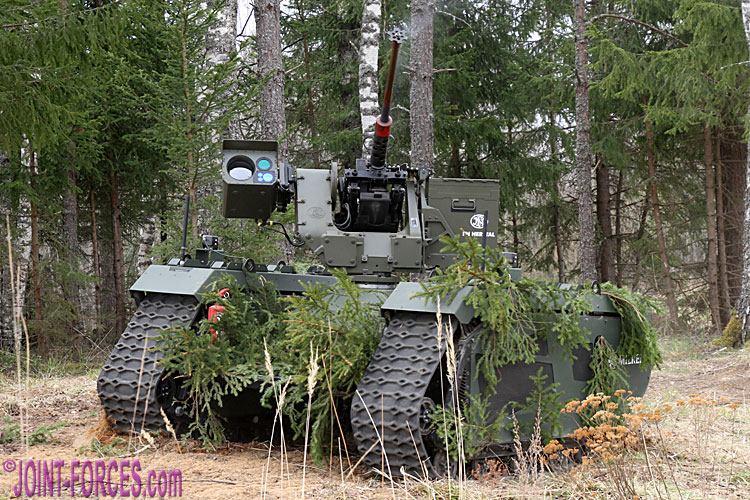 From MoD-supplied video footage published by both the Daily Mail and the BBC over the last week or so it has now become clear that the THeMIS (Tracked Hybrid Modular Infantry System) UGV (Unmanned Ground Vehicle) developed by MILREM Robotics of Estonia was one of the major systems trialled on the UK AUTONOMOUS WARRIOR programme which has been running over the last four weeks on Salisbury Plain as centrepiece of Army Warfighting Experiment 2018.

According to the Daily Mail, the remote-controlled mini-tank (their description) is being called TITAN STRIKE by the British Army, is being evaluated as a means of attacking enemies without putting soldiers at risk and has apparently been “firing a laser beam to simulate live rounds of ammunition”. It is said the UGV is controlled by a soldier using a tablet to plot locations on a map and can be driven remotely using a joystick.

Kuldar Vaarsi, CEO of MILREM Robotics has stated the company’s THeMIS tracked UGV “has proven itself to be an ideal platform for various weapon systems integration.” The UGV has already passed live fire tests with the FN Herstal deFNder Medium RWS, the ST Kinetics ADDER and the Aselsan SARP plus an anti-tank system with the MBDA IMPACT (Integrated MMP Precision Attack Combat Turret) system is also in development.

Basic dimensions of THeMIS, without weapon station, are just 2400x2150x1110mm and kerb weight is 1450kg with a 750kg payload capacity. Run time as a hybrid, with a diesel engine, is 8-10 hours and on battery power only is 30-90 minutes, dependent on payload and mission. Patrol speed is 20km/hr.

In the video clip below, which we shot in Estonia in June last year, THeMIS is fitted with the FN Herstal deFNder RWS (Remote Weapon Station) and it is engaging, with blank rounds, a simulated attacking helicopter approaching troops in static positions.

Footnote: In mid-November JOINT-FORCES.com was invited by MoD Whitehall to a media facility tomorrow (Monday 10th) for AUTONOMOUS WARRIOR on Salisbury Plain but on enquiring last Thursday at what time we should arrive we were informed that the facility was now “at capacity” so we could no longer be accommodated. Sorry guys, we would have loved to have provided wider coverage for both our readership and those manufacturers who have invested heavily in supporting the event, but if MoD is unwilling to cooperate our hands are tied.