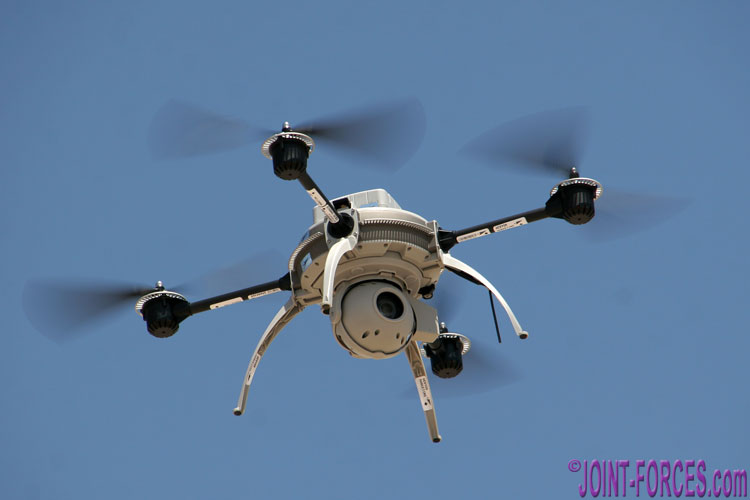 Personnel from the Force Protection Centre at RAF Honington recently carried out an RPAS Operational Capability Demonstration at RAF Akrotiri in Cyprus.

Press Release, 27 November 2018: Force Protection (FP) Force personnel from the FP Centre at RAF Honington recently carried out an Operational Capability Demonstration (OCD) utilising Remotely Piloted Air Systems (RPAS) to enhance Force Protection at RAF Akrotiri. The FP Centre’s RPAS Team have been issued with a provisional Categorisation for Class 1(b) MIL RPAS to operate on all RAF Units day and night. In doing so they are one of the 1st in Defence to be authorised for operation in this class.

WO Galloway said: “RAF Akrotiri was a challenging Complex Air and Ground Environment to operate a new system within, however we perfectly demonstrated how using novel technologies can have direct impact as Force Multipliers”

An RAF Police dog handler and members of 34 Sqn RAF Regiment were involved in the trial as they are currently providing FP support to RAF Akrotiri. The RPAS provides the Quick Reaction Force (QRF) commander with a live picture of the battlespace and incident, vastly improving his situational awareness before he briefs his section to move and restrain the intruder. This positive identification of an individual or threat can swiftly bring an incident to a close, allowing the air commander to maintain air operations unhindered.

Deputy Squadron Commander No. 34 Sqn RAF Regiment Flt Lt Tom Wardell said: “The RPAS is an excellent rapidly deployable capability for the FP Force providing enhanced FP for an airbase and its assets.”

The RPAS team will now complete a number of OCDs on UK RAF Stations.

Background: Due to a known lack of B-ISTAR capabilities at UK MOBs, the Air Force Board sanctioned an investigation into the utility of relatively low-cost Commercial Off The Shelf (COTS) Unmanned Air Systems (UAS), aimed at enhancing Force Protection and Security. This was commissioned as Project AMYNTAS, a Rapid Capabilities Office led trial with support from DSTL, AWC and the Force Protection Centre. This project confirmed the effectiveness of UAS as a significant FP ISR asset and the report will be finalised in Nov 2018.

Following the success of Proj AMYNTAS, an Operational Capability Demonstration (OCD) was initiated by FPFHQ to provide further evidence of utility at specific MOBs. This aims to display the ability to enhance FP through integration with Station security, whilst deconflicting with ATC and enabling Air Ops. RAF Akrotiri was 1 of 6 MOBs selected to be part of the UAS OCD due to the strategic importance and unique security scenarios presented within the region.

The Aeryon SkyRanger is a vertical landing and take-off quadcopter that can be controlled through tablet and stylus, or by a controller attachment for ease of operation. The SkyRanger can operate in high winds (gusting up to 55 knots) and has an IP rating of 53, enabling the platform to be flown in adverse weather conditions and heavy rain. This platform can carry various payloads including a 30x HD Zoom camera that can identify a VRN up to 1000m away. The other is an Electro-Optical/Infra-Red camera that can easily switch between the standard visual camera and thermal imagery spectrums with the tap of an icon. This enables a manoeuvrable asset that can dramatically assist FP personnel with heat spot recognition and is especially effective during the hours of darkness.