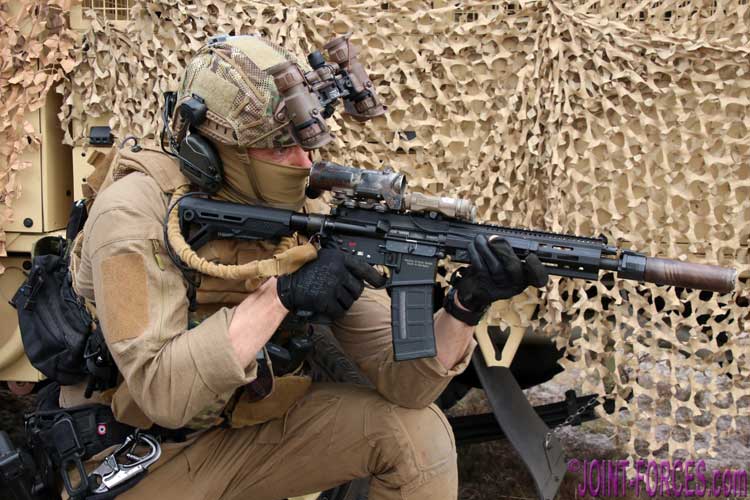 Picking up where I left off – to first visit the US Army Joint Modernization Command at Yakima Training Center and then cover Exercise KEVADTORM in Eastern Estonia – in this fourth album in the FSF series I look at the team from Navy Special Forces (Force des Fusiliers Marins et Commandos or FORFUSCO).

These French Commandos joined the three primary components of Army Special Forces Command (Commandement des Forces Spéciales Terre or COM FST) during the dynamic display at the Camp de Souge SF base near Bordeaux. While this display involving four different branches of the Special Forces may have been a little contrived, designed to show off some specialist abilities of each of the units, the actual scenario of a High Value Hostage Rescue was all too real… as would come to light just last week when two experienced Commando SNCOs gave their lives during the rescue of tourists being held hostage by Islamist terrorists in Burkina Faso.

France’s Commandos Marine, who trace their routes back to Achnacarry in 1942 and the formation of No. 10 (Inter-Allied) Commando in WWII, are the French Navy’s Special Forces and deemed to be the equivalent of the US Navy SEALs. They wear the green Commando beret (their nickname is Bérets Verts) and are highly regarded internationally by other Special and Special Operations Forces on account of their wide operational history.

During the display at Camp de Souge, after Army Special Forces in helicopters and Special Patrol Vehicles had established a perimeter and attacked the insurgents holding the hostage, the Commandos were inserted by COUGAR helicopter to mop up the last resistance and retrieve the hostage. After checking the dead insurgents for valuable intelligence the Commandos led the hostage away, shielding her with their own bodies, and prepared for a hot extraction by AirTEP net under a CARACAL helicopter. By my reckoning, the Commandos were on the ground for roughly four minutes and twenty seconds. The accompanying photos were shot over two days, in temperamental weather conditions, in an attempt to capture the action from more than one angle.

Footnote: The two elite French Commandos who gave their lives overnight on 9/10th May during the hostage rescue mission in Burkina Faso, when four hostages (two French, one Korean and one American) were recovered from the clutches of Islamist militants, were named on Friday in a communiqué by General of the Army François Lecointre as Maître (Petty Officer) Cédric de Pierrepont and Maître Alain Bertoncello, both from Commando Hubert. Our thoughts are with their families and friends.