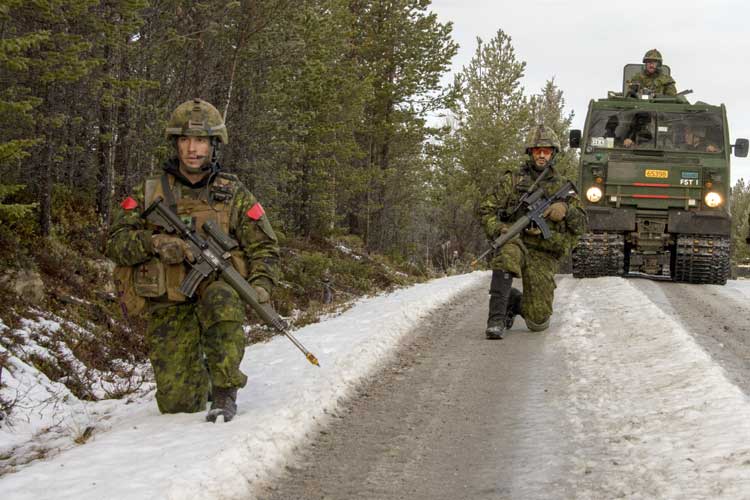 Two members of Company B of the 3rd Battalion Royal 22nd Regiment observe the route to the enemy force during the final assault of an enemy position near Alvdal [DND: Sgt Sebastien Frechette]

In this latest instalment of our TRIDENT JUNCTURE 2018 coverage we are focussing on Canada’s Royal 22nd Regiment, the elite Van Doos, writes Bob Morrison.

Now that the pace of life has calmed down again following the SOFINS 19, JWA 19 and KEVADTORM 19 assignments, and before FEINDEF 19 commences, I am returning to the TRJE18 story.

In our last article we looked at one of two North (Red) Forces contingents, the US Marine Corps 24 MEU, bearing down on the Italian, Spanish and Slovenian troops defending the valley towns of Folldal and Oppdal as components of the Italian-led multinational South (Blue) Forces brigade defending the westernmost of three north-south axes in Central Norway from an advancing aggressive enemy. The second aggressor unit on this axis was provided by Canada’s elite Royal 22nd Regiment (Royal 22e Régiment) who are nicknamed the ‘Van Doos’, which of course is the phonetic Anglicised version of the French for twenty-two.

Having previously worked with the almost legendary Van Doos in Poland, who incidentally I would meet up again with at the beginning of this month in Eastern Estonia, I realised from the outset that my chances of finding the Canadian light infantry unit from 3rd Battalion R22eR who were fighting southwards high up on the mountain ridges east of the Orkdalen valley were minimal. The J-F budget does not stretch to the expense of hiring an over-snow vehicle and my low budget two wheel drive hire car could only take me so far up into the snow-covered mountains on icy rural tracks before losing all traction, so most of the accompanying images illustrating this part of the TRJE18 story were taken by NATO military photographers, but I did manage to catch up with the troops after the battle above Kvikne when they returned to their borrowed Bandvagns in the valley to move further south.

Although the Van Doos were on the offensive during the initial phase of TRIDENT JUNCTURE 2018, acting as a credible OpFor (Opposing Force) for the Italian-led defensive reinforcement NATO battlegroup on the west axis, they were also themselves testing NATO’s ability to rapidly deploy light role infantry reinforcements from another region. On arrival in-theatre, just as would happen if NATO were actually reacting to a heightened threat on its vulnerable northern flank, the incoming troops were issued Hägglunds Bv 206 (Bandvagn 206) tracked light personnel carriers from a large reserve pool held in climate-controlled storage facilities in the region. The only Canadian vehicles which I spotted on the Orkdalen valley axis were unarmoured Mercedes-Benz badged Geländewagen light command and liaison vehicles being used by Directing Staff.

The Canadian combat uniforms worn in Norway were in CADPAT temperate digital camouflage pattern. I did not get a chance to photograph in detail a combat-equipped soldier from the Royal 22nd Regiment in this uniform during TRJE18, but I plan to shortly produce a Kit & Camo article using images of a typical Van Doos light role infantryman photographed in Poland in 2016.

For the next In Focus article in the TRJE18 series I plan to move over to the Centre Axis where a British-led (Blue Forces) multinational battle group was defending against an armoured Red Forces attack.