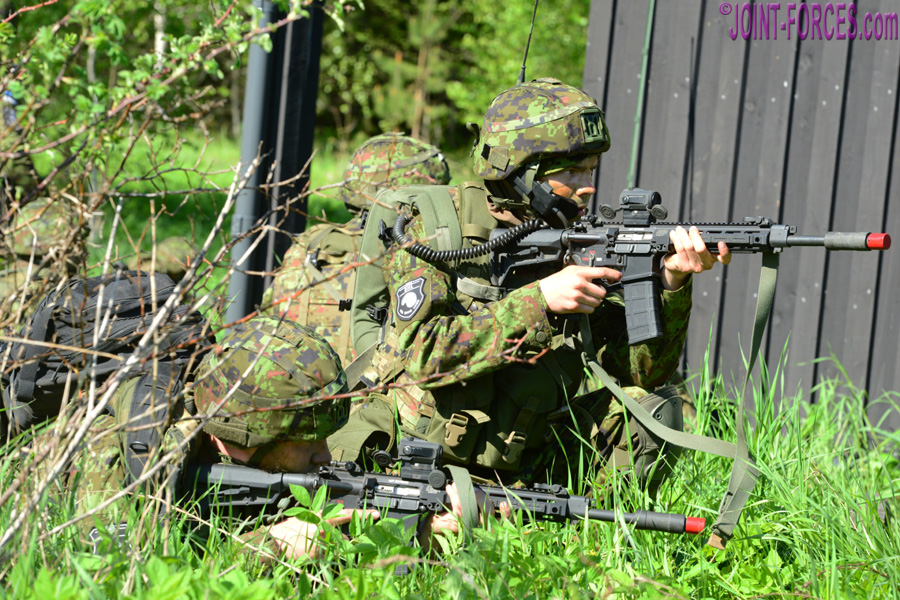 Over the seven years since I first sampled an Estonian 24-Hour ICR, given to me by Estonia’s military media team during the multinational TRIDENT JUNCTURE 2015 in Zaragoza in Spain [just before a German Air Force officer on the NATO media team arranged for a US Air National Guard C-130 to fly me down to Lisbon in Portugal for the next phase of the multinational exercise to ensure I was there in good time to cover an amphibious landing next morning*] the precise content has been slightly tweaked but essentially the overall ration pack is the same.

Exercises SIIL (HEDGEHOG) and KEVADTORM (SPRING STORM) are the two main training packages for Estonian Land Forces at the end of the training cycle, usually held on alternate years, and since 2017 I have tended to cover the latter and my colleague Carl Schulze (who worked in the field with the Estonians attached to the UK ISAF battlegroup in Afghanistan) has covered the former. Earlier this year Carl brought back two different 24H ICR packs for me to check out, Menu 2 and Menu 3, and as luck would have it the latter was the same menu I was given back in 2017 during KEVADTORM. A direct comparison is therefore possible, and although the eight menus have not markedly changed since my last article it is noticeable that not only are there more dehydrated (FD or freeze-dried) pouches than tins, but also a little more of the content is local because Estonian foodstuff suppliers have increasingly risen to the challenge.

Each bagged 24-hour pack, weighing fractionally under 2kg, should generate between 3200 and 3500kcal if all edible items are consumed; which of course they should be (or consumed proportionately if in a sedentary role which requires less calories) to ensure all balanced nutritional requirements are met. Freeze-dried pouches give a weight saving, though of course clean water has to be sourced or carried to reconstitute them, and as water (or snow in winter) is quite abundant in Estonia this should not be an issue. However, unlike canned or wet pouch foodstuffs, dehydrated meals cannot be eaten cold and without preparation if heating and time are not an option, so this possibly explains why some tinned foods are still included.

Personally, I prefer tinned or wet pouch meals as, with one consistently noticeable brand exception, properly reconstituting freeze-dried contents can sometimes be tricky and I hate eating ‘grit’ when I get to the bottom of the pouch. When mixing lyophilised pouches for a Rations feature I always ensure I add precisely the amount of water specified (as I have the luxury of a measuring jug in the kitchen attached to my attic studio) and I always stir well at the start, middle and end of the required standing time. Even so I sometimes find results to be hit & miss, resulting in either an overly sloppy or improperly reconstituted mix. The Dutch ADVENTURE FOOD brand prints fill levels on the outside of the pack, which strikes me as a bit silly as the liquid needs to be added inside; another manufacturer of freeze-dried meals, who both Mike Gormley and I swear by, prints levels on the inside of the pouch and this works well. Estonia’s TACTICAL FOODPACK, who supply horizontal pouches which don’t require a long spoon to get into the corners without making your possibly already unhygienic fingers even more messy, do not provide any mixing levels and merely state the quantity of water required; this might be problematic if you don’t have an accurate method of measuring water in the field.

Turning now to the secondary items, Menu 2 includes a tin of rye bread (pumpernickel) and Menu 3 has two types of biscuits / crackers. I’m not a fan of rye bread, probably because I was brought up on Scots white plain bread; Carl, on the other hand, was brought up on German black bread. However I have to say that the Estonian tinned version is growing on me, and especially so when the supplied (both packs) floral honey is spread on it. However I think I’d still much rather have the biscuits with the ‘stewed chicken ham’ spread.

On the snacks side, Menu 2 includes chocolate covered (hard) peanuts, dried cranberries and a caramel flavoured cereal bar, whereas Menu 3 includes a Swiss chocolate bar with guarana and a French nougat bar. All were good quality and enjoyable. To wash everything down, each Menu offers an energy drink powder, a coffee / 3in1 coffee powder and a fruit teabag. Sugar, salt, pepper, chewing gum, disinfectant wipes, matches (boxed) and a zipped plastic bag for waste are included, but no cutlery is included; spoons in the photos are from other ration packs.

Overall, and minor issues with properly reconstituting the freeze-dried meal pouches aside, the contents of both Estonian ration packs (which I spread out over several days) were pleasant enough and satisfying, though I did end up seasoning the Meatballs with Mashed Potatoes as this one was rather bland ~ Estonian foods are not exactly noted for being spicy, though this is unsurprising for a Baltic region country. However a little bottle of Tabasco or Hot Peeper Sauce might not go amiss.

* Footnote: Now that the legion of UK civil servants in Communications posts, including in the MoD, is being quite drastically pruned back it would be nice to think that possibly the specialist defence media would be once more allowed to provide independent British Forces coverage, naturally with the assistance of uniformed personnel in the way most other NATO nations encourage… and as Britain used to do in the pre-‘spin’ era.