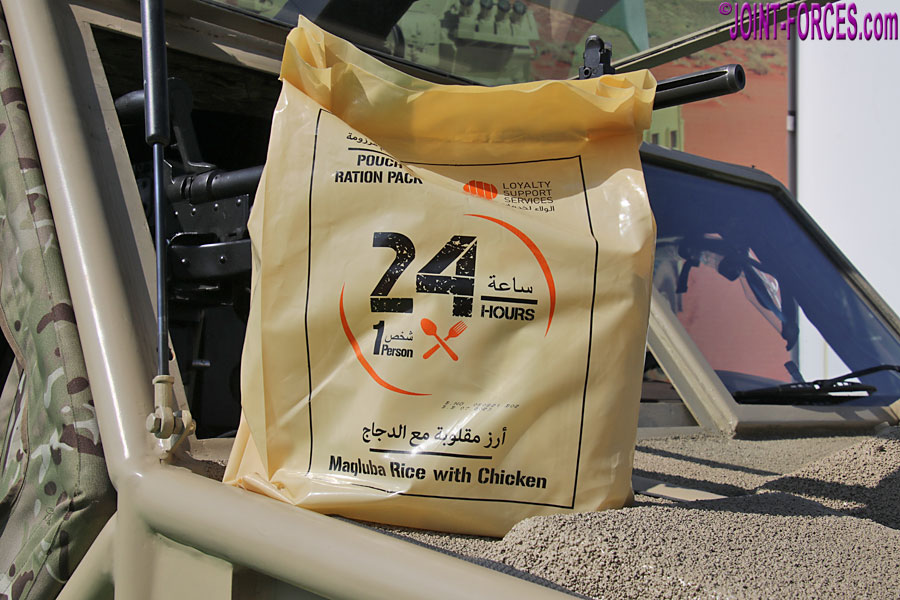 For several years the Arab Ready Meals (ARM) Jordanian-Malaysian joint venture produced ration packs primarily geared to Middle East tastes and cultural requirements, but by SOFEX 2018 they were no longer on the scene and I was unable to ascertain which company was going to be fulfilling Jordan’s requirements for individual military meal packs. The 2020 iteration of SOFEX, the Special Operations Forces Exhibition, was postponed after the infrastructure of the original site in Marka was badly affected by unprecedented rainfall and then the COVID-19 pandemic caused its cancellation, but earlier this month SOFEX 2022 was convened in Aqaba and the new Jordanian ration suppliers, LSS, were in attendance.

LSS (Loyalty Support Services) has been around as a supplier of catering, cleaning and facility management services for many years, and indeed their staff have regularly fed me at KASOTC (King Abdullah II Special Operations Training Center) each time I visited to cover the Annual Warrior Competition. With over 8,000 employees the company is well-established on the Jordanian food supply and hospitality scene, and indeed on their website they even carry testaments from senior American and British officers whose troops they have catered for on pre-ops training missions, so it was probably only logical that they should create a specialist LSS MRE Division to meet the specialist combat ration requirements of the MENA (Middle East and North Africa) Region and plug the void left when ARM production ceased.

The accompanying photos, taken at SOFEX 2022, should hopefully give readers an idea of the range and scope of LSS MRE products. The company has also given me a current issue 24 Hours 1 Person MRE ~ Mansaf with Lamb in the Tray Ration Pack version ~ which I will review in detail at a later date. First, however, I need to write up and publish my review of the latest Estonian 24-hour ration pack which my colleague Carl brought with him on a recent trip to the UK.