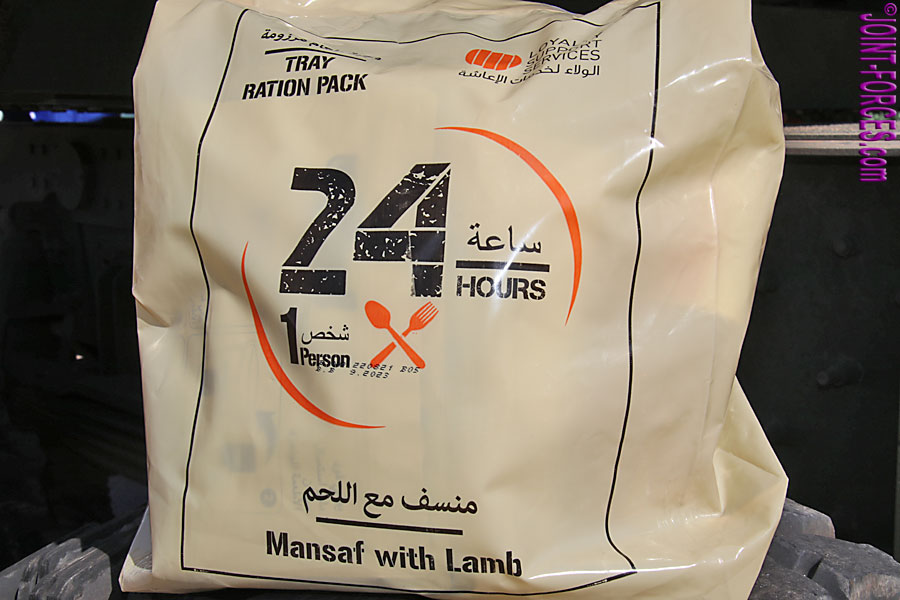 It is fair to say that I enjoy traditional Arab / Middle East cuisine almost as much as I like an Indian or Nepali meal at the end of a long day, so when the girls on the Loyalty Support Services stand at SOFEX 2023 in Aqaba offered me a sample 24 Hours Ration Pack I willingly accepted their gift. However rather than delving straight in, I set it to one side until the weather here in the UK turned really grim and then used it to trigger memories of warmer times spent out at the head of the Red Sea.

Rather than bore readers who have seen my introductory article on the company and its products, I will refer those who have not to Jordanian LSS MRE Ration Packs and then jump straight into a description of the contents of the 24 Hours Menu 5 pack with Mansaf with Lamb as the main meal. At this point I should mention that although Tray Ration Pack is printed on the front of the outer bag the contents were actually those of its Pouch Ration Pack equivalent. This error was pointed out to me at the time and I was offered retort pouch Maqluba Rice with Chicken or Freekeh with Chicken or Kabseh Rice with Chicken as an alternative, but I declined as I fancied trying out the lamb dish in the issue retort pouch version.

Inside the light tan heavy duty plastic outer bag one finds a clear polythene three-compartment packet, labelled Breakfast / Lunch / Dinner, an Accessories pack, and a pack containing a reusable Turkish-produced Flameless Ration Heater with two heater pads. Total calorific value, if all edible components are consumed, is 2558kcal and shelf life is twenty-four months; my Menu 5 pack was produced on 23rd August 2021 with a Best Before Date of 09/2023.

The Menu 5 Breakfast consists of 150g Hummus, 25g Tabbouleh Dressing, 30g Olives & Pickles, 150g Bread in the form of Tortillas, 40g Salted Crackers (Biscuits) and a 30g tube of Strawberry Jam. The pack of six tortillas (which are a substitute for the more traditional nan-like flat bread, is intended to be spread across all three meals and although it does not say so on the contents list I suspect the same would go for the pack of small biscuits. My pack of biscuits was actually unsealed inside the Breakfast bag, which is unsurprising as it had passed through two sets of airport baggage handlers when in transit, so just to be on the safe side I only nibbled the one at the very bottom to get a trial taste and it was actually okay. However as there is a warning on the outer not to “consume swollen, leaky and damaged products” I erred on the side of caution and put the rest in my food waste.

Of the three meals in each ration pack, Lunch is the more substantial with 1061kcal provided by the main components. The 250g Mansaf Rice with Lamb and 100g Mansaf Yoghurt are supplied in retort pouches for the main course with a 30g Date Bar for dessert, plus 30g of Dates and 30g Salted Peanuts are included for snacking. Mansaf is a traditional Jordanian dish of lamb and white rice drenched with yoghurt and eaten with the fingers and/or flat bread; in this case tortillas are substituted as they keep better. Normally in the desert Mansaf would be ceremonially served on a large platter for communal eating, with the cooked lamb carcase presented on a bed of yoghurt-infused rice; I reckon LSS have done pretty well with their ration pack equivalent. The salted peanuts were not as oily as their British equivalent and were probably healthier, and the date bar was very tasty. At first I was a little hesitant about trying the vacuum-packed dates, as they looked very dry through the polythene, but actually they turned out to be both moist and tasty. All-in-all I really enjoyed this lunch.

The Dinner, at 773kcal, is the second largest meal of the day and in this case consisted just of 150g White Beans with Sauce and 200g White Rice, plus the last of the Tortillas (and Crackers) from Breakfast. The sauce here was tomato-based and quite watery, but tasty enough when combined with the rice. However I seasoned mine with the ground black pepper from the Accessories Pack to give it a little more kick. In the field I would have added the beans in sauce to the rice retort pouch and eaten it from the pouch with the provided spoon, but for better photography I tipped both into my WildO Camp-A-Box bowl.

In addition to the 24 Hours Ration Pack, I also took away an individual Kabseh Rice with Chicken tray meal from SOFEX to try out this alternative. Weighing 250g, this foil tray provides 448kcal of energy. I used the Flameless Ration Heater or FRH to heat this one and I also heated 200ml of water in a Beverage Heating Bag to reconstitute the 3-in-1 Coffee. This is the first time I have tried a Turkish FRH, which can be used twice, and I found it to be very efficient. As for the Kabseh, which is probably my favourite of all the traditional Jordanian / Arab dishes, I really enjoyed it and was surprised by the subtlety of flavour in this mass-produced packaged long-life meal. Highly Recommended.

¤ For my next review in this section, Carl has managed to get me a sample of the current issue German Einmannpackung which he picked up on a recent exercise.