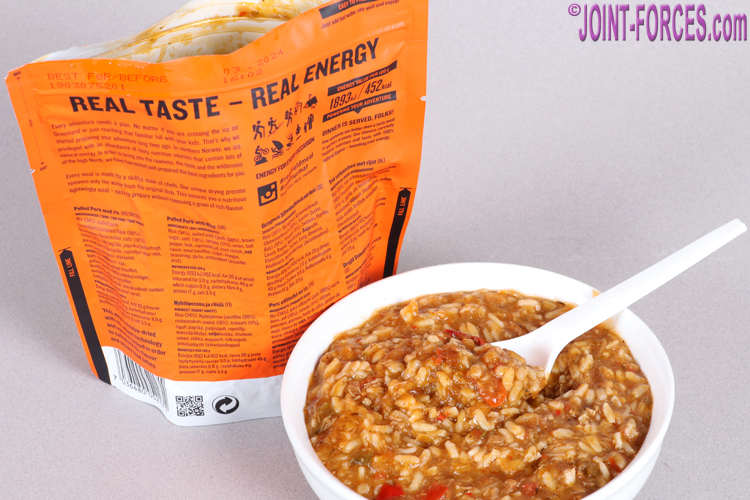 We have previously taste-tested meals and snacks from Troms-based Drytech AS, Norwegian manufacturers of the REAL Turmat range of expedition foods, as these products for the basis of Norway’s Arctic Field Rations, but as individual components are now widely available from good outdoor shops in the UK our focus here is purely on individual components rather than on complete ration packs.

The Drytech REAL freeze-dried meal pouches can be found with one of two labels: REAL Turmat, which translates as Tripfood, is the civilian range and has either Orange (21x main meal), Light Grey (2x breakfast) or Light Yellow (2x soups) packaging; and REAL Field Meal is the military range, which currently has 19x main meals in Light Olive packaging and 3x breakfasts in Light Grey. The main meal featured here, generating 547kcal when reconstituted, is the new Pulled Pork With Rice from the Real Turmat range but, as of next year, this will also appear in the REAL Field Meal range and will be found in some Norwegian Arctic Field Ration packs. I tasted this dish at OTS 2019 and was so impressed that I requested a full sample. Guess what I had for dinner last night? It was excellent.

The REAL Turmat and REAL Field Meal freeze-dried breakfasts are all cereal-based, mostly muesli but there is also a porridge, and these generate around 450kcal of energy from a 350g (when reconstituted) pouch. I was given the Chocolate Muesli, which is not really to my taste, but I know somebody who will award me Brownie Points when I tell her what’s for breakfast one Sunday morning when I can’t be bothered to cook. I have previously eaten other REAL Turmat / Field Meal (fruit) muesli pouches and found them to be both satisfying and tasty.

Drytech also market a range of REAL ‘On the Go‘ snacks, including energy/protein bars, chocolate bars, dried beef, and energy drink powders. Featured here are the 40g Cranberry Protein Bar and the 40g Caramel Energy Bar, both of which are produced in Switzerland for the Norwegian company and each generates about 160kcal. The 25g Dark Chocolate Energy Bar is also Swiss-made and this generates about 130kcal. The 25g Beef Snacks are jerky-type dried marinated strips of beef which generate 85kcal per pack. I have already nibbled away at the Chili & Garlic pack and enjoyed it, but I am trying to hold onto the Salt & Pepper pack until I really need it as it is in-date until late 2021.

It is my intention to look at freeze-dried meals from SUMMIT TO EAT and dehydrated meals from FIREPOT in follow-up reviews.