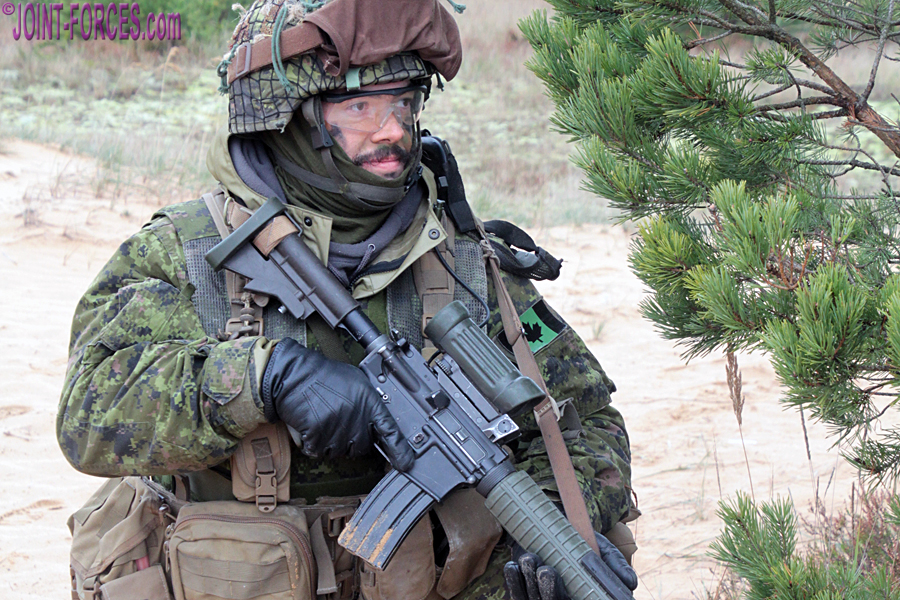 In this final part of the mini-series on Canadian rations we look at IMP or Individual Meal Packs issued to troops on NATO eFP duties in 2017, writes Bob Morrison.

The Canadian Ration Individuelle de Combat or RIC, the Individual Meal Packet or IMP in English, is a bagged rather than boxed ration which provides the soldier with a minimum of 1,200kcal to provide sufficient nutrition for one of their three daily meals. The RIC/IMP we are focussing on in this third part of the mini-series was from a batch issued to troops from the Princess Patricia’s Canadian Light Infantry (PPCLI) deployed to Latvia in 2017 as part of the lead nation contingent of the NATO eFP (enhanced Forward Presence) multinational battlegroup.

As I have covered 2007/8 and 2013/4 production batches of Canadian rations in FR63 and FR64 I will not repeat the full story but instead I am just focussing on this Supper pack from the 2016 batch to bring our ration aficionados a little more up to date. For those who have not read past articles, Canada supplies its meals in stout foil bags with a tan paper outer, as opposed to the tough plastic used for US MRE-style packs, and as of 2016 there were 21 menu choices available in the standard range to theoretically allow the possibility of a complete week’s worth of three meals a day without repetition; seven of the menus had contents more usually associated with breakfast time, e.g. cereals and bacon &/or baked beans dishes, with heavier main courses (entrées in Canadian and American parlance) plus deserts for the dinner packs.

This Menu #12 from the 2016 production batch (note IMP 16 RIC printed on the bag) had a Pulled Pork (310g) entrée and a Date Square (116g) desert; both retort pouches, which were protected by cardboard cartons inside the outer bag, were produced by the Canadian arm of the Scottish food manufacturer Baxters. The bag also contained a pre-sliced Burger Bun, which I would describe as being more like a sweet sponge than a bread roll, a sachet of Strawberry Jam, a sachet of Peanut Butter and a foil pack of Reese’s Pieces peanut butter candies (if unfamiliar with these sweets, they look like chocolate Smarties and have similar texture but taste of peanuts).

Both retort pouch items could be eaten hot or cold, though heating first is of course more satisfying, and unlike freeze-dried rations they required no water to reconstitute. Water was, however, needed for the drinks included in this ration. These were a sachet of coffee powder with accompanying sugar and creamer sachets, and a sachet of Lemon-Lime Sports Drink powder; a zip-sealed mixing bag for the beverage powder was also included. Accessories consisted of a white plastic spoon, a freshening wipe, a brown paper towel, a sachet of hot pepper sauce, a book of matches and a little pack of tic tac mints.

As always, I taste tested these rations. My overall impression is that Canadian packs are satisfying, though possibly a little bland for my tastebuds but much tastier than their US equivalent. Shelf life is given as three years, but if stored properly they should remain edible for much longer. These rations are not intended for resale so are not particularly easy for Preppers to source. Tip: when attempting to ‘proff’ rations packs for review while on exercise, if I cannot find the quartermaster I usually approach infantry vehicle crews because they are more likely to have spare meals in the cartons.

Footnote: Originally Canadian ration packs were marked as Breakfast/Lunch or Lunch or Dinner and the printing on the outer bags was colour coded. By 2016 the print colours and differentiation between the intended meals had been dropped as the packs contained pretty much the same nutrition balance and calorific value (1200kcal) meaning there was no real penalty if the soldier chose to eat three breakfasts or three dinners in the same day out of taste preference or necessity.