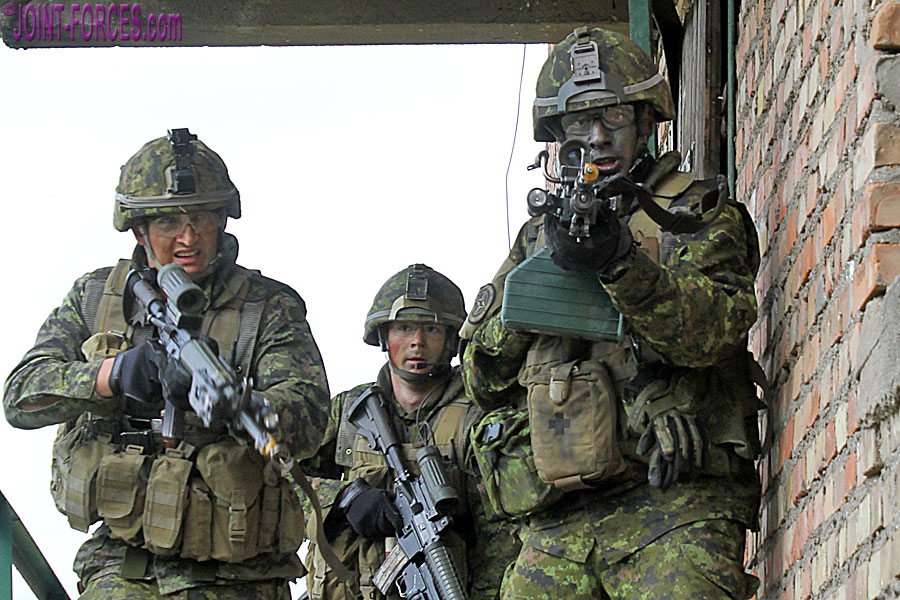 The Individual Meal Packets featured were issued to Canadian troops in Europe on Ex. ANAKONDA 16 in Poland (here) and Ex. COLD RESPONSE 16 in Norway [©BM]

In this second of a three-part mini-series on Canadian rations we look at IMP or Individual Meal Packs issued to troops on exercise in Europe in 2016, writes Bob Morrison.

While covering multinational exercises in the first half of 2016 in Norway and Poland respectively both Carl and myself were offered spare Canadian Individual Meal Packets on exercises, which gave me an opportunity to update my first article on this topic where I covered a ration pack issued in Afghanistan in 2009. Although issued in the field in 2016, the two packs featured here were actually packed in 2013 or 2014, hence the IMP 13 RIC on the Breakfast Menus and the – 14 – markings on the others.

The Individual Meal Packet or IMP, Ration Individuelle de Combat or RIC in Canadian French, had not changed very much since the 2007 and 2008 production batch Menus we looked at in FR63, but there were minor changes as the Department of National Defence team responsible for field rations ran a three-year research and development cycle with the aim of introducing three to four new main meal recipes each time in addition to tweaking the minor items. By 2016 there were now 21 different menus, seven Breakfasts and the remainder Lunch/Dinner packs.

Canadian rations are intended to have a minimum three year shelf life, though as long as the retort pouches are not damaged they should theoretically last for as long as tinned food, so these were just within date. The Best Before End date of the commercial chocolate confectionery items had been well and truly exceeded but, other than a little oxidisation of the outer surfaces, they taste okay and were edible; note that Best Before End means precisely what it says and is not an indication that the food item, assuming properly stored, would be inedible beyond that date.

With just 21 menu options the IMP only provides one week of menu variety for the Canadian soldier but, having said that, as they are issued by the individual packet rather than in 24-hour packs the weekly running order can be swapped around for variety. I have not yet found a full list of Menus, but I understand vegetarian options are available and these are produced to be acceptable to those with either Halal or Kosher dietary requirements.

The four meal packets that Carl and myself ‘proffed’ consisted of two Breakfast and two Lunch/Dinner variations, each of which was enclosed in a brown paper sack with a very tough foil liner; I found the easiest way to open these was to go in through the base. Breakfast Menu #2 contained Hash Brown Potatoes & Bacon plus Pineapple Tidbits With Syrup as its main constituents; both were supplied by The Wornick Company of Ohio who are one of three primary US MRE pack suppliers. Breakfast Menu #3 had Baked Beans plus Sliced Pears in its two retort pouches; both were produced by the Baxters Canada wing of the Morayshire soup and preserves manufacturer. Turning now to the Lunch/Dinner packets, Menu #11 had Chicken Cannelloni as the main with a 125g Date Slice as dessert, both produced by Baxters, and Menu #14 contained Turkey Stew with Mango Peach Apple Sauce as dessert, both manufactured by Wornick.

Breakfast #2 also contained a 50g pouch of Banana Oatmeal and Breakfast #3 contained a similar packet of Apple & Brown Sugar Crunchy Cereal; unlike the retort pouch meal components these required water, hot or cold, to be added to reconstitute. Lunch/Dinner Menu #11 contained a 50g vacuum pack of Beef Jerky and Menu #14 included a 45g packet of Cheese & Broccoli Rice which required hot water to reconstitute and eight minutes standing time; not to my taste, I initially gave the latter a miss but eventually I bit the bullet and it didn’t kill me.

All Menus also contained a bread packet of some form, along with 20g Raspberry Jam and Peanut Butter sachets to spread on it. Two meals contained a 57g miniature bread loaf, one contained a 57g hamburger bun and the last contained two soft tortillas totalling 62g. I found the bread and the bun to be very sweet and more like a dry sponge in consistency than a bread product, but this is the price which has to be paid for a minimum three-year shelf life; caution, don’t eat the Oxygen Absorber in the bread or jerky packs! The Lunch/Dinner packs also contained a commercial brand chocolate (candy in North American parlance) snack.

Each IMP/RIC also contained all the usual accessories one would expect to find in a modern combat ration and rather than listing them I will just refer you to the photos. The only thing possibly slightly out of the ordinary was the lined Beverage Bag included in each ration. A Flameless Ration Heater was issued separately.