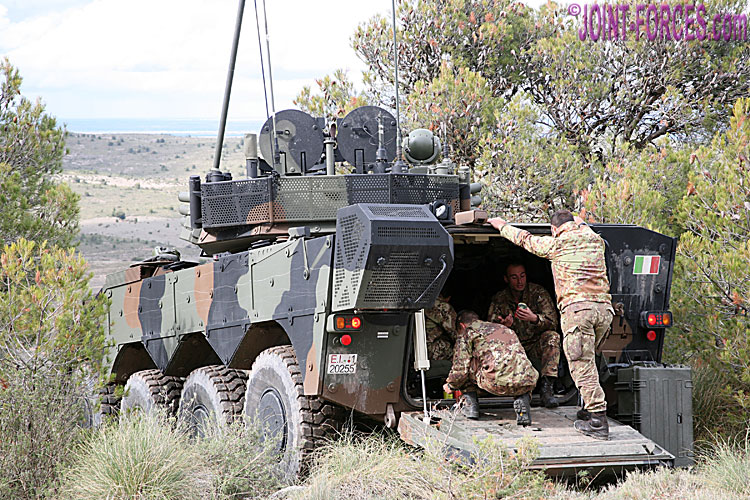 This Field Rations article has to be, I am afraid, mostly observational as I was unable to bring home these Italian Razione Viveri Da Combattimento packs, writes Bob Morrison.

Current Italian Armed Forces combat ration packs have not changed very much from those issued in 1992, when I first sampled spare items offered by ACE Mobile Force gun crews while on a lunch break alongside the Tejo River near Tancos in Portugal, though the configuration was modified slightly in 1996/7 and has been tweaked a little every few years since.

A revised technical specification (316/U.I.) for the Razione Viveri Da Combattimento, or Combat Food Ration, was issued in June 2012 and the Module G ration I photographed in Chinchilla in November 2015, during TRIDENT JUNCTURE 15, was to this specification. At that time a total of seven different 24-hour packs, one for each day of the week, were produced; each consisting of Breakfast, Lunch and Dinner courses packed in individual white cardboard cartons in a tough green six-layer polyester and aluminium foil laminate outer pouch. Each Menu, which the Italians call a Module, bore a letter between A and G and each was also colour coded; in addition to a large circular spot on the foil outer pouch, the label on each inner carton was the same colour. The primary pack illustrated here was Module G, colour-coded blue, and it appeared this was the only menu being eaten by the crew of the Freccia IFV I chanced upon one lunchtime during TRIDENT JUNCTURE.

As the troops were out in the field for several days and only had sufficient ration packs for the duration, I was not able to liberate a sample for taste-testing back home but I did photograph the contents of one pack which they specifically opened for me. The Breakfast carton, which is the smallest of the three meals, also contained the Accessories and the Lunch carton was the largest of the three; in the Mediterranean region where an afternoon siesta is often the norm it is lunch, rather than dinner, that is often the main meal of the day.

Many NATO countries have gone over to retort pouches, or freeze-dried packs if operating under Alpine or Arctic conditions where water is freely available, but the Italians still include a number of tinned products. This makes their 24-hour packs heavier than the UK equivalent, and most references put them as tipping the scales at around 2.8kg for the full daily complement. Canned foodstuffs normally have a much longer shelf life than retort pouch meals, which can be an advantage for survivalists or preppers, but for military ration packs this is not an advantage as other edible components required to ensure a balanced diet usually limit pack life to around two years; which indeed is the case with standard Italian military rations.

Looking first in detail at this 2014 production batch Module G ration, contracted in 2013 and with an expiry date of 18 September 2016, the Lunch cans were Tortellini al Ragù (ring pasta in meat sauce) and Wurstel (small Vienna sausages) plus Macedonia (fruit salad). The cans for dinner were Tacchino (Turkey) and Insalata di Riso (a rice salad dish containing ham or tuna plus olives). Sweet biscuits were included for Breakfast and savoury crackers for the other two meals. A large boxed tube of sweetened condensed milk paste found in the Breakfast carton was intended to last all day, both as a creamer for coffee and as a spread for the crackers. Two packs of fruit jelly sweets were also issued in the Breakfast carton for snacking, as was a bar of dark chocolate. Bran tablets and multivitamins were issued for Lunch, and an energy bar was included for Dinner.

The only drinks were one powdered coffee sachet per meal, with one sugar sachet for each. Three disposable toothbrushes with a small tube of toothpaste were included in the Breakfast carton, as were a field cooker with hexamine fuel tablets and matches, one plastic spoon, two plastic cutlery sets of knife / fork / spoon, six napkins and three brown paper sacks for rubbish. As is only to be expected, each Module varied slightly in food contents, but in essence all were quite similar to Module G with the attempt at daily variety being simply a result of mixing and matching quite a small selection of cans. I suspect meals for Italian troops on long exercises or deployments might have become rather boring after even just a couple of weeks in the field.

I next ran into Italian troops eating Razione Viveri Da Combattimento 24-hour packs in the field during TRIDENT JUNCTURE 18 in Norway, where a few were taking the opportunity to grab lunch while their vehicles were refuelled in a lay-by during a convoy move north. My primary focus was the vehicles in this small convoy, but spotting one of the guys preparing his lunch I grabbed the opportunity to quickly snap this too. His ration pack was Module B from the 2017 production batch, with an expiry date of 7th August 2019.

The two main Lunch cans, which he was heating side by side on a camping gas cooker and the issue fuel tablet cooker were Insalata di Riso and Ravioli Al Ragù. Every Italian ration pack I have seen over the last decade or so has been packed by AR Foods Srl. and the bulk, though not all, of the food components also appear to have been produced by this company. Their own brand main meal cans have very simple single base colour labels which make them quite easy to identify at a glance, but these don’t exactly stimulate the taste-buds. As for the primary contents, some of which from time to time over the years I have been able to try for myself even though I have never been in the position to bring a complete Module home, they were okay if somewhat bland and stereotypical.