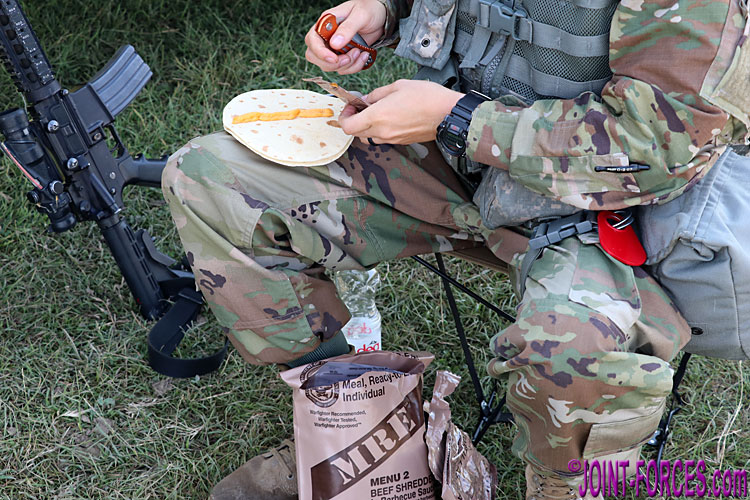 In this ninth article on the MRE I am looking at a proper XXXVII ration pack I believe to be slightly more representative of the 2017 production batch, writes Bob Morrison.

In my Field Rations article No.28, published back at the start of this year, I looked at a US Army MRE packed in 2017 but which actually consisted of items produced in late 2016. The Menu 2 MRE focussed on here was packed in 2017 and comprised edible components prepared early in the fourth quarter of that year so is a proper XXXVII batch ration.

This year I have been fortunate to work with US Army units: on the Continental United States, at Yakima in Washington State, during JOINT WARFIGHTING ASSESSMENT 19; in Romania, during Exercise SABER GUARDIAN 19; and in Ukraine, during Exercise RAPID TRIDENT 19. On all three exercises the participating troops were issued with MRE ration packs and, as luck would have it, these were from the XXXVII, XXXVIII and XXXIX batches respectively. This little bit of good fortune means I have been able to not only sample a meal pack from each of the last three production year batches under identical conditions, but have also been able to photograph them in the same fashion for this section of the website. It is possibly worth mentioning that I sampled other MREs out in the field during the course of 2019, in less clinical conditions, but for this area of our website I try whenever possible to photograph and consume in near identical conditions.

Although the basic premise of the MRE has hardly changed over the 39 years that these rations have been in production, the US Defense Logistics Agency continually tweaks the contents slightly in response to user feedback, though the XXXVII / 2017 year batch menu contents were not significantly different from the XXXVI / 2016 batch; indeed the only change highlighted on the list in my possession is a slight wording change for the main meal pouch in Menu #24. The example featured here is Menu #2, which appears to a firm favourite with many troops and has remained unchanged through the last five production batches.

According to the official listings, the XXXVII Menu #2 outer tan pouch should contain: Beef Shredded in Barbecue Sauce; Black Beans in a Seasoned Sauce; Cheese Spread, Cheddar, with Jalapeño Peppers; Tortillas, Plain; Cookies; Beverage Powder, Carbohydrate, Fortified; Barbecue Sauce; Accessory Packet C ; Spoon; Flameless Ration Heater; Bag, Hot Beverage; and a Paperboard Sleeve. The first two items on that list are retort pouches which can be consumed cold, but are best eaten hot, and the Flameless Ration Heater plus Paperboard Sleeve are provided to allow this; once I clear the backlog of Field Rations articles I promise to pen a separate article on the FRH. The two Tortillas – Mexican-style flatbreads – are sealed in a foil pouch and could be used to make a couple of Mexican wraps if the soldier has the time, but it is not uncommon to see them being eaten with the Jalapeño cheese spread. Alternatively, the cheese spread could be eaten with the Oatmeal Cookie (the two alternative cookies which can be found in Menu #2 are Chocolate Chip and Oatmeal Chocolate Chunk).

As each individual MRE Menu is carefully balanced to ensure a consistent dietary mix of calories, proteins, carbohydrates, sugars and salts etc., there can be additional components in each different pack. For example in Menu #2 the beverage powder, which can be Lemon-Lime, Orange, or Tropical Punch flavour is fortified with carbohydrates and Vitamin C to give 11% and 80% of daily requirements respectively. A 28g sachet of Barbecue Sauce is also provided and close inspection of the printed nutrition info shows this provides 9% of the daily requirement of sodium (i.e. salt). At the risk of becoming a bore, it should be stressed that all edible components of a ration pack should be consumed to derive maximum dietary benefit.

An Accessory Pack, one of three variants, is always included in an MRE pouch and in XXXVII Menu #2 this is Pack C which consists of: Coffee Powder, Creamer, Sweetener, Chewing Gum, Toilet Tissue, a Moist Towelette, and Iodised Salt. The previously mentioned Barbecue Sauce sachet was also included in this accessory pack. As previously mentioned, an individually wrapped spoon is also supplied in the the MRE pouch, as is a resealable Hot Beverage Bag and a Flameless Ration Heater.

In the past I have passed comment on how US Army MRE dishes can sometimes be a little bland for British tastebuds, but this Menu #2 definitely bucks this trend as both the shredded beef in barbecue sauce and the black beans are quite fiery, and the jalapeño cheese spread is pretty hot too. I really enjoyed this one.

My next two articles in this series, if all goes to plan, will look at MRE XXXVIII Menu #15 and MRE XXXIX Menu #20. After this I plan to open and taste an early 2017 Meal Individual Halal.

Featured, Field Rations, Meal Ready to Eat, MRE, ration pack, Rations, US, US Army
You may also like