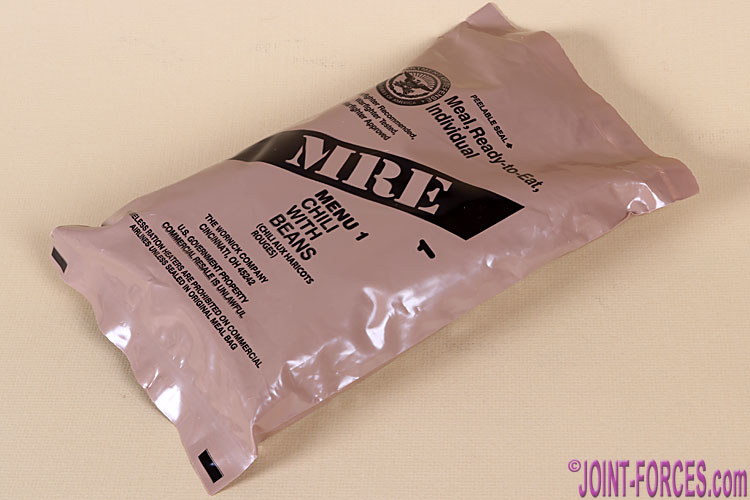 To conclude this run of MRE articles, for the moment at least, I am moving forward to the XXXVII batch of US rations packed in 2017, writes Bob Morrison.

The MRE featured this month which I picked up in the summer of 2018 was, according to the date printed on the cardboard meal outer case or carton, packed in 2017 but from date stamps on the individual packaging for edible contents I was able to determine that most had been produced in late 2016. 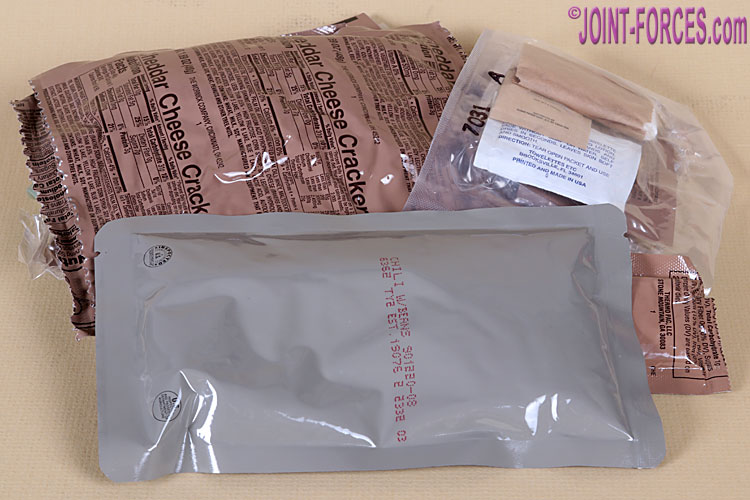 Stack of contents carefully slipped out of outer pouch [©BM]

As previously explained, a four digit system is used for dating foodstuffs with the first numeral being the last of the production year and the other three being the day of that year the foodstuff was made. In this case my Menu #1 main course, or entrée as the Americans call it, was marked 6362 meaning it came off the production line on 28th December 2016. The Cornbread, which for those who have not tried it is like a sweet sponge cake, was stamped 6344 showing it was baked on 10th December 2016 and the Vegetable Crackers carried the same date stamp, but the Cheddar Cheese Crackers snack pouch was stamped 7030 which tells us it was produced on 30th January 2017. 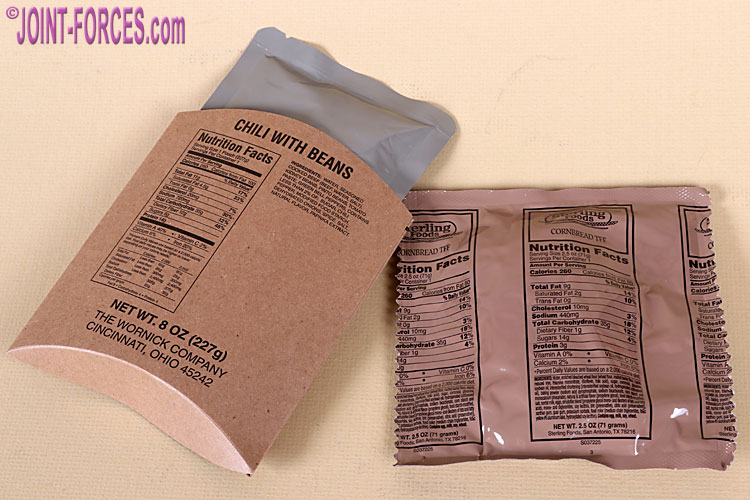 Content-wise this MRE is not significantly different from the 2014 or XXXIV pack described in Part 7 so I do not plan to go through it in any great detail, but having eaten it all yesterday, I have to reiterate that I really do feel our cousins from across The Pond are getting more adventurous with their taste buds. The Chili With Beans would probably rate three fiery peppers out of four on the UK supermarket scale and, even though not particularly generous on the beef/carne count, was right up my street. The sachet of Cheese Spread, which looks artificially orange, was also much more flavourful than I remember it and when spread on the Vegetable Crackers (flavoured with carrot, celery, onion, red & green peppers and tomato) was really enjoyable even though it looked like it might make a good emergency Air Ident panel as I reckon that colour could be seen from the other side of Dartmoor. 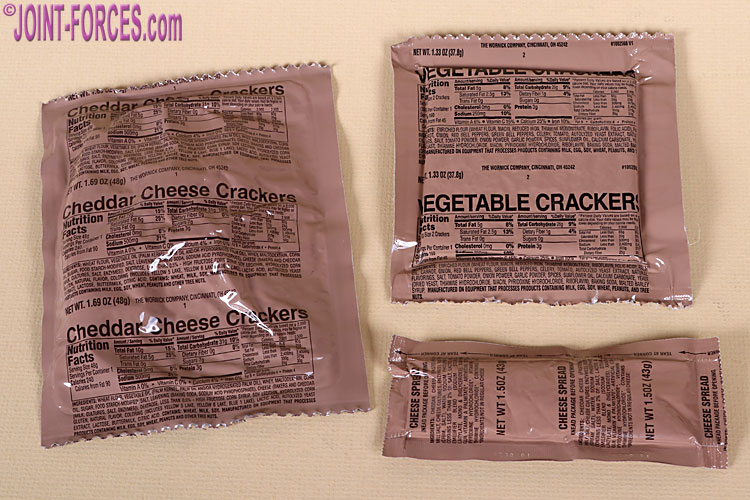 From published US Defense Logistic Agency material it can be determined that the MRE XXXVII contract was awarded on 21st October 2016 and scheduled for deliveries between January and December 2017. The award was split over the three prime suppliers with AmeriQual assigned 35%, SoPakCo 45% and Wornick 20% this time around. Projected quantity was 2.5 million cases (of twelve menus) and total contract value was $202,031,750 giving a unit price per MRE of $6.74, including accessories and Flameless Ration Heater. However the upturn in projected military operations, possibly caused in part by the return of significant numbers of US troops to Europe to reinforce the NATO Alliance in the light of Russian expansionism, saw an add-on contract requirement for 800,000 cases being announced in the spring of 2017. 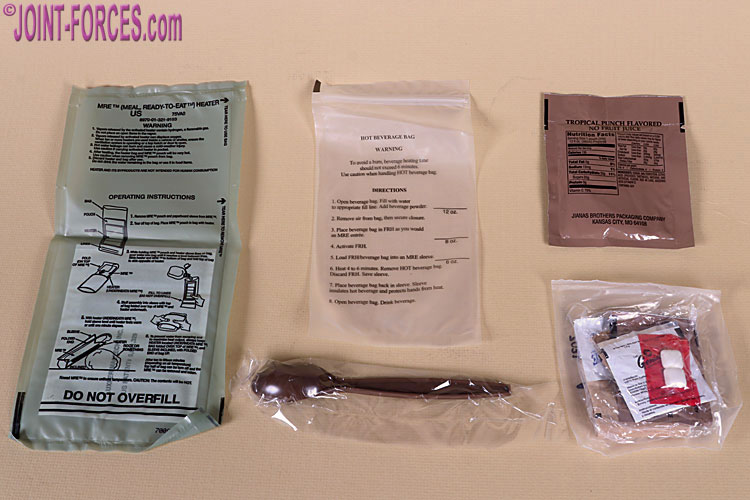 In this series we have only looked at the mainstream MRE types and not at the Pork-free Kosher/Halal versions which are procured under different contracts. As of 10th May 2017, 381 cases of Kosher and 605 cases of Halal XXXVII MREs had been delivered plus another 942 cases of special occasion Kosher Passover Meals had also been delivered. Much as I would like to try all of these out, as they are issued in much lower numbers, mostly to individual operationally or exercise deployed personnel, they are naturally very difficult to source (if anyone reading this can help I’d be most grateful). 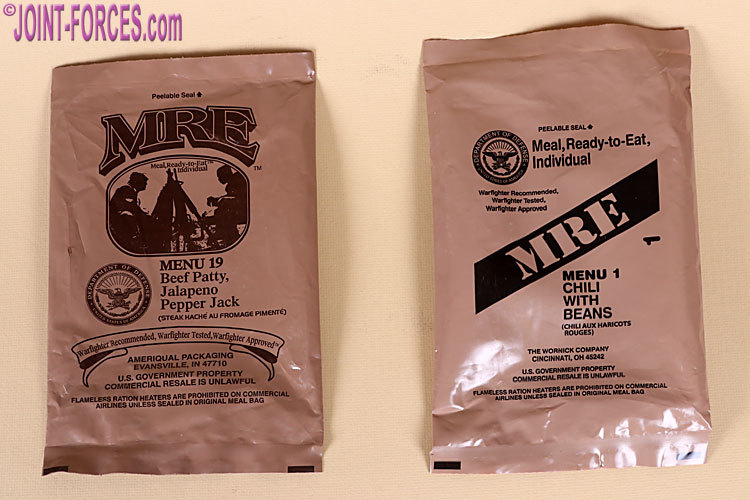 In previous articles I have mentioned that the colour of the MRE outer bag changed, back in 1996 from brown to a much lighter beige / tan / sand shade, and the printed design on the front face also changed at this time. This second design, see Part 2, with minor tweaks, remained pretty much the same until 2008 when three new designs were introduced and the the shade of the bag darkened; four menus from each case or carton of twelve should ideally carry the same pattern which, other than company name, is identical across all three primary suppliers. 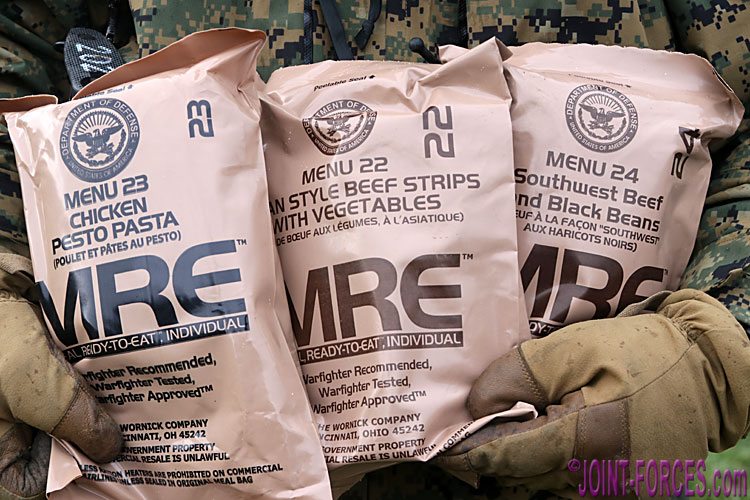 In most cases it is possible to identify the precise year of manufacture by: noting the outer bag colour and the outer pouch printed design; checking the Menu Number against the entrée description and secondary food item description, as there are minor menu variations each year; and then looking at the first digit of the four stamped on the meal pouch itself. This is not an easy process, and one wonders why they don’t just print/stamp a production date on each pouch, but I suspect this might simply be an attempt to stop soldiers quibbling about the freshness of what they are eating as without access to the annual menu lists precise dating is tricky. For example, it could be difficult to differentiate between Menu #1 from 2007 and from 2017 as Chili With Beans was the entrée both years and the first of the four digits could be 7 for a later production example from either year; for reference MRE XXVII had Mexican Corn as the secondary item whereas MRE XXXVII had Cornbread. If properly stored in the correct temperature range an MRE can be safely eaten many years down the line, and there is a very big difference before Best Before End and Do Not Eat After dates, so manufacture and packing dates are not as important to rations as they are to supermarkets aiming for a very fast stock turnaround.

Right, that’s enough on the MRE topic for now as I have some Norwegian (REAL) and Polish (KADAR) ration items, mostly freeze-dried, to taste test. I will, however, take a look back at the associated US MARC (Meal Alternative Regionally Customized) once I have worked my way through the backlog of tasty treats and assuming nothing more exciting pops up first. 2017 Chili With Beans is mostly beans, with peppers and a little beef, and is quite fiery [©BM]  🙂