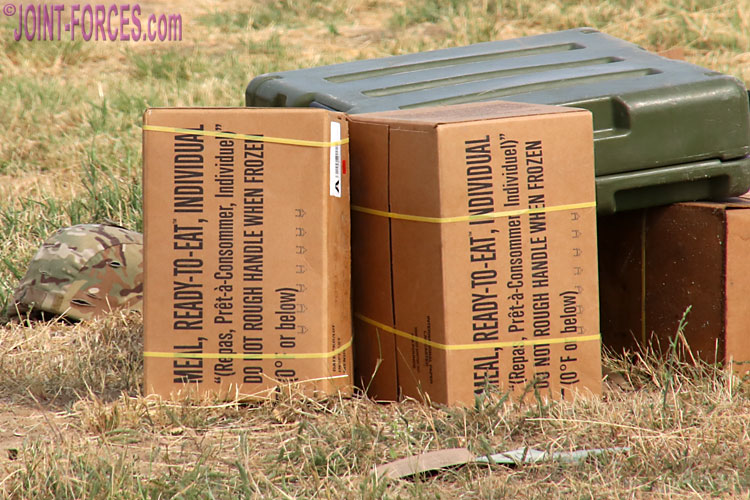 For this tenth article on the US MRE evolution I am looking at a Year 38 or XXXVIII batch ration representative of the 2018 production contract, writes Bob Morrison.

As previously mentioned, during 2019 I have been fortunate to work with US Army units on field exercises ranging from Yakima in Washington State in Northwest America (BAYONET FOCUS / JOINT WARFIGHTING ASSESSMENT) to Romania (SABER GUARDIAN 19) to Ukraine (RAPID TRIDENT 19) and across these three exercises I was given in-date sample meals from the XXXVII, XXXVIII and XXXIX year batches.

If curious about the Roman numerals used to date MREs, the first annual MRE (Meal Ready to Eat) batch was produced in 1981 and the following year’s annual production was logically designated Batch II. This nomenclature has continued to this day meaning 2018 production is classed as Batch XXXVIII (i.e. 38) and the current 2019 production is Batch XXXIX (i.e. 39). The meal I have focussed on here is MRE XXXVIII Menu #15, Mexican Style Chicken Stew, which I was given by the US air defence gunners of 5-4ADA during Exercise SABER GUARDIAN 19 on Capu Midia ranges on Romania’s Black Sea coast. Taken from Carton B (Menus #1 to #12 of the 24 are in Carton A) which I consider to have the better choice of interesting meals, this particular menu has a Hispanic flavour to it.

Now to the taste test. I found the Mexican Style Chicken Stew to be hearty enough, though there was too much polystyrene-like sweetcorn for me and I thought the dish to be a bit bland for my palate; with hindsight, I should probably have added the crushed red pepper. The dessert pouch contained good quality fruit cocktail in grape juice, which I enjoyed; though I must admit the thought of having this with a carton Devon custard from my fridge did cross my mind. I spread the jalapeño cheese on my crackers and enjoyed this combination. The cheese-filled snack was none other than my old friend Cheddar Cheese Pretzels. The First Strike Bar, which I have covered before, reminded me a bit of a gigantic berry-flavoured Opal Fruit and as I have a sweet tooth it didn’t hang around long once the wrapper was opened. Finally, I mixed the chocolate hazelnut beverage powder with 6oz of warm water; I am not a great fan of chocolate flavoured foodstuffs – that’s Ramilla’s department – but it was perfectly drinkable on a cold day.

Going by the date codes, which were mostly June or July 2018, I reckon this XXXVIII Menu #15 was most likely packed in late July or early August 2018 meaning it was less than one year into its three year shelf life when issued to the troops in Romania. In part 11 of this MRE series it is my intention to come right up to date with look at XXXIX Menu #20, issued to me in Ukraine in late September.